Dak Prescott once said that his brother told him the most dangerous position on the field was being "the quarterback ahead of you on the depth chart."

His brother wasn't wrong. Prescott earned the starting job in high school and college only after the original starter got hurt. On the Cowboys, Prescott was the third-string quarterback at the start of the 2016 season. It took injuries to Tony Romo and Kellen Moore for Prescott to even get a crack at leading the team.

But now that he's one of the faces of the franchise, he's making the most of it.

Prescott will only earn $540,000 from his Cowboys salary this season. Thanks to a bevy of off the field endorsements, though, he'll make at least an additional $2.5 million. 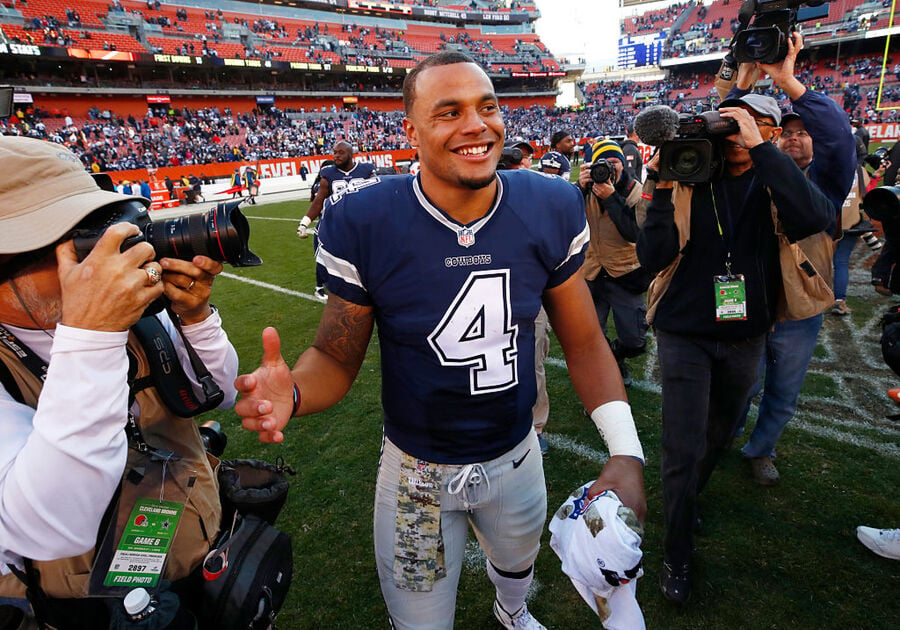 Part of the key to Prescott's success? He doesn't refer to his endorsements as deals, but rather his relationships. He puts the time and effort into nurturing the companies he works with, providing his input and guidance along the way. In return, the businesses are more likely to push for his success.

Prescott will wear Beats by Dre headphones before games and will rock New Era caps off the field. The company became the NFL's official cap in 2012 and is officially endorsed by Le'Veon Bell, Khalil Mack, Greg Olsen, Sterling Shepard, and now Prescott.

You'll also see him on DirecTV's NFL Sunday Ticket commercials, and he may appear in some local Dallas AT&T ads. AT&T has naming rights for the Cowboys stadium and owns DirecTV.

Prescott will be endorsing a ton of different food and beverage products, as well. He's partnered with Campbell's Chunky Soup and will appear in television and online ads for PepsiCo, who owns Frito Lay. The latter company's headquarters are in Frisco, not too far from Dallas.

Finally, Prescott will take to the skies as a promoter for Nicholas Air. All of these endorsements are on top of his deal with Panini, who resigned the quarterback to a new deal. Prescott autographed footballs are selling for $400.

The $2.5 million Prescott will earn doesn't account for licensing royalties. If he finishes the year in the top five in jersey sales, he can tack on another $250,000. That's looking likely, too – Prescott's gear was the third-most popular in the league in 2016, behind just Tom Brady and fellow Cowboy Ezekiel Elliott.

Prescott has already received a trademark on his own name, with a second one for using his name on athletic apparel pending. He's also filed a trademark for "D4K."

On the field, the Cowboys will look to build on their 13-3 finish and NFC East crown. If Prescott can keep up his solid play – he had 29 total touchdowns and just four interceptions last season – those endorsement opportunities will just keep rolling in.