Conor McGregor May Have Lost A Foot At UFC 264, But Thanks To His PPV Bonus… He Gained A Fortune

Conor McGregor hobbled away from UFC 264 with some good news and some bad news. The bad news? He lost a foot. The good news? With his Pay Per View bonus, he can definitely afford the hospital bill. He can actually afford a brand new bionic foot, though that may not be legal if he's planning to enter the octagon again some day.

On Saturday night Conor McGregor faced off against Dustin Poirier at UFC 264.

Saturday's event was the highly-anticipated third McGregor-Poirier fight. Conor won their first bout by knockout back in 2014. Dustin won the rematch just six months ago, also by knockout.

So as you can understand, there was a lot of hype for the third installment. It was time to settle the score once and for all.

And even though he was coming off a loss, Conor is still in another galaxy when it comes to star power, so he therefore earned a base salary $5 million, That was more than three times Dustin's $1.5 million guarantee.

As you may have heard, Saturday's fight ended in a very disappointing and gruesome way. Towards the end of the first round, one of Conor's feet basically broke off at the ankle as he took a step back. Conor claimed it was a freak accident caused by his own brute stepping force. Dustin claimed the foot fractured on an earlier kick landed by McGregor, a claim Conor vehemently denied before alleging that Dustin's wife has been slipping into his DMs.

In the end, Conor was carted off in a stretcher with his leg (and pride) in a splint. 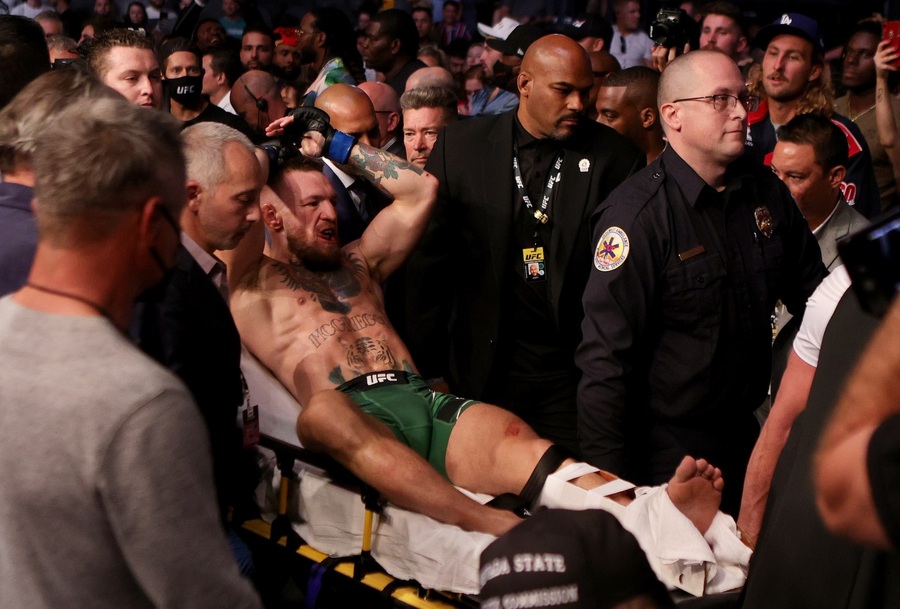 If this is Conor's last time fighting professionally, he's going out with a crack and a pocket full of cash.

As a result, Dustin Poirier earned a bonus of $3.6 million for total earnings of $5.1 million.

Thanks to his much larger star power, Conor McGregor's PPV bonus will likely land in the $18 million range, giving him total earnings of…

I'm not even sure why Conor was still fighting on Saturday. He doesn't even need $23 million. Conor has earned at least $150 million in the last 6 months, the majority of which came in April when he and some partners sold the beverage company Proper 12 for $600 million.

If I had a net worth of $200 million, the only cage you'd see me fighting in would be filled with K-Y Jelly across from 2-3 bikini clad women as opponents.