Comparing The Salaries Of Jimmy Garoppolo And Patrick Mahomes – Who Makes More?

Super Bowl LIV is nearly upon us and it brings together two teams at the top of their game. On one side, the San Francisco 49ers have given up just 252.5 yards this postseason, their defense supporting a rushing attack that was among the best in the league. On the other side, the Kansas City Chiefs have put up 86 points in their two playoff games and have one of the most exciting offenses in the NFL.

Both teams are led by young quarterbacks. Kansas City's Patrick Mahomes is just 24 years old, while San Francisco's Jimmy Garoppolo turned 28 in November. They've each helped their teams reach the biggest stage in football, but which one makes more money?

First, we'll hop into Garoppolo's contract. After spending the beginning of his career as a backup in New England, Jimmy G has gotten a chance to shine with the 49ers. In 2018, he signed, at the time, the largest contract by annual salary. Garoppolo's five-year, $137.5 million deal has given him $27.5 million per year. That makes Garoppolo the highest-paid player in Super Bowl LIV.

This year, Garoppolo is making $17.2 million. If he stays with the Niners for the rest of his contract, he's still due $72.1 million, per Spotrac. 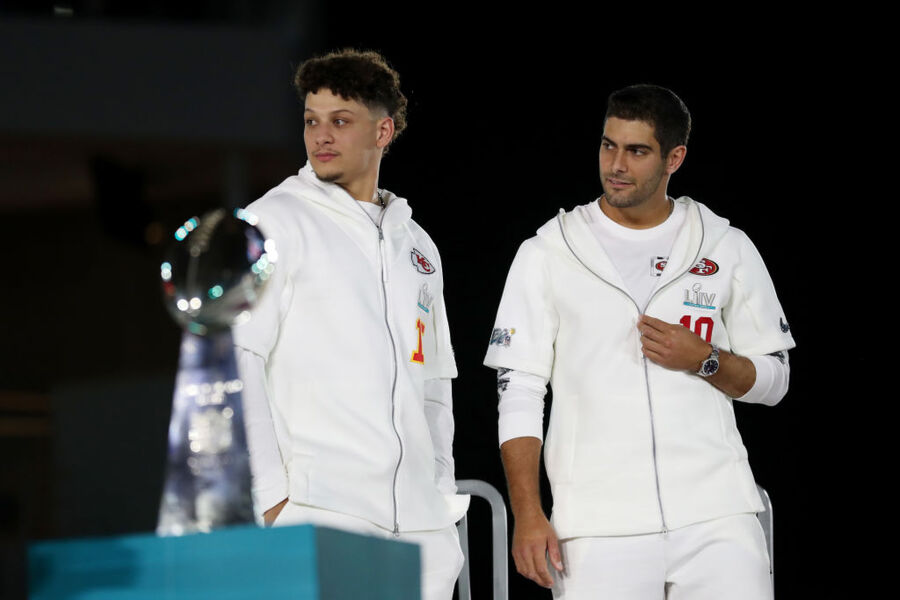 Next, let's look at Mahomes. He's on year three of his rookie deal, which is a four-year contract worth $16,425,786. While his average annual salary is worth about $4.1 million, the contract includes a signing bonus of nearly $10.1 million paid up front. Mahomes's deal also includes a fifth-year option, though the Chiefs have said they're already working on an extension for this summer. But we'll get to that in a bit.

By the summer, we'll likely be looking at this differently. Garoppolo will still be on his current deal, making a healthy $23.8 million in 2020. However, Mahomes will probably sign the largest contract in NFL history, which could be worth $40 million per year.

Whoever wins the Super Bowl will get a nice bonus, too. Per the NFL's collective bargaining agreement, each winning player receives an additional $124,000.

For now, Garoppolo is earning more money. But come the start of next season, Mahomes will likely be sitting on top. And by then, we'll know which one will be brandishing their very first Super Bowl ring.