The Philadelphia Eagles are Super Bowl LII champions after a thrilling 41-33 victory over the New England Patriots. Nick Foles, the game's MVP, led the team to its first Super Bowl title ever. Carson Wentz, meanwhile, was on track to be the regular season MVP, amassing 33 touchdowns and just seven interceptions through 13 and a half games before tearing his ACL.

But for all those successes, they're barely being paid like top quarterbacks.

Next season, Foles and Wentz will take up just a combined salary cap space of $14,875,365. That's less than 19 other quarterbacks alone. 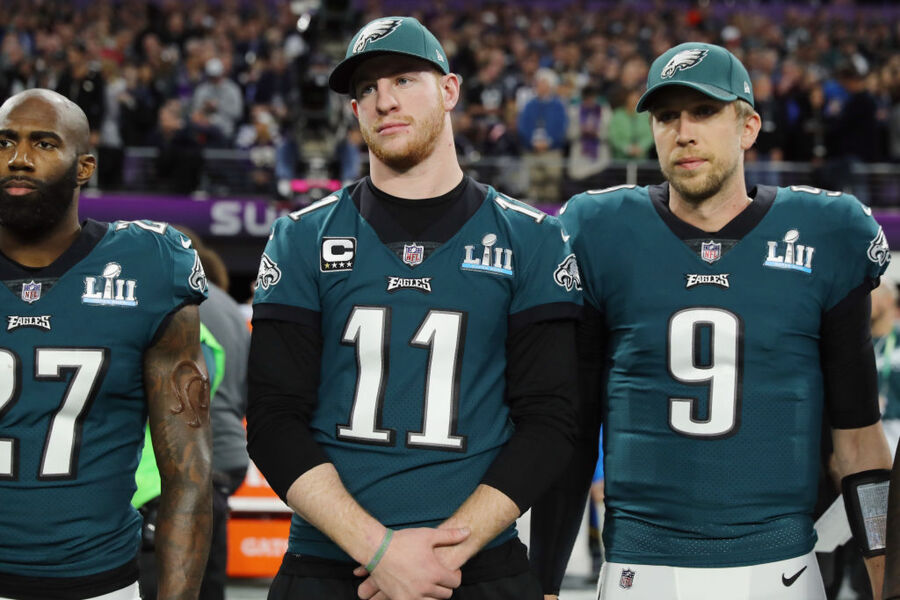 Some of the quarterbacks ahead of Foles and Wentz are established veterans who have offered consistently strong seasons of play. Names like Russell Wilson ($23.8 million), Tom Brady ($22 million), and Aaron Rodgers ($20.5 million) are no surprise.

But there are a few guys earning significantly more than Foles and Wentz who have proven either inconsistent in their careers or helpless during the postseason.

Consider Andrew Luck, whose cap hit will be $24.4 million next year. He didn't even play a single snap this season after a shoulder injury kept him sidelined all year. The Colts haven't provided much information about the mysterious injury, but it was obviously serious enough to keep Luck off the field.

Luck has at least played well when he's healthy, though. Ryan Tannehill has been far less consistent and will be returning from a knee injury when his $19.8 million cap hit takes effect next season. Cincinnati's Andy Dalton will be worth $16.3 million on the Bengals cap.

Perhaps the most embarrassing of all, though, is Chicago's Mike Glennon. The Bears signed Glennon to a three-year, $45 million deal this summer, despite the fact Glennon hadn't started a game since 2014. Glennon didn't play particularly well, throwing for 833 yards with four touchdowns, five interceptions, and five fumbles. The Bears stumbled to a 1-3 record before turning the keys over to rookie Mitchell Trubisky.

Glennon is still on the Bears as a backup. He'll be a $16 million cap hit on the team's payroll next season, unless the team cuts him before June 1. Then all that money will go to this year's cap.

They say football is a game of inches, but sometimes it's about finding bargains where you can. The Eagles have two Super Bowl-quality quarterbacks on their roster, and they're taking up less cap space combined than 19 other quarterbacks. That's pretty impressive.