The biggest story this NFL offseason hasn't been speculation over how big name free agents will fit into their new homes, or whether high draft picks like Jared Goff and Carson Wentz will live up to the hype. There hasn't even been much discussion over whether the Denver Broncos, who lost their top two quarterbacks from a season ago, can repeat as Super Bowl champions.

No, there's another story that's dominated the headlines: San Francisco 49ers quarterback Colin Kaepernick not standing for the Star-Spangled Banner during any of his team's preseason games.

A quick refresher: to protest current racial and police tensions within the country, Kaepernick opted not to stand while the National Anthem was being sung. He did this for two weeks and nobody made a peep about it, but suddenly, by the third week of the preseason, it had become a huge deal. Kaepernick met with a Green Beret (and took a knee, rather than sat, during the final preseason game as a result of that conversation), has pledged to donate $1 million to charities that aid communities in need, and sparked a national conversation over issues currently facing the country.

Kaepernick's busy preseason has also boosted his jersey sales to an absurd level. After sitting at the sixth most popular position all year, he's now the best-selling jersey in the entire NFL. 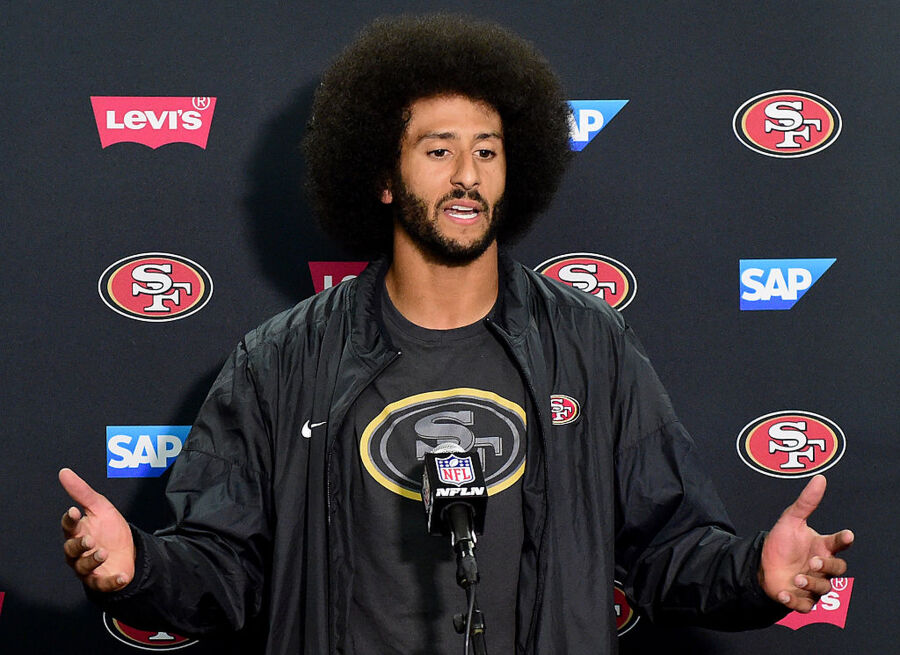 Not only that, the 49ers have sold more Kaepernick gear in the last two weeks alone than they did the previous eight months combined.

The boost in sales helped Kaepernick become the #1 highest-selling jersey in the NFL. Before the controversy, he ranked #120. Kaepernick displaced Dallas Cowboys rookie running back Ezekiel Elliott and New York Giants wide receiver Odell Beckham Jr. from the #1 and #2 spots, respectively.

And in a move that will at least partially silence some of his critics, Kaepernick is planning to donate the proceeds he makes from these jersey sales. Here's the message he posted on Instagram:

"I want to thank everyone who has shown me love an support, it truly means a lot! I wasn't expecting my jersey sales to jump to number one because of this, but it shows the people's belief that we can achieve justice and equality for ALL! The only way I can repay you for the support is to return the favor by donating all the proceeds I receive from my jersey sales back into the communities! I believe in the people, and WE can be the change!"

Kaepernick, who's being paid $11.9 million this year, is currently the backup to Blaine Gabbert. After leading the 49ers to the Super Bowl in 2012 and to the NFC Championship Game in 2013, Kaepernick saw a sharp decline in his production. It culminated in a woeful 2015 season that saw him throw just six touchdowns and five interceptions in eight games, while completing less than 55 percent in four of those games. The Niners went 2-6 over that stretch before naming Gabbert the starter.

Kaepernick has received a lot of criticism for his protest, but he's also seen some support. In addition to meeting with Green Beret Nate Boyer and bringing him to a game, 49ers safety Eric Reid joined Kaepernick in his protest during the team's final preseason outing. At the G2O Summit, President Barack Obama said the quarterback was "exercising his constitutional right to make a statement," adding, "I think there is a long history of athletes doing so."

Despite the criticism, Kaepernick defended his love for the United States. "I'm not anti-American," he said. "I love America. That's why I'm doing this."

We'll see if the protest continues during the regular season. For now, Kaepernick's stand has made his jersey more popular than it has been for quite some time.