By Marvin Jules on November 6, 2016 in Articles › Sports News

It finally happened. After 108 years of heartbreak and suffering, the Chicago Cubs finally won the World Series in seven games. The players who helped the team win its first title in over a century will probably never have to pay for a meal in the city of Chicago for the rest of their lives. With that being said, in the unlikely event that any member of the 2016 Chicago Cubs have to whip out their checkbooks to pay for for a meal, they probably won't have any issue doing so anytime soon.

Ever since the first World Series in 1903, Major League Baseball has had a policy of allowing players who played on post-season teams to receive a share of the revenue generated by post-season ticket sales. MLB's collective bargaining agreement contains the formula of how the money will be divided among post-season players.

While all teams involved in the playoffs get a share of the ticket revenue, the World Series team gets the spoils. According to Fangraphs, the World Series winning team takes home 36% of the funds that go into the "players pool" of playoff revenue. This means that any of the players who were on the Cubs between June 1 and August 31 will take a vote in order to decide how that money will be divided. These funds can go to whoever they choose, whether it be to players who were on the team before June 1 or after August 31, ball boys, or other people who work for the clubhouse.

Exactly how much money will the Cubs have to divide? Well, this post-season's revenue numbers aren't in yet, but if we're going off of last year's post-season revenue number (a record $69.8 million), the Cubs will have roughly $25.1 million to split among themselves. In the 2016 season, 49 different players took the field for the Cubs, which means that each player would receive $512,000 if each player took home a full share. This scenario is unlikely, though, because the Cubs will likely give partial shares to members of the organization who didn't take the field for the team. For example, last year, the Cubs shared the revenue with 60 different people. 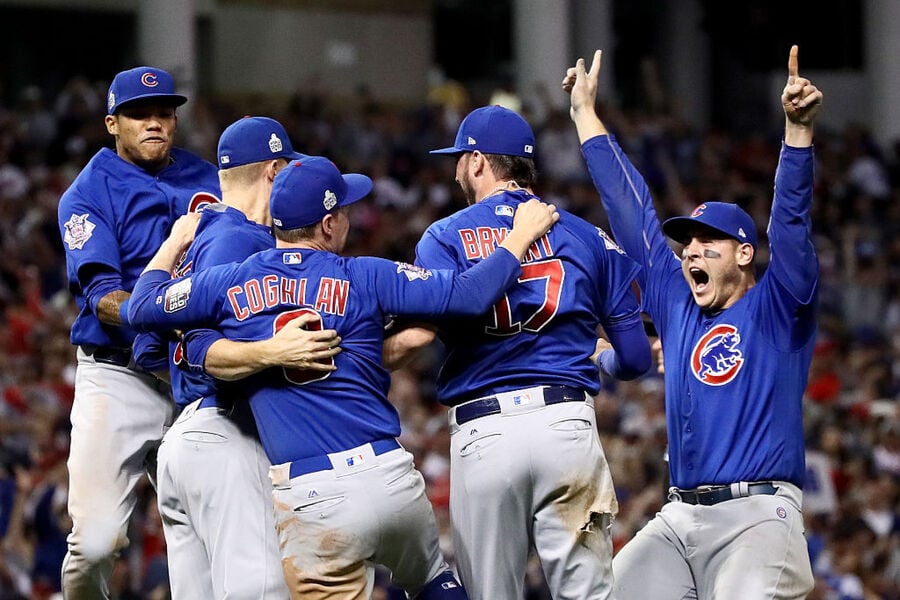 Even if the money each of the players receive is a little less than $512,000, the payday will almost double the salary of some key players on the team. According to sportrac.com, Cubs third baseman Kris Bryant, the likely winner of the NL MVP Award, made just $652,000 this season. Along with shortstop Addison Russell, who made $527,000, heavy hitter Kyle Schwarber made $522,000 and finally, the pitcher who was on the mound for the final out Game 7, Carl Edwards, Jr. makes the league minimum of $507,500!

While the salaries those three players made this season may seem like a lot to some, the money they made this season is chump change to the Cubs player who has the highest average annual salary, Jon Lester. He makes an average of $25,833,333 per year on his 6 year/$155 million contract. So that post-season bonus probably won't mean as much to him as the three aforementioned players.

Congrats to the Cubs for not only winning the World Series, but also earning a significant payday in the process.