Oh, NBA free agency. It's a wild time, when teams will throw big money at players to try to lure an All-Star or two to their roster. And fringe role players will also make absurd salaries, because overpaying is the norm. This year in particular is going to be fascinating, because it comes just before the league's new TV deal kicks in. That'll make the salary cap jump from about $67 million to roughly $89 million; when that happens, salaries that once seemed like they were massive overpays will even out a little bit.

Of course, there are exceptions to the rule. One of them is Carmelo Anthony and the New York Knicks, who have been mired in mediocrity for years. Prior to the 2014-15 season, the Knicks were able to woo Anthony by offering him more money than any other team could. It worked, as the All-Star stayed put in the Big Apple, signing a five-year, $124 million contract.

At the time, the Knicks almost had to do it. Though they missed the playoffs the prior season, they were coming off three straight postseason appearances, and Anthony was playing well as the leader of the team. Unfortunately, as we've seen far too often in the past, a shiny new contract caused more problems than it solved. Thanks to a lingering knee injury, Anthony was shut down by the All-Star Break. He only played in 40 games, and New York went 17-65. 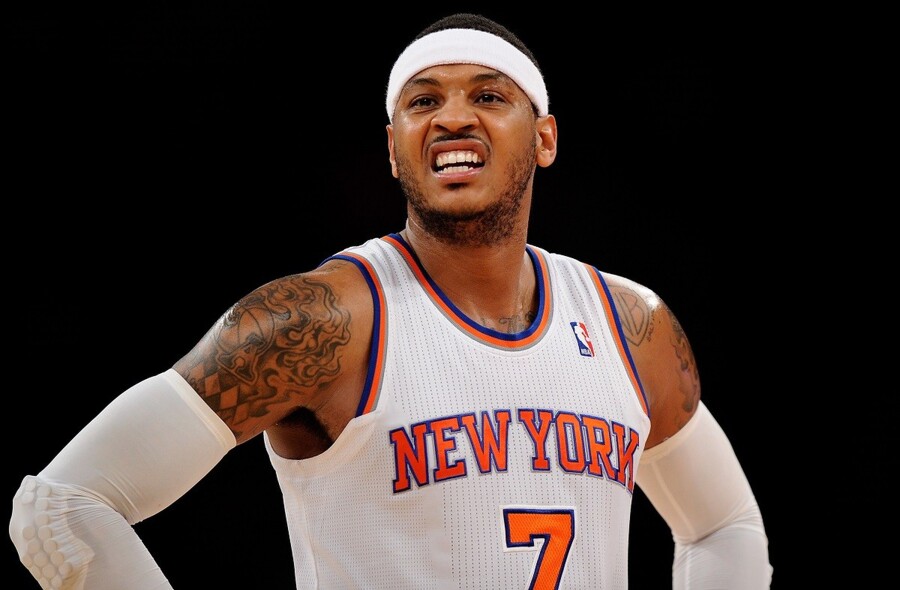 After dumping Iman Shumpert and J.R. Smith to the Cavs during last season, the Knicks appear to simultaneously be trying to reach full-on rebuilding mode while still contending for a championship. That's a problem, particularly when they still have more than $100 million committed to Anthony. And he really doesn't have a solid team around him. With the fourth pick in the 2015 NBA Draft, the Knicks selected Kristaps Porzingis, a guy from Latvia who may end up being the best player from the draft when everything is said and done (though Knicks fans have no idea about that, based on their reaction to the pick), but he's still a few years away from developing. They also acquired former Notre Dame guard Jerian Grant in a trade, who is maybe the best player in the whole draft at curling off screens. Too bad the Knicks' triangle offense that Phil Jackson wants to instill uses very little screening. Grant is probably not going to be a great fit with the team.

Carmelo Anthony is 31 years old with bad knees. He's in win-now mode, and the Knicks really can't get there with his salary the way it is. Part of that is due to the free agents on the market – nobody wants to play with the Knicks. LaMarcus Aldridge, DeAndre Jordan, Kevin Love and Marc Gasol are all players who would fit in well with New York, but none of them have the Knicks anywhere near the top of their wish lists. Love has already re-signed with the Cavs, and Gasol has indicated he'll return to Memphis. Aldridge and Jordan are both likely leaving their respective teams, but it won't be to join New York.

The two most likely free agents for the Knicks to grab are former Pistons big Greg Monroe and former Blazers guard Arron Afflalo. But much like the team's two draft picks, they don't fit with what the Knicks want to do. Monroe is a terrific low-post scorer, but Carmelo Anthony does his best work from the elbow. That'll muddle up the lane, resulting in a lot of unwatchable offense. The Knicks could theoretically try Anthony at power forward and Monroe at center, but that would be an absolutely dreadful defensive combination. Monroe is poor around the rim defensively, and Anthony has traditionally struggled against fours. He has–or had, if his knee injury slows him down at all–the quickness to beat them on offense, but will just get destroyed on the other end.

Meanwhile, Afflalo, who is the only NBA player in recent memory who was ultimately traded for himself – the Nuggets traded Afflalo in a four-team trade to obtain Andre Iguodala, then traded Iguodala for a trade exception, which they later used to re-acquire Afflalo – isn't a bad player, but he's a streaky shooter and his production dipped after being traded to Portland last year. Granted, that's a small sample size, but the Knicks better hope he can return to his Magic form of about 17/4/3 per game.

There are essentially two places you want to be in the NBA – contending for a championship or bottoming out. Right now, half of the Knicks plans seem to be going one way, while the rest is going the other. The result looks like several years of mediocrity, which is basketball purgatory. Oh, and they still have to pay Anthony $100 million, unless they can find another team willing to take on that behemoth contract for a superstar whose best years are very likely behind him.