Carli Lloyd's Popularity Is Skyrocketing – But Will Her Bank Balance Do The Same?

If you do not know the name Carli Lloyd you must be the one person on the planet that does not own a television, computer, or know someone that does. She is only one of the stars of the U.S. Women's National Soccer Team – excuse me, the World Cup Champions.

In a thrilling game, she and the rest of the squad took down the Japanese team 5-2, but for all intents and purposes, the game could have been over after the first 16 minutes of play thanks to Ms. Lloyd. That's how long it took her to record the first hat trick (score three goals); something that had never been done in the history of the Women's World Cup.

As could be expected, her popularity skyrocketed during the game. After making the third goal the number of Twitter followers she had jumped by about 50,000. Roughly a day after the game she had 387,000 followers and counting. She was mentioned in over 120,000 tweets following the game.

As nice as it is to be loved – and she is loved by many according to all the marriage proposals she received on Twitter Sunday night, it is also pretty nice to get paid. Historically, women do not get near the attention that men do in sports and that tends to hold true when it comes to endorsement dollars as well.

So after making history and being watched by the largest television audience to ever take in a soccer game (an estimated 25.9 million, according to FOX via Nielsen) will that hold true for Carli Lloyd? 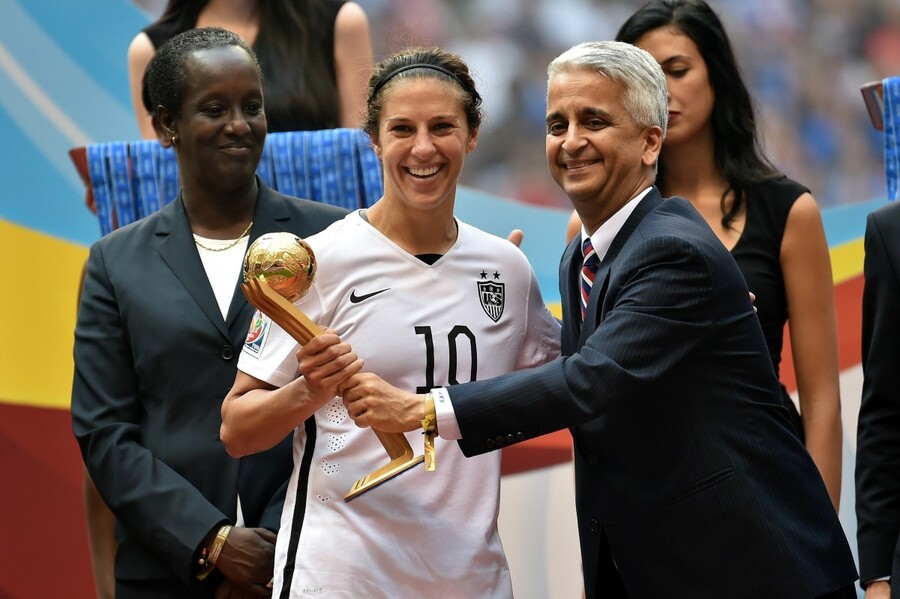 When she goes back to the Houston Dash of the National Women's Soccer League it will, but that is because the fledgling league does not pay anywhere near its male counterpart. League minimum for the NWSL is just $6,842 with a max of $37,800. The salary cap is $265,000.

The salary cap for the men in MLS (Major League Soccer) is $3 million per team with the average salary around $305,000.

Her bank account will see a boost when she gets her cut of the prize money for winning the World Cup. The team will get to split $2 million. Germany took home a team prize of $35 million from the men's World Cup in Brazil.

If she is going to be able to turn her newfound popularity into money, it will come in the form of appearance fees and endorsements. Just in the course of a few games, one booking agent estimated that the cost to book Lloyd went from $10,000 (after the quarterfinal win) to $15,000 (after beating Germany) to $30,000 (after beating Japan).

As with most athletes, the real money is going to be made in endorsements if it is going to be made at all. Armed with the knowledge that over 25 million people watched the World Cup Finals and knowing how much Americans love to support their winners, what company would not want to sign Lloyd?

Since the game ended Lloyd's agent has been slammed with over 200 inquiries from business interests and the media. As far as endorsements go she has already signed on with Visa. The credit card giant was smart and inked her to a deal a week ago so they could cash in on her overnight fame. Word is that negotiations are ongoing with an automobile manufacturer and a watchmaker.

She will need to strike while the proverbial iron is hot of course. As much as Americans love supporting winners they tend to forget about them just as easily. The media requests that she will be fulfilling in the days and weeks to come will help keep that from happening too fast. The Women's National Team is up for an ESPY as well. Lloyd will be attending the ESPY's on July 15.

So will she cash in? It's hard to say. Her value has been estimated to be anywhere from low-mid six figures so she certainly will not do too badly. However, her biggest enemy may be herself. Lloyd wants to be associated with brands that she personally patronizes (nothing wrong with that) – like Whole Foods.

As nice as it would be to encourage people to eat better and shop at Whole Foods, there is no way they would be able to pay her anywhere close to what McDonald's could. Maybe she likes McDonald's and would like to endorse the fast food chain, but it is doubtful an organic food nut would want to do that.