California Chrome could have been the horse the whole world knew. Instead, that honor belongs to the 2015 Triple Crown winner, American Pharaoh. California Chrome was in a position to become the first Triple Crown winner in decades during the 2014 season, having won the Kentucky Derby and Preakness Stakes, but an injury he suffered during the start of the Belmont Stakes kept him from making history.

American Pharaoh went on to win the Triple Crown in 2015.

While he can't be the one to break the Triple Crown drought, that does not mean there isn't history to be made for California Chrome. With a good run at the Dubai World Cup, he had a chance to do that – and he did. Known as the World's Richest Race, the winner of the Dubai World Cup will take home a $6 million purse.

When combined with the $6.53 million he has already earned during his career, a win in Dubai would make him the career money leader for racehorses bred in North America. He had come close to winning it during the 2015 season, but he came in second to Prince Bishop. 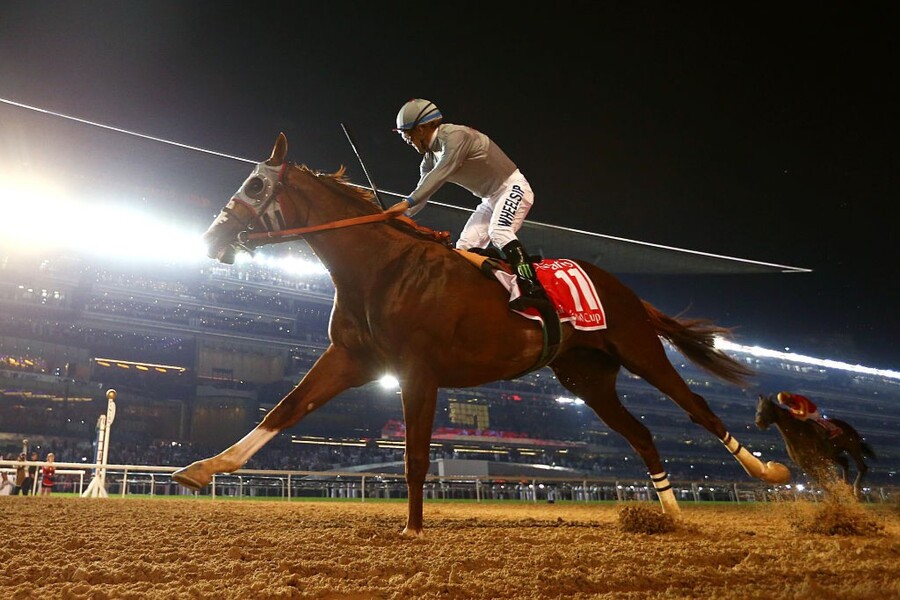 Normally, an accomplished horse at the age of five, as he is, would be hard at work on the stud farm. Horses reach sexual maturity at age four, so by starting at that age, owners can maximize their breeding profits. However, horses have been known to race as long as they are healthy and making their owners money. California Chrome's owners wanted another shot at the big prize in Dubai. After watching their horse win by 3¾ lengths, they were certainly glad they took it.

When the race was over, they found out how close they nearly came to losing again. The saddle was not properly secured and ended up slipping back near his hind end during the race.

"The saddle was slipping back a little further and further," jockey Victor Espinoza said. "So I didn't want to take any chance, so I let [him] go."

With the $6 million purse, his career earnings soared to $12.53 million, putting him at the top of the career money list for racehorses bred in North America. The previous record holder was Curlin, who earned $10.5 million over the course of 16 races, finishing in the top three of 15 times (with 11 first place finishes).

Among the world's top-earning horses, California Chrome sits in third place. The two ahead of him, Deep Impact ($12.5 million) and T.M. Opera O ($16.2 million), were both bred and raced in Japan.

Up next for California Chrome will be some much needed rest. His owners want to get him back on the track when they can, but considering the injury issues he had over the last year, they are not going to rush him. They would like to win one of the qualifying races for the Breeder's Cup Classic, so they don't have to pay the six-figure entry fee to get in.

There is also talk about a possible $12 million race to be held at either Gulfstream or Santa Anita Parks.

No matter how the rest of his season goes, it sounds as though California Chrome will be off to enjoy his second career as a stud on a breeding farm at the end of the year.