Blake Bortles last played in an NFL game in 2019, signing with four different teams since that last appearance. Even though he's only 30 years old, Bortles has decided to hang up his cleats, announcing his retirement on the Pardon My Take podcast. It marks the end of a career that had plenty of ups and downs.

If you're only going by wins and losses, Bortles had a rough career. He finished 24-49 as a starter, in essence losing two out of every three games. Of course, football is a team sport, so it's hard to pin the blame entirely on Bortles. In fact, we'd say his career was pretty successful.

After all, Bortles played in just 78 games over eight years in the NFL, earning $48 million in the process. That's $615,385 per appearance — not too shabby! 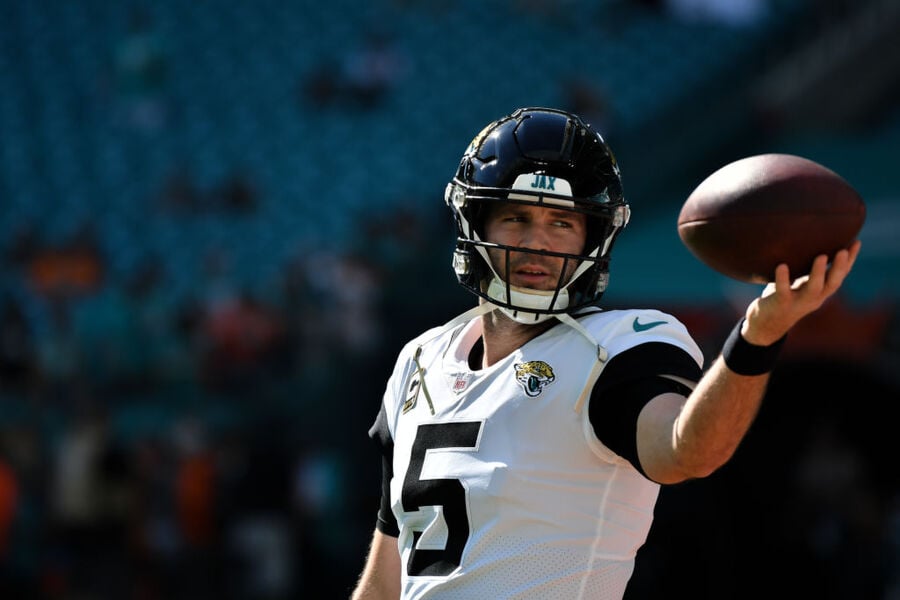 He earned about half that money from his rookie contract. As the third pick in the 2014 NFL Draft, he signed a deal worth $20.6 million guaranteed over four seasons. He struggled during his rookie year, as most young quarterbacks do. But he showed vast improvement in 2015, throwing for a career-high and Jaguars' franchise-high 4,428 yards and 35 touchdowns.

In 2017, the Jaguars improved to 10-6 — Bortles' only winning season — and won the AFC South. Their postseason run went all the way to the AFC Championship Game, including a thrilling 45-42 victory over the Pittsburgh Steelers. The Jaguars were only a few minutes away from the Super Bowl but ultimately lost to Tom Brady and the New England Patriots, 24-20.

After that strong season, the Jaguars rewarded Bortles with a three-year, $54 million contract in 2018. But he didn't get all that money, as he'd only play 13 more games with the team. He had his worst season since his rookie year, and the Jaguars released him in March after signing Nick Foles. In a cruel twist, Foles got hurt in the first quarter of the first game the following season — had Bortles still been on the roster, he likely would have started most of the team's games that year.

Instead, Bortles signed with the Los Angeles Rams to be Jared Goff's backup. He only threw two passes in three appearances during the 2019 season. Then, he spent the 2020 and 2021 seasons bouncing around the Denver Broncos, Rams, Green Bay Packers, and New Orleans Saints, though he never made it onto the field at any of those stops.

For his career, Bortles finished with an 80.6 passer rating, 17,649 passing yards, 1,766 rushing yards, 103 passing touchdowns, 8 rushing TDs, and 75 interceptions. He never had a season with fewer than 11 interceptions, but he was generally solid enough for a pretty terrible team. He's also the Jaguars' franchise leader in several additional stats, including most pass completions in a season and most passing touchdowns in a game.

And in the end, he retires with his health and millions of dollars. That's not a bad deal.