Stephen Curry has had one heck of a year. He led the Golden State Warriors to an NBA-best 67 wins during the regular season, and he has them right on the brink of the NBA Finals. Oh, and he's a two-time gold medalist and also won this year's MVP award while draining ridiculous threes like they were as easy as blinking. He's essentially the real life version of NBA Jam.

But it's taken a lot of hard work for Curry to reach the level he's currently at. How did he go from shooting hoops against a telephone pole to an NBA All-Star worth $14 million?

Wardell Stephen "Steph" Curry was born on March 15, 1988 in Akron, Ohio. He grew up in Charlotte, as his father Dell played for the Charlotte Hornets, and outside of playing basketball, Steph attended a Montessori school started by his mother, Sonya.

After leading his high school team to three conference titles and three state playoff appearances, Curry didn't receive any scholarship offers from major schools. He was only 6'0″, 160 pounds at the time, and while he wanted to play at Virginia Tech like his dad did, the Hokies only offered him a position as a walk-on player. VCU and Winthrop did offer Curry scholarships, but he ultimately chose Davidson, a team that hadn't won an NCAA Tournament game since 1969. Curry was about to change that.

In his first collegiate game, Curry scored 15 points, but also had 13 turnovers. He quickly righted the ship, though, earning Southern Conference Freshman of the Year honors, making the SoCon All-Tournament Team and winning MVP of the tournament. He was also the second-highest scoring freshman in the NCAA, just behind Kevin Durant at Texas. His three-point shooting was in great form, too; he set the freshman record for most three-pointers made during a season with 122. His Wildcats made the NCAA Tournament as a 13-seed with a 29-5 record, but lost to Maryland.

It was his sophomore season in college when Curry would finally become a household name. He had finally grown to his current height of 6'3″, and led Davidson to a 26-6 regular season record, including 20-0 in conference, on 25.5 points, 4.7 rebounds and 2.8 assists per game. The 10th-seeded Wildcats made a habit of big comebacks in the tournament during the first weekend, overcoming an 11-point deficit to beat Gonzaga in the first round, then evaporating a 17-point deficit against the Georgetown Hoyas. Curry combined for 70 points in the two games. He wasn't done, either–in the Sweet 16, Curry dropped 33 points in a 73-56 blowout of Wisconsin, and scored 25 points in a 59-57 loss to #1 seed and eventual champion Kansas. Curry averaged 32 points per game during the tournament, and was named the region's Most Outstanding Player. For the year, he made the AP's All-America Second Team, and set the NCAA record for most made threes in a year, netting 162. 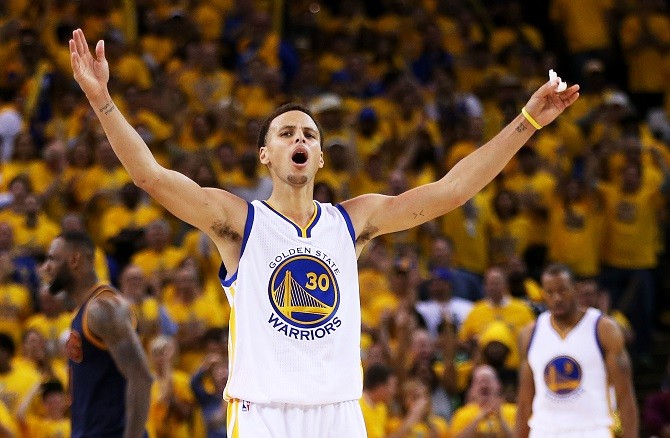 With his NBA stock already sky high, Curry returned for a junior year to hone his point guard skills. He could still score like nobody else, though, leading the NCAA with 28.6 points per game. But he nearly double his assist total from his sophomore year, averaging 5.6 dimes per contest. Despite a gaudy regular season record, Davidson lost in the second round of the SoCon tournament, and the Wildcats missed the NCAA, instead falling in the second round of the NIT to St. Mary's. After the loss, Curry announced he'd enter the NBA Draft.

If ever there was proof that NBA GMs don't really know what they're doing most of the time, here are a few players taken before Stephen Curry in the 2009 NBA Draft: Hasheem Thabeet (2nd pick by the Grizzlies, now in the NBA D-League), Ricky Rubio (5th pick by the Timberwolves, who spent multiple seasons in Europe after being drafted and has only played in 202 of a possible 312 NBA games thanks to injuries), and Jonny Flynn (6th pick, ALSO to the Timberwolves, and who's been out of the NBA since 2012). Okay, maybe that's a better example of then-Timberwolves GM David Kahn not knowing what he's doing, but still. Other top picks that year included Blake Griffin and James Harden, who obviously are terrific players, too. And of course, teams are going to select based on need. Unless, again, you're the Timberwolves, who ended up selecting three point guards in the first round (granted, they did end up trading one of them), and none of them were named Steph Curry.

Luckily for Curry, the Warriors snatched him up with the seventh pick, and he became part of a massive rebuilding effort by the team. He signed a four-year, $12.7 million contract, and immediately began the season in the starting lineup. During his rookie season, Curry recorded his first career triple double, finished second in Rookie of the Year voting behind Tyreke Evans, and averaged 17.5 points, 5.9 assists, 4.5 rebounds and 1.9 steals. The following season, he set a Warriors franchise record for free throw percentage, knocking down 93.4% of all freebies. He also won the 2011 Skills Challenge at the All-Star Game, and won the 2010-11 Sportsmanship Award. But Curry also had multiple ankle injuries during the season, and in May 2011 he underwent surgery to repair torn ligaments in his ankle. His foot never got fully healthy during the year, and he only played in 26 out of a potential 66 games during the lockout-shortened season, averaging career-lows in just about every statistical category.

But Curry wasn't down for long; after signing a four-year, $44 million extension during the 2012-13 season, he set career highs in scoring and assist averages, with 22.9 and 6.9 per game, respectively. He also recorded his career-high of 54 points in a game at Madison Square Garden, and set an NBA record by making 272 3-pointers in one season. Curry, along with most of his teammates, got their first taste of the postseason by earning the 6th seed in the West with a 47-35 record. They took out the Denver Nuggets in six games, before giving the Western Conference champion Spurs a tough time in a six-game series loss. The following season, Curry again set personal bests, with 28 points and 8.5 assists per game. Despite winning four more games, the Warriors once again found themselves as the 6th seed, this time playing the Clippers. But unlike the previous year, Golden State lost in the first round, going out in an entertaining seven-game series. Curry was named an All-Star for the first time, and made the All-NBA Second Team for the second time. 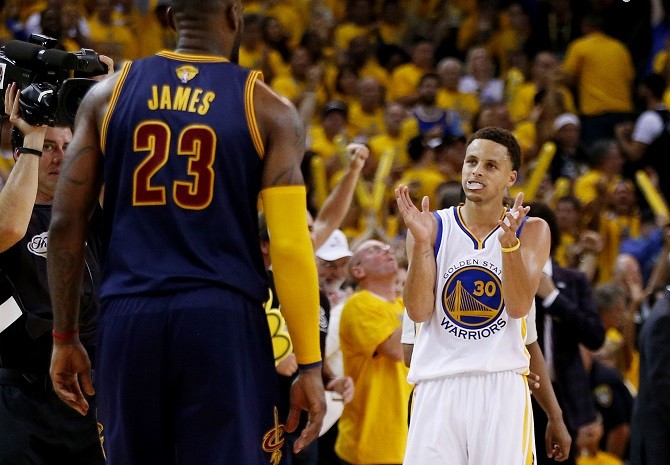 The 2014-15 season saw everything come together for the Warriors. Led by rookie head coach Steve Kerr, Curry, along with other key players like Klay Thompson, Andre Iguodala, Draymond Green, and Harrison Barnes, tore through the regular season, losing just two games at home en route to a 67-15 regular season record. During the year, Curry made his 1,000th career three-pointer after only 369 games. That's the fastest anyone in the NBA has ever reached the milestone. He finally won the three-point contest at NBA All-Star Weekend, and was the leading vote getter for the All-Star game itself. Curry once again set the record for most three-point field goals made in the regular season, reaching 286 this year. He had an encore for the playoffs, too: he became the fastest player to reach 100 made threes in the playoffs, doing so in just 28 games. Later in the postseason, he set the record for most threes made in the playoffs, with 88 and counting. Not bad for a supposed underdog player.

And that underdog status caused Nike to pass on signing Curry as an endorser. Curry was already a Nike athlete, but Under Armour offered $5.5 million to grab the point guard. Nike didn't want to match that amount, and so the underdog shoe company got its underdog poster child. Seems like a pretty good bargain after all Curry has accomplished in the NBA. Now we'll see if he can add "NBA Champion" to his resume.