Andrew Luck Has One Thing Most Other Free Agents Don't Have, And He'll Get Rich Because Of It

Colts owner Jim Irsay has never been one to shy away from big, often controversial statements. Just a few days ago, he compared the long-term dangers of playing football to taking aspirin, and earlier this year, he said his team was planning to give a "shocking amount" of money to Andrew Luck, the team's franchise quarterback.

Even without making that statement, it's clear that Luck is going to get a big payday. And no, it's not because he has a radical owner. He has something else most of the other current free agents don't – leverage.

Luck has been grossly underpaid during his pro football career, but that's about to change. In 2015, he made $3.4 in base salary, which was a bit more than a $7 million cap hit on the team. As a first-round pick, he was eligible for a fifth-year option on his contract, an option that the Colts picked up.

Now, here's where Luck is finally going to get big money, at least for a year. By virtue of being a top ten pick (Luck was taken #1 overall in the 2012 draft), he gets a fifth-year salary commensurate with the transition tender for his position of quarterback. Had he been taken after the 10th pick, that salary then becomes the average figure of the quarterbacks ranging between third and 25th. This is true of any position – for example, a wide receiver taken 14th overall would earn a fifth-year salary that's an average of what the third highest-paid receiver through the 25th highest-paid receiver make.

In Luck's case, being a top pick makes a world of difference. His fifth-year tender will be $16.2 million; had he been drafted later in the first round, that tender would only be $10.6 million.

Despite being underpaid relative to his performance, Luck's already made $22 million in salary and signing bonuses over his career, and he stands to make that $16.2 million next year. If the Colts were to try and lowball him, he could look at his relatively hefty sum of money he's banked and turn the offer down.

That fifth-year option certainly helps with Luck's leverage, too. Players taken after the first round don't have that additional year, so a guy like Russell Wilson made just under $3 million in four years. He had more incentive to take the Seahawks' offer, which ended up being for $87 million over four years. Similarly, Brock Osweiler, who has only started seven games in his career, had a four-year, $3.5 million deal while in Denver. When the Texans came calling with $72 million for four years, he was more inclined to take it than someone in Luck's position would be.

To get an idea of how much Luck could make, let's look at the #1 overall pick from the year before he was drafted: Cam Newton. The Panthers signed Newton to an extension before this past season, a move that now looks genius in retrospect.

Newton's rookie contract had a fifth-year option for $14.7 million. He signed his new extension for five years and $103.8 million. That includes a $22.5 million signing bonus, $60 million guaranteed, and $61.7 million over the first three years, more than any other quarterback who recently signed their second contracts. Even players who have been average or subpar in their NFL careers are making pretty good money; Sam Bradford, for instance, has a two-year deal for $35 million, despite not being able to stay on the field or put up consistently good numbers.

The power of leverage is real, and Luck can point to other quarterbacks who haven't put up the kind of stats that he has, yet they're still getting paid well. He can even look at more veteran quarterbacks, including Joe Flacco and Philip Rivers. Flacco restructured his deal and will now make more than $120 million over six years. Rivers will make $83 million over four years, despite turning 37 by the end of that deal. Luck is more than a decade younger, and you could argue his receiving weapons are better than what Rivers has, and certainly better than what Newton had to play with in 2015.

The biggest problem facing the Colts, though, is that outside of a few solid receivers in T.Y. Hilton and Dwayne Allen, and a few other promising ones in Donte Moncrief and Phillip Dorsett, the team is badly lacking on both the offensive and defensive ends. Indy's GM Ryan Grigson has whiffed on most of his draft picks–including Dorsett, who was taken in the first round last year. He could still turn into a viable receiver, but the Colts had so many other needs that it was a bit baffling as to why they grabbed him. 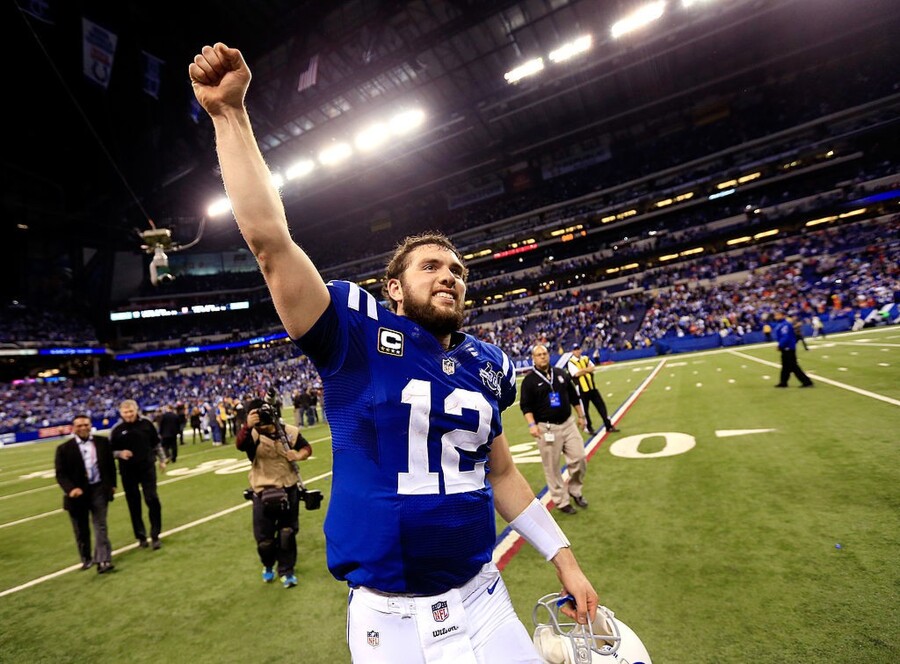 What's also alarming for Indianapolis is that Luck has been hit more than any other quarterback since he entered the league. A patchwork offensive line and zero running game to speak of – remember, this is a team that gave up a first-round pick for Trent Richardson, a back that the Colts waived after two lackluster seasons – don't help Luck much, either. He had been great at soldiering through injuries, but finally missed time last year with a lacerated spleen.

That leaves the Colts in an interesting predicament. They still have $23 million in cap space this off-season, and they've remained spectators during free agency thus far. If they sign Luck to a deal over the next couple of months, great; if not, it's curious as to why they didn't spend some of that money on free agent help to give Luck some relief.

Of course, perhaps Indianapolis is simply haunted by the ghosts of free agents past. Offseason signings like Frank Gore, Andre Johnson, Ricky-Jean Francois, Arthur Jones  and Trent Cole didn't pan out, and those names aren't the only ones to disappoint when Luck was still at a bargain price.

The Colts aren't going to give up on Luck, but he can certainly get them to cough up a few extra million dollars. If he refuses to sign an extension and the team is forced to franchise tag him over the next couple of years, he'd make $71.1 million from 2016 through 2018. That's still enough money to wait it out and see if the Colts do a better job of surrounding him with talent, and more importantly, protect his health.

Or he could use the leverage he has to ask for more money in his second contract. He can look at the other quarterbacks around the league making big bucks, showcase his solid track record (albeit in the weakest division in football) and remind them of his penchant for taking hit after hit. The team can consider the additional salary an insurance policy to make sure their franchise quarterback sticks around.

However much he ends up with, Luck is going to get paid, and paid well. It's up to the Colts to complement his shiny new contract with the pieces that are going to help the team return to the Super Bowl.