The boxing world has been buzzing over a possible Floyd Mayweather return to the ring and a $100+ million payday, but come Saturday, the buzz will be about someone else – either Amir Khan or Canelo Alvarez.

It will be the first time Khan headlines a fight card in the United States, and the first title defense for Alvarez since he won the WBC, The Ring, and lineal middleweight title belts against Miguel Cotto in November. The winner will end up being the de facto face of boxing (until Floyd Mayweather or Manny Pacquiao returns).

Many were surprised when the fight was announced in February. While it involved two of the most exciting fighters in the sport, Khan would have to move up a couple of weight classes to make it happen. After chasing big money fights for the last few years – if that is what was necessary for him to book one, finally – he was willing to do it.

Is Khan's speed enough to beat Alvarez's power? Fans will find out Saturday night. Whatever the outcome is, one thing is for certain: Khan is going to have the biggest payday of his career. Early reports claimed he would get a guaranteed purse of $6 million and no cut of the pay-per-view money. That's more than he made for his last five fights, combined ($5.9 million). 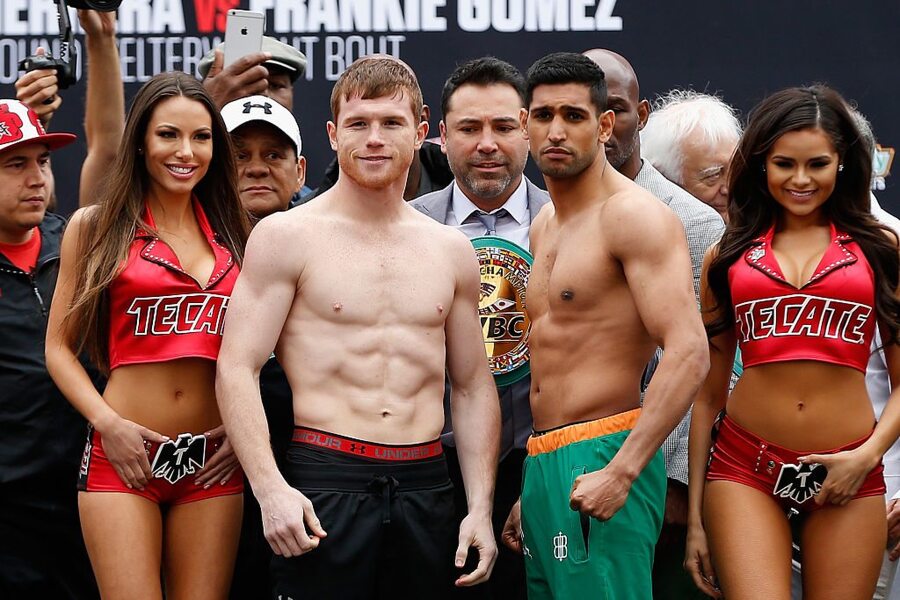 However, in the days leading up to the fight, several news outlets have reported that Amir is going to make a lot more on the night, with some estimates going as high as $13 million. The additional $7 million is expected to come from various promotional activities and a cut of the UK television money from BoxNation.

Should his take end up being closer to $13 million, it will be the largest payday for a British fighter, since David Haye made $14.6 million when he fought Wladimir Klitschko in Hamburg in 2010.

If you ask Khan, the payday is not that important. He'll have time to make more money later. "I've never gone into a fight just to make money," said Khan. "I'm going to have another four or five fights and still make a lot of money, but I'm really doing this for legacy, I'm doing this because I really believe I can make history."

That's easy to say when you have a net worth of $30 million.

Alvarez's net worth sits at $18 million, but his paycheck for the fight is going to be a bit higher. He will get a guaranteed purse of $10 million, along with a share of the pay-per-view ($2-3 for every PPV sold, as long as the total clears 500,000). Conservative estimates have him taking home $12-15 million. However, one media outlet reported he could take home upwards of $35 million, when it's all said and done. Not bad!