American Pharoah's second career has officially begun, and it will be quite a bit different from his first. As a race horse, it was his job to cover whatever the distance was on the track faster than anyone else. Lucky for him and his owners, he ended up being quite good at it. In the process, he made those owners a pretty penny and made himself a horse in demand as soon as his breeding career began – which it certainly has.

He recently took the 30-step walk, the shortest walk of all the stallions at the farm, to the breeding shed for the first time to "meet" with a young mare by the name of Untouched Talent. American Pharoah has been at the Ashford Stud farm in Kentucky since November, getting comfortable with his new home.

By time the five month breeding season is done, he will have made the walk 175 times. 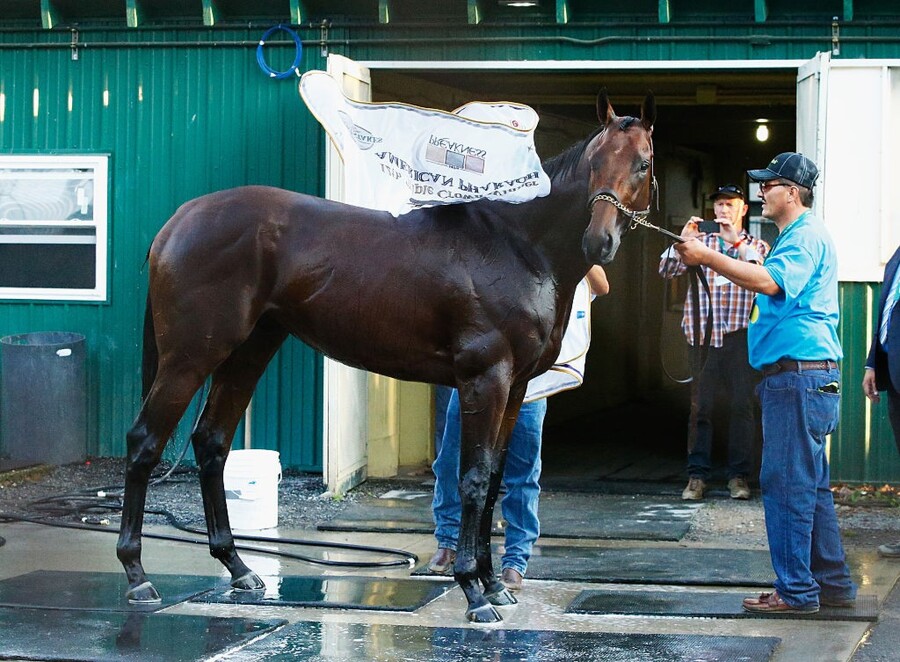 It's alright guys. You can be a little envious. It is not a bad way to make a living at all, and there certainly are worse ways to live after you retire.

As the first Triple Crown winner in 38 years, his owners were able to command the highest fee ever for an unproven stud, at $200,000 (paid after the mare gives birth). However, he will not be the most expensive stud on the market. That honor goes to 15-year-old Tapit, at $300,000.

Tapit's racing career was not nearly as successful as American Pharoah's, but he has had something else work in his favor. Many of his progeny have gone on to do quite well at the track. The more successful they are, the higher a stud fee he can command.

Should American Pharoah's progeny perform well, his fee could reach $300,000 or more, in no time, but there is no guarantee that he will be successful. Cigar, the highest earning thoroughbred in racing history, wasted little time mounting 34 mares, but not a single one ended up getting pregnant, because he was sterile.

There is always that risk, which makes the $13.8 million Ashford Stud paid for breeding rights look like an expensive gamble, but the company likely has likely taken out insurance on the possibility.

Assuming he makes $200,00 a pop for each of the 175 trips to the breeding shed this season, American Pharoah stands to make his owners a cool $35 million this year. During his racing career, he only made $8.6 million. At approximately 35 mares a month, he will surpass his racing earnings in a little under five weeks.

However, Zayat Stables, American Pharoah's owner, still owns partial breeding rights to American Pharoah and will be sending at least 12 mares to the shed. Ashford Stud has privately offered 2 for 1 deals, so his earnings will not quite reach $35 million (but they are still going to do pretty well).