For the majority of his career, Antonio Brown has been a very productive wide receiver. While a member of the Pittsburgh Steelers, Brown amassed seven seasons with at least 1,000 yards and recorded six straight seasons with 100 or more catches. He also made seven Pro Bowls and was named first team All-Pro four times.

But Brown's production on the field didn't come without some drama off of it. And it's ultimately cost him millions of dollars.

First, let's take a look at the money Brown has made.

Brown produced his most successful seasons while on that deal. From 2013-18, his season averages were 114 catches, 1,524 yards, and 11 touchdowns. That would be impressive enough as a single campaign. Brown achieved those numbers six years in a row as the Steelers perennially reached the playoffs.

In 2017, the Steelers gave Brown a four-year, $68 million extension. However, Brown only played two more seasons in Pittsburgh, so he only made about half of that money.

We'll go more into Brown's additional stops below, but he was traded to the Oakland Raiders for a third- and fifth-round draft pick in 2019. Over the next year and a half, he only played in one game out of a possible 24 regular-season contests.

Despite a ton of previous drama, the Tampa Bay Buccaneers signed Brown to a contract for the second half of the 2020 season. The deal was worth $2.5 million, which would be earned largely via incentives. Brown's base salary was a mere $750,000.

Brown made it through that 2020 season without incident, winning a championship with the rest of the team while scoring two touchdowns in the Super Bowl. The Bucs brought him back for the 2021 season on a one-year deal worth up to $6.25 million.

Brown's career earnings including the 2021 season come to…

Now, for the money he's missed out on. 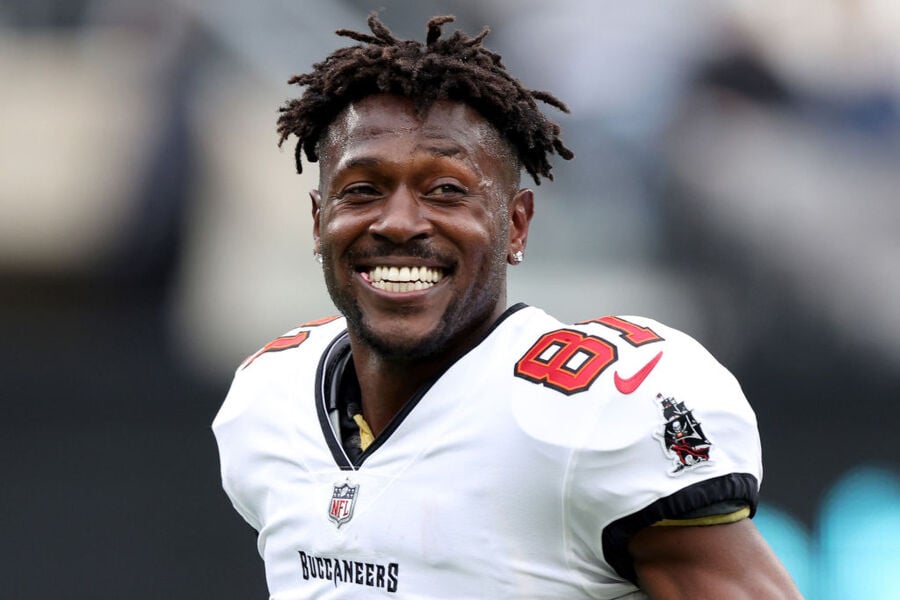 The 2019 season was particularly brutal for Brown. On December 30, 2018, he was benched during the Steelers' Week 17 win after fighting with quarterback Ben Roethlisberger—Brown reportedly threw a football at the quarterback. Two and a half months later, the Steelers traded Brown to the Oakland Raiders, who signed him to a three-year, $50 million deal. But Brown's time in Oakland was short-lived.

During the summer, Brown used a cryotherapy machine without the proper footwear. As a result, he experienced foot issues from the extreme cold. He also left a practice early when he couldn't wear his helmet of choice. He reportedly threatened to retire, filed grievances, and spray-painted his old helmet.

A month later, he missed additional practice and training camp. The team fined him and it led to a confrontation with Raiders GM Mike Mayock. Brown followed that confrontation up with an Instagram post asking to be released, and the Raiders obliged. Because of the whole situation with the team and Mayock, Brown's contract was voided—he earned none of the $30 million in guaranteed money.

Brown then joined the New England Patriots on a one-year, $15 million contract (with a $9 million signing bonus), grabbing four catches for 56 yards and a touchdown in his debut. But after two sexual assault allegations arose against Brown, the Patriots released him.

For a while, it looked like Brown would only earn a single game check of $158,333. However, the receiver and team eventually came to an agreement and Brown received $5 million.

On July 30, 2020, the NFL suspended Brown for eight games—half of a season—from a January arrest. Brown initially was charged with felony assault and battery of a moving company truck driver; the charges ultimately handed down included burglary of a vehicle, misdemeanor battery, and misdemeanor criminal mischief.

Despite that, the Tampa Bay Buccaneers signed Brown to a contract for the rest of the 2020 season. Bucs coach Bruce Arians told reporters at the time: "He screws up one time, he's gone."

On December 2, 2021, Brown's personal chef accused the receiver of providing a fake vaccination card to the league. The NFL investigated and suspended him for three games for lying about his vaccination status.

Most recently, Brown left the Buccaneers' game against the New York Jets, removing his jersey before tossing his shirt and gloves into the crowd. Brown later said the team forced him to play while injured, but the fact remains he's no longer on the team. With his season coming to a premature end, Brown ended up eight catches, 55 receiving yards, and one touchdown short of three separate performance bonuses worth $333,333 apiece.

Per Spotrac, Brown has also forfeited $577,460 in fines due to a number of transgressions. Some were from the NFL for various touchdown celebrations, taunts, and cleating, but Brown's teams have fined him, too. The Steelers fined him for unsportsmanlike conduct and an equipment violation, and the Raiders fined him for the confrontation with Mayock and for not participating in an August walkthrough practice. The Bucs also fined him as part of the vaccination ruse.

Of course, Brown has ultimately recouped some of that money through other contracts and signing bonuses. Still, the amount he's watched slip away over these past few years truly is staggering.

Leaving Tampa Bay's game early may have been the final straw for his career. Brown will be 34 by the time the next season starts, and his production has been inconsistent since leaving Pittsburgh. Will another team give him a chance in the 2022 season?

If not, Brown may look back wistfully on what could have been.