It seems like all we hear about in sports nowadays are the scandals. And it's understandable; after all, the juicy gossip and hard issues drive the ratings. Whether it's PEDs and steroids in baseball, domestic and child abuse in the NFL, overpaid basketballers going bankrupt, or anything else, negativity rules.

But it's not all bad! There are plenty of athletes out there doing great things for their community. Here are some of the stories you may have missed during the year because they're just too happy.

Randy Moss was certainly one of the more polarizing wide receivers in NFL history. Remember when he pretended to moon the Packers' fans at Lambeau Field after scoring a touchdown? Or when he did an interview from his car that popularized the phrase "straight cash homie?" It certainly was easy to think he was just another overpaid, diva receiver (though he did put up incredible numbers during his career).

But a friendship Moss formed when he was a rookie in Minnesota back in 1998 has lasted to this day. Kassi Spier battled leukemia as a child, and Moss quickly grew close with her. She would follow him to lunch during training camp, and Moss refused to do a 2000 interview without her on his knee. In 2004, Spier's father was killed in a car crash. Moss has always been good with children, bringing them to Vikings games on buses, but Spier was extra strong, and he became like a father figure to her after her dad's passing. This year, Spier graduated from high school, and Moss surprised her by attending the graduation and hanging out with her classmates. He aimed to stay out of the limelight so that Spier and her friends could enjoy their special moment.

Sticking in Minnesota, Charles Johnson may very well be the second coming of Randy Moss. Okay, that's a bit of hyperbole, but he's a tall, fast receiver who started playing well for the Vikings at the end of last year. Back in April, he showed off his speed again, this time in attending a ten-year-old girl's birthday party.

Mackenzie Moretter of Shakobee suffers from Sotos Syndrome, a rare genetic disorder that causes gigantism. As a result, she's much bigger than the rest of her classmates. And because kids can be cruel with things they don't understand, all of the guests for Moretter's tenth birthday party had declined to attend. Her parents took to Facebook to issue a cry for help, and Johnson answered. He attended with his family, firefighters let guests tour their fire truck, retailers donated food for over 250 people, and Shakobee mayor Brad Takbe proclaimed the date "Mackenzie Moretter Day." Now that sounds like one amazing party.

#5: Russell Westbrook Wins A Car At The All-Star Game, Gives It Away

Whether you love or hate his reckless style of play, you have to admit that Russell Westbrook is quite entertaining to watch on the basketball court. All-Star MVP voters thought so, too, as Westbrook nearly broke the game's record for most points scored. He didn't quite reach the record, though, and had to settle for an MVP award and new car.

Of course, Westbrook doesn't need a car (he can probably run faster than one, anyway). So he teamed up with Sunbeam Family Services in Oklahoma City and donated his Kia to Kerstin Gonzalez, a 19-year old single mother of two. Naturally, as most of us would do in that situation, Gonzalez cried tears of joy at Westbrook's selfless act. Hey, we always knew he was good at slam dunks. 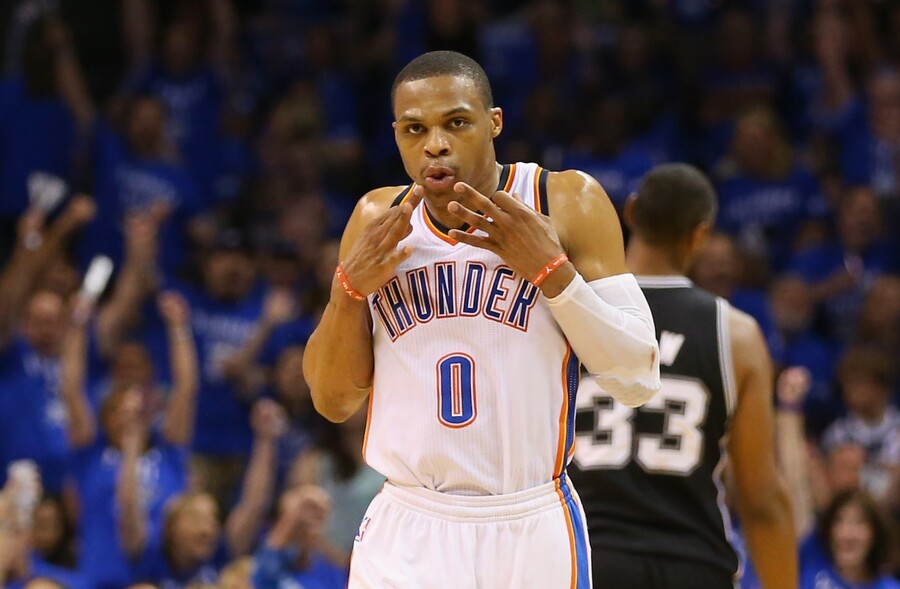 #4: Dwayne Bowe Flies Back To Kansas City To Say Goodbye To One Of His Biggest Fans

Back when he was with the Chiefs, Dwayne Bowe made a habit of kissing Betty Johnson at every home game. Johnson, a fan from Independence, MO, made the trek out to the stadium each Sunday; she was a season-ticket holder for nearly 30 years. Bowe was released by the Chiefs and signed by the Browns earlier this year, but when Johnson died at age 86, Bowe returned to Kansas City for her funeral.

Bowe spoke at the funeral service and sent a flower wreath that had some pretty touching words on it: "You might have thought [you] were the Chiefs' No. 1 fan, but in so many ways, we were yours. Thanks for making Arrowhead feel like home to me. I will continue to play my heart out for you. Kisses to you my special angel."

#3: Zach Randolph Pays For Families To Have Heat During The Winter

Zach Randolph knows a thing or two about gritty post play, and it turns out he also knows how to be charitable. For the sixth straight year, he's partnered with the Metropolitan Interfaith Association (MIFA) to help Memphis residents battle the dangerously cold temperatures that hit the city this past winter.

Z-Bo donated $20,000 to go directly to MIFA's "Plus-1" program, which pays utility services for people in need. Randolph's contribution helped more than 100 homes maintain heat, electricity and other utilities during the winter.

Five years ago, Tampa Bay Buccaneers DE William Gholston was a high school senior in Detroit. He ran out of gas and came across a BP station, but didn't have any cash with him. Attendant Mohamed Gabasha gave Gholston a ride back to his car, and dropped him off with a can of gas.

Flash forward to this year: Gholston is now a professional athlete, but he hasn't forgotten the good deed Gabasha did for him. Gholston returned to that same gas station and paid the attendant $100, accounting for interest of the loan. Gabasha is a Lions fan, though he enjoyed watching the Bucs Super Bowl team back in 2002. Our best guess is that he'll support the team once again.

#1: Baltimore Orioles Help Out Their Workers During The City's Civil Unrest

This last one is a team effort. During the civil unrest in Baltimore at the end of April and beginning of May, the Orioles had to postpone two games against the Chicago White Sox, and played a third with no fans. On top of that, they moved three other home games against the Rays to Tampa Bay. This caused at most a minor inconvenience for the fans and players, but it was potentially very costly for the staff workers. Most ballpark employees are paid by the hour, and if they don't come to work, they don't make any money.

Baltimore and owner Peter Angelos did the right thing, though, and still paid the workers for the week of April 27, when the games were missed. Since several of those employees live paycheck to paycheck, it may have actually been a life-saving gesture.