50 Incredible Facts From the 2015 NFL Season

Another NFL season has come and gone, and once again, there was no shortage of chaos throughout the year. We had a legitimate shot at an undefeated team, but that fell just short. We saw injuries to major skill players on just about every team, and we saw some very bad football complement some solid individual efforts. Presented for your curiosity, enjoyment and amazement, here are 50 incredible facts from the 2015 NFL season.

1. Cam Newton became the first player in NFL history to throw for at least 30 touchdowns and run for eight or more scores.

2. The Colts haven't had a running back rush for 100 yards in 50 straight games. The last time it happened was in 2012, when Vick Ballard ran for 105 yards against the Houston Texans.

3. The Vikings are the only team to start the same five guys on their offensive line the entire year.

4. Julio Jones now has two 100-reception seasons in his career, tied with Roddy White for the most in Falcons history.

6. But he doesn't hold a candle to Matt Schaub, who, dating back to last season, threw six pick sixes in a nine-game stretch.

7. Matt Cassel got called for intentional grounding on a pass that was intercepted in Week 15. That may have never happened before in the history of football.

8. The Bills defense had 21 sacks this year, the fewest in a 16-game season in team history. They had 54 a season ago.

9. Adrian Peterson is only the third player to lead the league in rushing after turning 30 years old.

11. While we're on the topic of Jacksonville, the Jaguars both scored 51 points and gave up 51 points in a game this season.

12. Against the Dolphins in Week 12, Ryan Fitzpatrick became the first Jets quarterback since Chad Pennington in 2002 with four scores and zero interceptions.

13. During Week 13 of the NFL season, the Packers were shut out at halftime for the first time in 56 games. You might remember that game as the one where they beat the Lions on a Hail Mary. 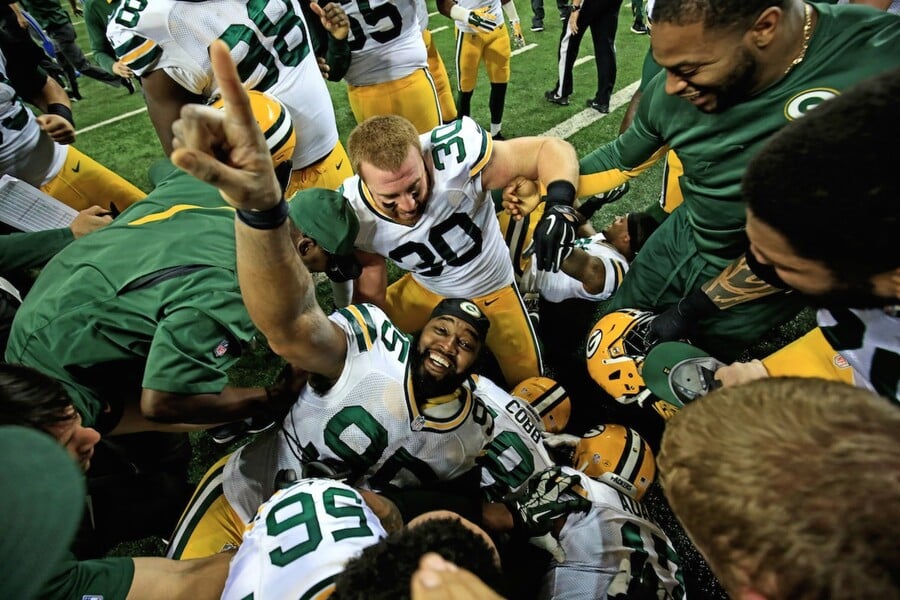 15. Kirk Cousins is the first Redskins QB to throw TD pass in all 16 games since the league went to 16 game schedule in 1978.

18. Prior to this season, Tim Hightower hadn't recorded a carry since October 23, 2011. So it makes perfect sense that he finished with four touchdowns in his final four games.

19. The Lions beat the Saints in Week 15 for their first road win on Monday Night Football since 1994.

20. Kansas City is the first team in NFL history to have a five-game losing streak immediately followed by a ten-game winning streak.

22. His teammate Tavon Austin is the first player since Gale Sayers in 1965 to score at least four rushing touchdowns, five receiving touchdowns and one punt return touchdown in the same season.

23. Antonio Brown is the first player in NFL history to have two consecutive seasons with at least 125 catches. 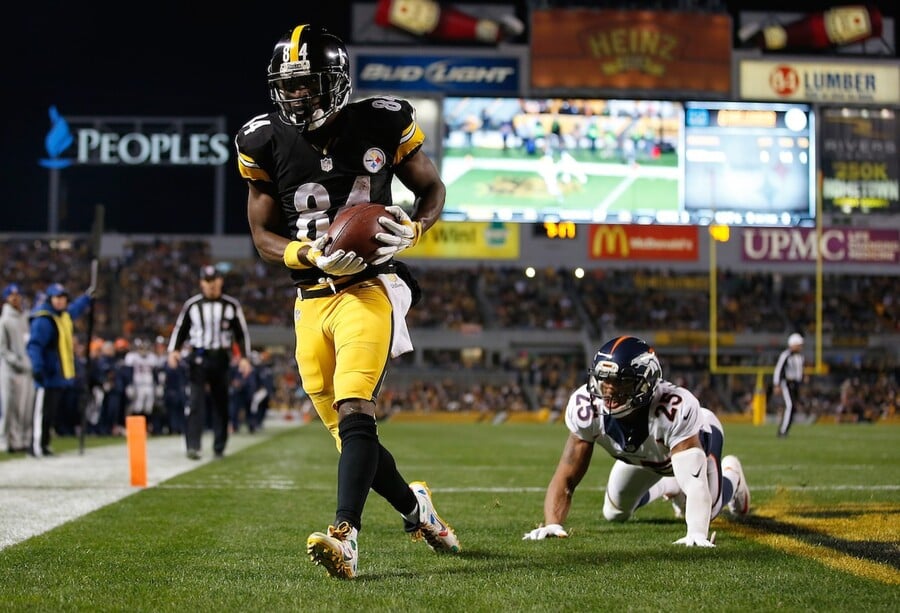 24. This is fifth straight season we've seen a comeback of at least 24 points; the Redskins beat the Buccaneers in Week 7 after trailing 24-0. There was almost a second 24-point comeback that week, too–the Bills scored 28 straight after finding themselves down 27-3 to the Jaguars, but couldn't close the deal. The big comeback streak is the longest in NFL history.

25. The Patriots and Steelers each had six straight games with 30 or more points.

26. All Blake Bortles wants next year is an offensive line. The Jags' QB led the league in both times sacked (51) and interceptions thrown (18).

27. It's not all bad for Jacksonville, though. Allen Robinson was tied with Brandon Marshall and Doug Baldwin for the lead in receiving touchdowns. They all had 14.

28. Robinson and Marshall each had seven scores in their final six games. Baldwin had ELEVEN.

29. Robinson also led the league with 31 catches of 20 or more yards, and had the longest reception this season, a 90-yarder.

30. Marcus Mariota had the longest rush of the season, an 87-yard touchdown. He's a quarterback.

31. The longest non-QB rush belongs to Lamar Miller, who ran 85 yards. The Dolphins missed the extra point on his touchdown.

32. The Houston Texans are in the playoffs despite playing games where they were losing 41-0 to those same Dolphins and 42-0 to the Falcons, two teams that did not make the postseason.

33. Only one player (Peterson) carried the ball more than 300 times this year. In 2010, seven players did so. None of them were Peterson.

34. Thomas Rawls led all players with an average of 5.6 yards per carry.

35. Tampa Bay had two of the top four running backs in terms of yards per carry, with Doug Martin and Charles Sims each averaging 4.9.

36. Devonta Freeman tied for the league lead with 11 rushing touchdowns, though nine of them came in Weeks 2-6.

38. Hill also had five 100-yard rushing performances in the final nine games of last season. He had zero games of 100 or more rushing yards this year.

39. Finally, Adrian Peterson found the end zone 11 times. His scores were more spread out, but he tied for the league lead in rushing touchdowns, so we'll give him a shout out.

41. The Arizona Cardinals scored more points in their first seven games (241) than the San Francisco 49ers did all season (238). 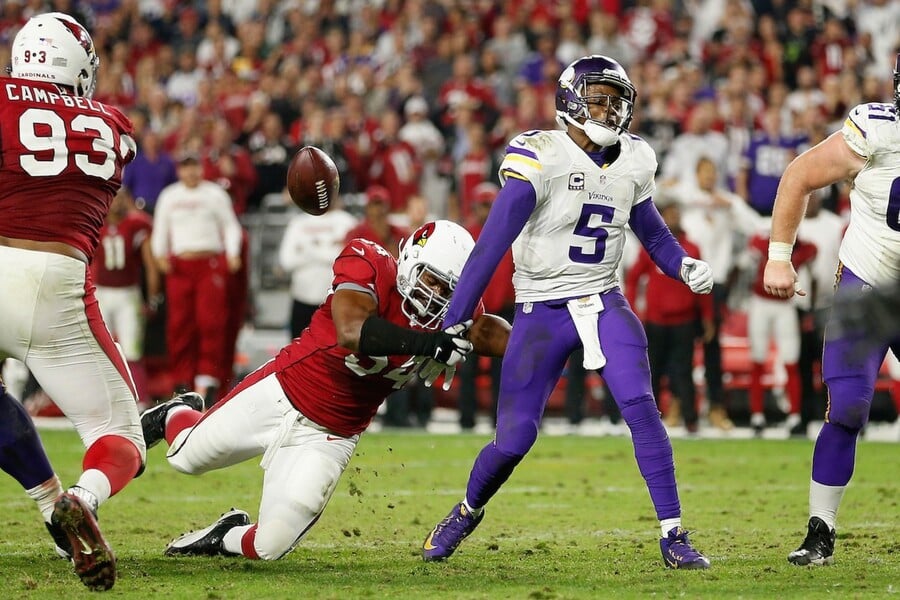 42. Week 3 is often cited as the most important week in the preseason, as most teams will actually play their projected starters for longer periods of time. This year's playoff teams went 9-3 in the preseason–and one of those wins was the Patriots beating the Panthers by one point–so perhaps there's some merit to that.

45. 12 of the last 13 Monday Night Football games were decided by one possession.

46. You may have heard the NFL moved back the extra point from the two-yard line to the 15. Six teams combined to miss eight extra points last season. This year? Only five teams DIDN'T miss an extra point, with 71 missed kicks total among the other 27.

48. Detroit's Matt Prater owns the NFL record for longest field goal with a 64-yarder in Denver. In Week 17, he kicked a 59-yard field goal, the longest in Lions' history. Perhaps most impressively, he did that in the frigid air of Chicago.

49. Drew Brees reached the 60,000 yard mark this season. He's a pretty good quarterback. But not nearly as good as whichever quarterback the Saints were playing.