February 11, 1989 was a day that shook the world. For those who are too young to remember, the world as we knew it was very different after that fateful day. No, a war wasn't started. A peace treaty wasn't signed. In fact, the Berlin Wall was still standing and would continue to stand for 10 more months. So what happened on February 11, 1989? The world found out the the unbeatable was beatable. That was the day a nobody named James "Buster" Douglas defeated the undisputed, unbeatable, unpunchable Mike Tyson.

Prior to February 11, Mike Tyson was widely considered the best boxer of all time. Certainly the best in the world at the moment. He had a track record of eviscerating his opponents in a matter of seconds. None of this Floyd Mayweather dancing around for 12 rounds without getting punched or punching. The bell would ring, Mike would spring from his corner and destroy his opponents with brutal force.

Mike started to run out of opponents because he would just mow through anyone put in his path. As fate would have it, the boxing Gods decided that Mike would face off against an unknown named James "Buster" Douglas. It was a set up match to pave the way for Mike to face Evander Holyfield. Essentially an easy win that would keep fans satisfied and allow Mike to continue devouring the boxing world.

The fight was set for February 11, 1989 in Tokyo where local promoters paid Mike $6 million just to show up.

Douglas' defeat was such a forgone conclusion that only ONE casino in Vegas even allowed people to place bets on the fight. That casino was The Mirage. The odds they offered? 42 to 1.

Fans and bookies weren't the only ones who assumed the fight was an easy win, or even a set up. Mike himself thought this was just a little blip on his continued path of world dominance. After all, he was the reigning undisputed heavyweight champion of the world. He entered the fight with a record of 37 – 0 with 33 knockouts.

Unfortunately, Mike's complacency went to his head. Instead of spending months training and preparing, he basically just vegged out.

His lack of preparedness was on full display when Mike showed up to the weigh-ins with essentially a beer belly. Douglas on the other hand hit the gym and showed up in the best shape of his life.

During the actual fight, Mike looked tired and out of shape (because he was), whereas Douglas looked better than ever. He was aggressive, fast and did not tire easily. In the 9th round, Douglas did something to Tyson that no one had ever done before, he forced the champ to the ground.

It was in the 10th round that the world changed. That's when, to every human being's absolute shock, James "Buster" Douglas not only defeated Mike Tyson, he KNOCKED HIM OUT.

It's hard to overstate how big of a deal this was at the time. I was only 7 years old but I knew something insane had happened. Mike Tyson was larger than life. He couldn't lose to some nobody. But he did. 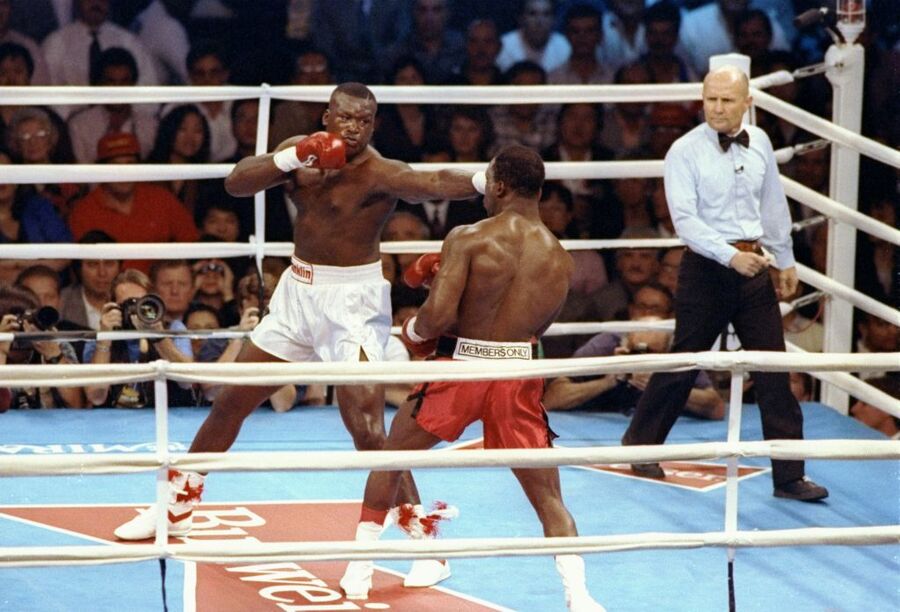 How Much Did Buster Douglas Make Beating Mike Tyson?

Mike earned the $6 million to show up and Buster Douglas earned $1.3 million. With bonuses and PPV money, Buster's total cut was $3 million. That's roughly $6 million today after adjusting for inflation. An incredible amount of money at the time, especially for a guy who had never earned more than $200,000 from a single fight previously. But this wasn't the fight that would put Buster on easy street for life. Douglas' next opponent would be Evander Holyfield – Tyson's intended next target. Douglas earned $24.1 million, the largest boxing purse in history up to that point, when he faced off against Holyfield. That's the same as around $44 million in today's dollars.

Holyfield, who earned $8 million, defeated an overweight and out-of-shape Buster in the third of twelve rounds.

But Douglas didn't seem to mind one bit. He fought a few more times in much smaller venues. His final match was in February 1999.

All told, Buster earned the equivalent of $50 million between those two fights alone. Perhaps more importantly, he changed the world forever.