Kanye West and Taylor Swift have been inextricably linked since that fateful night at the MTV Video Music Awards in 2009. Ever since Kanye got up on stage during Swift's acceptance speech for the Best Female Video, telling the audience that "Beyonce had one of the best videos of all time," it's tough to mention one name without the other. Ye apologized to her shortly after the incident, and apologized several times after the incident. It appeared that the two had buried the hatchet when Swift presented Ye with the Video Vanguard Award at the 2015 VMAs. There, Swift jokingly said, "I'm really happy for you and imma let you finish but Kanye has had one of the greatest careers of all time," as Kanye was about to deliver his speech. Swift essentially confirmed that the two were friends in a GQ interview this past November. But it appears that now, the pair are yet again enemies, and a lawsuit may be involved this time around.

It all started when Kanye premiered the song "Famous" at a listening party for his latest album The Life of Pablo at Madison Square Garden this past February. That song contained a line that had everyone raising their eyebrows. "I feel like me and Taylor might still have sex / Why? I made that b***h famous," said Kanye in the song. Almost immediately, Swift's camp went on the offensive. Swift's brother posted an Instagram video of him throwing away a pair of Yeezy Boosts, while many other tweeted in support of the 26-year-old star.

Kanye's camp, along with Kanye himself, claimed that he asked Swift for her permission to use that line in the song in a phone conversation, and she gave the 39-year-old rapper her blessing. Taylor's camp vehemently denied the claims, which turned the controversy into a classic "he said, she said," situation. That remained the case up until this past Sunday night. 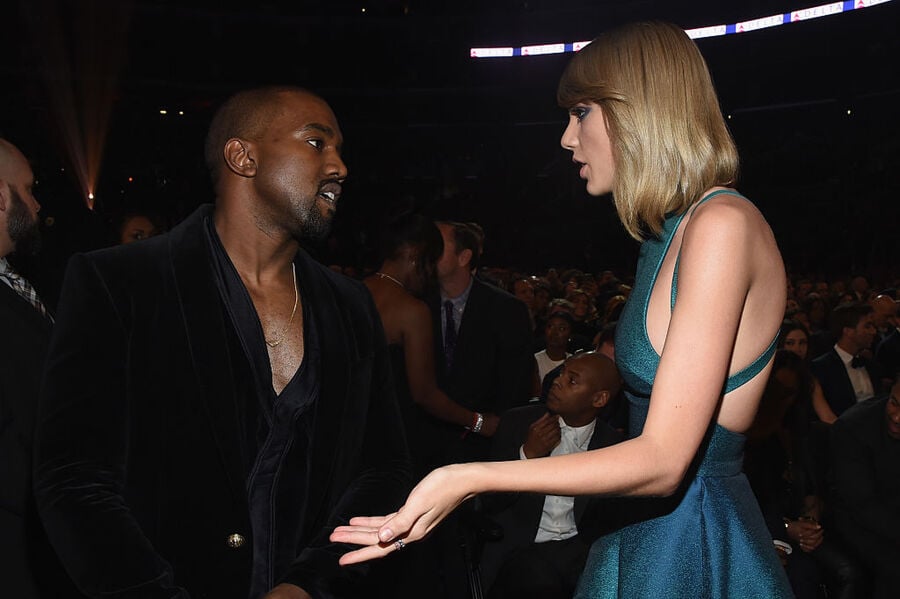 This past Sunday, West's wife, Kim Kardashian West, posted video footage of the alleged phone call between her husband and Taylor Swift discussing the lyrics of "Famous." In the video, West reads her one of the lines in question, "To all my southside n—-s that know me best, I feel like me and Taylor might still have sex." Taylor responded, "I'm like this close to overexposure," but later said that she viewed the line as "a compliment, kind of." Kanye then said, "All I give a f–k about is you as a person and as a friend, I want things that make you feel good," to which Taylor responded, "That's sweet."

Swift went on to say in the video, "And you know, if people ask me about it I think it would be great for me to be like, 'Look, he called me and told me the line before it came out. Jokes on you guys, We're fine.' You guys want to call this a feud; you want to call this throwing shade but right after the song comes out I'm going to be on a Grammys red carpet and they're going to ask me about it and I'll be like, 'He called me.' It's awesome that you're so outspoken about this and be like, 'Yeah, she does. It made her famous.' Its more provocative to say 'might still have sex…' It's doesn't matter to me. There's not like one [line] that hurts my feelings and one that doesn't."

To nobody's surprise, the social media universe went nuts after the video was released. Swift took to Instagram to respond to those labeling Swift as a liar and a manipulator, stating that Ye didn't tell her that he was going to call her a "b****h" in the song, and that Kanye never actually played "Famous" for her, though Swift said Kanye "promised" he would. Swift also mentioned that the call was "secretly" recorded. Which brings us to the potential lawsuit.

Swift and her team are reportedly mulling pressing charges on Kanye and his wife for illegally recording their telephone conversation. According to multiple sources, Kanye made the call from Los Angeles, and did not tell Swift that the phone call was being recorded. If this proves to be true, Ye and Kim may have been in violation of California's "two party consent law," which states that a telephone conversation can only be legally recorded if all parties involved in the call agree to the call being recorded. Violation of the law is a felony, with the punishment being up to $2500 per violation and up to a year in prison. Civil damages may also be levied upon violators of the law.

This story is only getting more intriguing as more details come to light. We'll be sure to keep you updated as new information surfaces.