How "Smells Like Teen Spirit" Became A Hit Thanks To Sarcasm

This year marks the 25th anniversary of the release of Nirvana's "Smells Like Teen Spirit." It's one of the songs – if not the song – that helped propel grunge and alternative rock into the mainstream. It's been called an "anthem for apathetic kids," one of the greatest songs of all time by Rolling Stone, and Nevermind, the album it appears on, is often cited as the flagship album for alternative rock.

Perhaps the most remarkable achievement of "Smells Like Teen Spirit" is that the song was written entirely from sarcasm, all the way down to its title.

Cobain didn't begin writing the song until just a few weeks before the band went into the studio to record Nevermind. And he had one goal in mind: to sound like the Pixies, an alt-rock band he greatly admired. Cobain admitted in an interview a few years' after the song's release:

I was trying to write the ultimate pop song. I was basically trying to rip off the Pixies. I have to admit it. When I heard the Pixies for the first time, I connected with that band so heavily that I should have been in that band—or at least a Pixies cover band. We used their sense of dynamics, being soft and quiet and then loud and hard.

Cobain only had the main riff and the chorus vocal melody written when he presented the song to his bandmates, bassist Krist Novoselic and drummer Dave Grohl. Novoselic immediately dismissed the tune as "ridiculous." In response, Cobain made the band play the riff for an hour and a half. Eventually, Novoselic suggested they slow things down a bit, Grohl came up with a drum beat, and soon they had the backbone of the song. 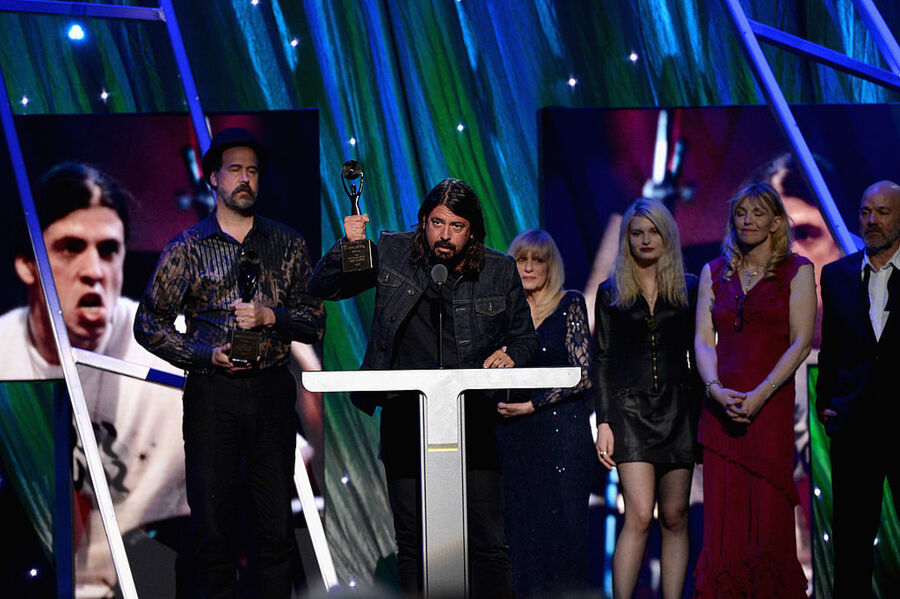 As for that riff they played for so long, Cobain called it clichéd, "like a Boston riff or 'Louie, Louie.'" In fact, during live concerts, sometimes the band would start playing Boston's "More Than a Feeling" before transitioning into "Smells Like Teen Spirit."

The lyric "Here we are now, entertain us" is something Cobain would say at parties to break the ice. He felt when he'd be standing around with several other people, it was boring and uncomfortable. So he thought it made sense for the person hosting to provide some entertainment since they invited everyone there.

Though the song was starting to come together, there was still the matter of the title. Cobain came home one day to find his friend Kathleen Hanna – at the time the lead singer of the riot grrrl band Bikini Kill – had written "Kurt Smells Like Teen Spirit" on his wall. As the pair had been chatting about anarchism and punk rock, Cobain thought it sounded cool, like a revolution and chose it as the title for his new song.

Hanna wasn't being revolutionary, though. She was simply commenting that Cobain smelled like the deodorant Teen Spirit, which his then-girlfriend Tobi Vail wore. Cobain didn't know it was a brand of deodorant until months after the song was all over the radio.

The massive popularity of the song had its effect on the band. Cobain said he could barely get through it live and didn't have a good time playing it: "I literally want to throw my guitar down and walk away."

Nonetheless, even 25 years later, "Smells Like Teen Spirit" continues to entertain us. Not bad for a song about deodorant.