Seven Musicians That Went Above And Beyond For Their Fans

It's safe to say that musicians have passionate fans. You can get into a heated argument with a friend simply by critiquing their favorite artist. It's kind of silly, isn't it? We get all worked up over someone who likely doesn't even know we exist.

In some cases, though, the musicians do know their fans – and do some awesome things for them. Here's a look at seven times an artist went above and beyond to make a magical experience for their biggest supporters.

If you're a student and live in Chicago, you have a very good chance of seeing the benefit of Chance the Rapper's loyalty to his hometown. The rapper has donated more than $2 million to the city for a variety of good causes.

In 2017, he pledged $1 million to the Chicago Public School Foundation to boost arts and enrichment programming. And last year, he pledged $1 million more to mental health services throughout the city. Through his "My State of Mind" initiative, he's providing grants to mental wellness providers. He's also offering 20 additional Chicago schools $100,000 to further support principals, teachers, and students.

Melody Driscoll was born with Rhett syndrome, which causes problems in brain function than can impact cognitive, motor, and emotional skills. As a result, Melody spent most of her young life in the hospital. She was a big Ed Sheeran fan, and his music helped her keep an upbeat attitude. However, because of her condition, she would never be able to attend one of his concerts.

When Sheeran heard Melody's story, he brought the show to her.

Sheeran put on a private, 1-on-1 concert, just for Melody. She got to choose what songs he played and see all the lights and sounds as if she was at a concert, but she was the only member in the audience. Sheeran put all of his attention on her, and she couldn't have been happier. He set up another date with her the following year, too, making yet another magical evening.

Melody died last year when she was just 11 years old, and Sheeran paid tribute to her at her funeral. He's done similar private concerts across the globe, too, putting smiles on the faces of fans that would otherwise never get to experience a concert from their favorite artist.

Beyonce has perhaps some of the most passionate fans of any artist. The Beyhive will go to great lengths to support her, so it's no surprise that Queen Bey is happy to return the favor.

Taylon, who suffered from terminally ill cancer, was one of those fans. She wanted to dance with Beyonce, and at a show in Las Vegas, Taylon got her wish – and then some.

Beyonce swooped down to where Taylon was sitting and helped her sing along to a song. Then she serenaded her young fan with the Destiny's Child hit, "Survivor."

Musicians have been receiving fan mail since the dawn of time – or at least since 1967, because that's when David Bowie replied to a 14-year-old fan named Sandra Dodd. Sandra just so happened to be Bowie's first American fan. The rocker hadn't yet even visited the United States yet, but Sandra's dad, who worked at a radio station, procured a copy of his debut album and gave it to Sandra.

The letter, which was composed on a typewriter, consists of a full five paragraphs, including a great sense of humor and awareness about typos, like the line below. Bowie is gracious, humble, and shares fun facts with Sandra. If she's like any other teenager ever, she probably rubbed this personal note in all of her friends' faces.

I was so pleased that I had to sit down and type an immediate reply, even though Ken is shouting at me to get on with a script he badly needs. That can wiat (wi-at? That's a new English word which means wait). 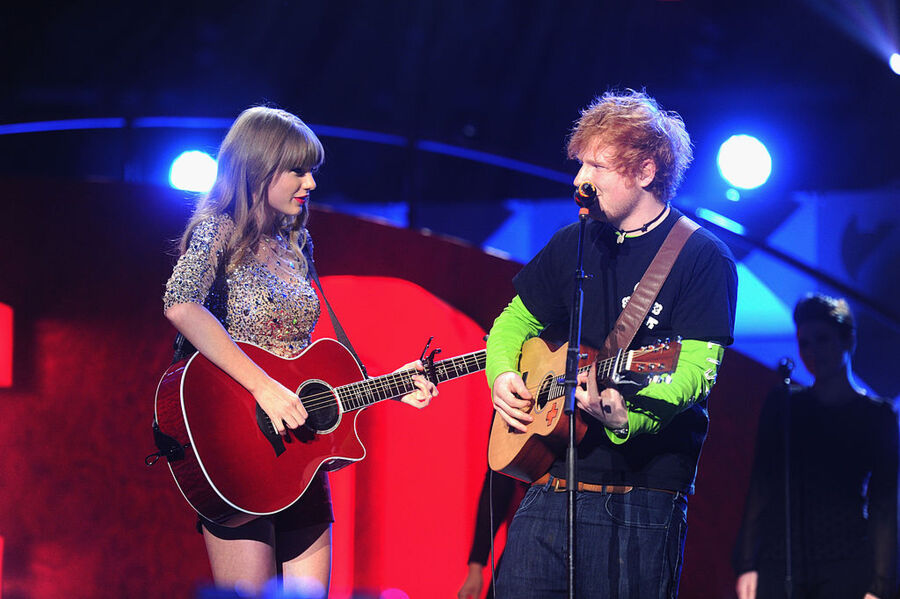 Brant Webb and Todd Russell were working on a mine in Australia when it suddenly collapsed. They were trapped underground, essentially buried alive under the rubble. Eventually, rescue workers were able to locate them and slowly begin the process of digging them out.

The rescue workers lowered food, water, and an iPod to the two men. Webb requested that the iPod be loaded with Foo Fighters music since he was a huge fan of the band.

Word of the request made its way to Foo Fighters lead singer Dave Grohl. He sent the men a motivational message and also offered to buy them a beer when the band toured Australia. And since this is Dave Grohl we're talking about, he got good and drunk with Webb.

Grohl also wrote the song "The Ballad Of The Beaconsfield Miners" in honor of the two men. Getting drinks and having a song to memorialize you is pretty cool, but we'd still rather not fall into a mine.

In 2014, Taylor Swift was on top of the pop world. Her album 1989 was released to massive commercial success, spawning hits like "Shake It Off" and "Blank Space," ultimately selling more than 10 million copies worldwide.

As a result, she had a lot of fans. And she wanted to help make their Christmas celebrations extra special, so she started the season of Swiftmas.

Swift researched some of her fans on social media, sending them boxes of personalized gifts and handwritten letters. The fans were understandably excited, and some of their reactions were chronicled in the video below. It's unclear whether Swift wrote "You Need to Calm Down" five years later as a response.

The movie Blinded by the Light looks at how the music of Bruce Springsteen helped a young man overcome prejudice in his country and follow his passion for writing. But it's not the only time Springsteen has helped someone out.

Scott Glovsky is a huge Springsteen fan, too. He's seen The Boss more than a hundred times in concert, and wanted to share the experience with his son, Xabi. The only problem was that the show was on a school night, and Xabi was just nine years old at the time.

Luckily, Scott and Xabi hatched a smart plan. They wrote a sign that said, "Bruce, I will be late to school tomorrow. Please sign my note. :)"

Springsteen spotted the sign during the show and invited the Glovskys backstage. He pulled out a pen and paper and wrote a thoughtful note to get Xabi out of school – check it out below:

Bruce Springsteen signed Xabi's tardy note for school tomorrow. He is as genuine and gracious as you think he is!

Posted by Law Offices of Scott Glovsky on Wednesday, March 16, 2016

The note came in handy, too. According to Scott, Xabi woke up the following morning at 10:45 a.m. He had missed his alarm but had "the biggest smile on his face," which makes a tardy day more than worthwhile.