Rick Ross and the legal system haven't been on the best terms for the past few weeks. Just a couple weeks after being arrested for marijuana possession in Fayette County, Georgia, Ross was arrested once again late last month for allegedly pistol whipping and kidnapping one of his home's groundskeepers. Ross allegedly broke the man's jaw. The victim will remain on a liquid diet for the time being. Ross was recently released on $2 million bond, but exactly how much trouble is the 39-year-old rapper in? Let's take a closer look at the situation.

First of all, the incident involving Ross, whose real name is William Leonard Roberts, occurred at the rapper's palatial mansion on June 7. This mansion also happens to be the former home of Evander Holyfield. It's an absolutely insane 109-room mansion that was foreclosed on by a bank after Evander loaded up $12 million worth of unpaid debt guaranteed against the property. Ross purchased the house from the bank for $5.8 million in February 2014.

According to the report, Ross and his bodyguard, Nadrian Lateef James, forced the groundskeeper into a guesthouse bedroom at gunpoint and beat him with a .9-mm Glock. The man, whose identity remains unknown at the moment, was taken to a hospital and remains on a liquid diet because of his broken jaw from the incident. Ross also allegedly told the groundskeeper that he would "pop a cap" in him if he talked to police.

Ross was arrested at his residence on the morning of June 24, and charged with kidnapping, aggravated assault, and aggravated battery, all stemming from the June 7 incident. The assault charge is for the pistol whipping, while the kidnapping charge stems from the fact that the groundskeeper was allegedly not allowed to leave the house during the incident. 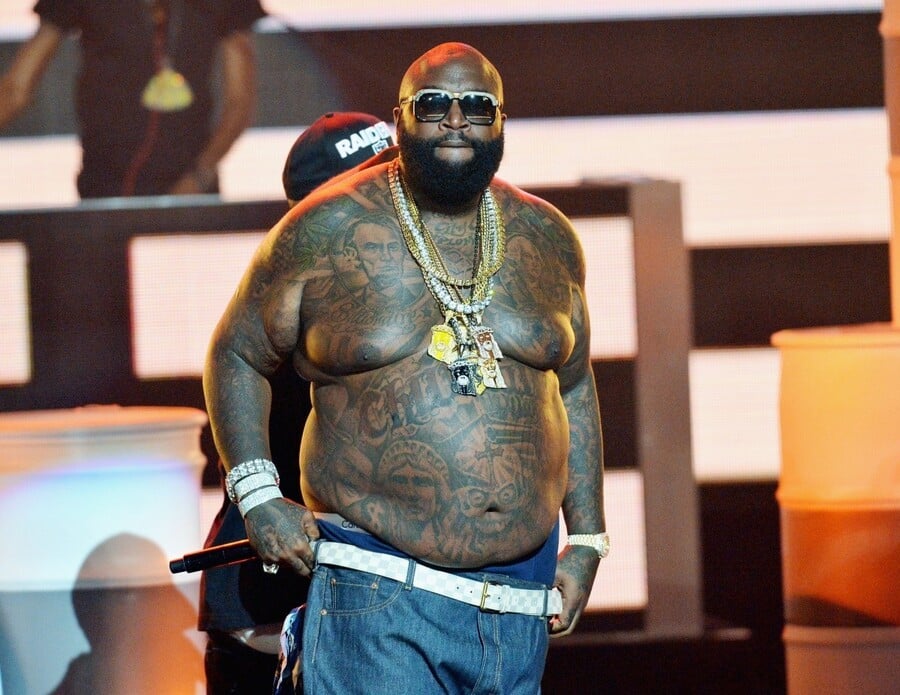 Ross spent a week in jail before ponying up the $2 million bond to get himself out of prison. The judge granted Ross his release after Ross was able to get the cash from a variety of places including:

$1 million equity from the ex-Holyfield mansion he owns, and another GA property

Ross's attorney also told the judge that if Ross threatened or intimidated any witness, that Ross would give his house to the county. Ross was ordered to wear a device that monitors his whereabouts 24 hours a day.

Fast-forward to Monday morning, it seems that Ross cannot keep his name out of the news for the wrong reasons. Yesterday morning, a shooting occurred at Twelve Studios, a recording studio complex located in northwest Atlanta that is connected to Rick Ross. The shooting occurred at 4 a.m. in the parking lot of the studio, damaging three vehicles in the process. Ross is not believed to be involved in the shooting, with there being no indication that he was at the studio at the time of the incident. A statement released by the studio stated that the shooting does not involve any of its staff members or clients, including Ross.