Birdman And Young Thug May Be Trying To Murder Lil Wayne. This Probably Isn't Going To End Well…

It's no secret that Cash Money CEO Birdman and Lil Wayne don't really like each other right now. Their feud has been going on for a while, the details of which you can read right here. Weezy plans on suing Baby for roughly $50 million in a lawsuit, and the two sides have been far from amicable during their feud. Just this past weekend, Birdman reportedly threw a drink at Lil Wayne while the Hollygrove-bred rapper was performing at a Miami nightclub. The very public battle between the two New Orleans natives has been ugly to say the least. But if recent allegations against Birdman and Young Money rapper Young Thug are true, this story will take on a much more sinister tone.

According to an indictment filed in a Georgia court, Birdman and his protege Young Thug (who are both Blood gang members) attempted to have Lil Wayne killed in a Blood gang assassination back in April. Birman and Young Thug are not facing charges for the shooting, but the case alleges the Young Thug's tour manager Jimmy "PeeWee Roscoe" Winfrey, the alleged shooter, was attempting to take out Weezy on Baby and Thugger's behalf.

The shooting took place at 3:30 a.m. on April 26 after Wayne and other Young Money artists were leaving an Atlanta nightclub in tour buses. The buses were hit with multiple gunshots, but no one was injured in the shooting.

The week before the shooting, Young Thug dropped a mixtape called Tha Barter VI, (an obvious reference to Weezy's Tha Carter albums), in what seemed to be an effort to antagonize Wayne and to show that Young Thug has taken Wayne's spot as the golden child of the Cash Money label. Birdman and Young Thug were originally planning on calling the album The Carter VI, but had to change the name for legal reasons, opting to follow the Blood gang tradition of replacing the letter "C" (for Crip) to the letter "B." 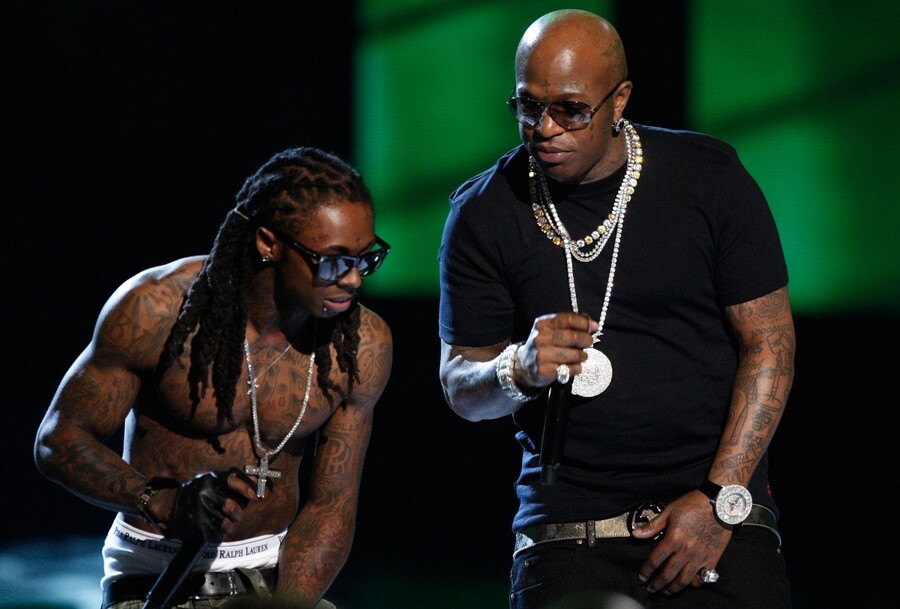 In addition, Thugger posted a video on Instagram earlier in the month in which he stated that the first concert he would be performing for the mixtape would be in Lil Wayne's neighborhood of Hollygrove, New Orleans. In the same video, some of Thug's friends can be seen holding guns, including the aforementioned PeeWee Roscoe.

The indictment states: "Jimmy Winfrey and weapons are visible on that video." It also says that the callout in the video- "meet me there, beat me there, nigga. With them dicks, too," was a threat against Wayne.

Just hours before the shooting, on the night of April 25, Thugger was booed off the stage at Southern University in Baton Rouge, not Hollygrove as Thug initially said. Wayne fans were heard shouting "Weezy," "Hollygrove," and "Fuck you."

Wayne was performing at The Compound in Thug's hometown of Atlanta. According to the indictment, Peewee Roscoe and other members of Young Thug's Young Slime Life (YSL) branch of the Blood gang, left another ATL club, The Vault, and drove over to Wayne's show in multiple cars. Atlanta Police observed that Roscoe was driving in a 2015 Camaro and "observed that Winfrey had an assault rifle in his vehicle."

According to the indictment, "Atlanta police immediately began to escort Dwayne Carter and his group away from the Compound," after they sensed that the YSL crew and Wayne's crew were about to engage in violence. Before officers could speak to PeeWee, he drove off in his Camaro, heading toward I-285 in an effort to catch up with the tour buses carrying Wayne and his crew. According to the indictment, PeeWee's phone records show that he was on the phone with another phone that is registered to Young Thug twice that night; once when he was at The Vault, and another time when he was speeding to catch up to the tour buses.

Once the tour buses crossed the Fulton County line, their police escort left them, which then allegedly gave PeeWee and his YSL crew the opportunity to pull up alongside the buses, and open fire on the buses with two handguns, a .40 caliber and a 9mm. The buses were carrying 12 people, including the drivers. Lil Wayne, Young Money label executives and artists Lil Twist and Hood were also on the bus.

Immediately after the shooting PeeWee made a phone call. Police now allege that the person on the other end of the phone… was Birdman.

After the shooting, the two buses met authorities at the Mandarin Oriental hotel in Atlanta. PeeWee also allegedly drove to the hotel to "finish the job", according to a source. But when he saw that police were at the hotel, he left and hid his Camaro. Police recovered the car at the home of one of PeeWee's relatives at a later time.

Prosecutors are citing Young Thug's "Halftime" video as evidence that the shooting was ordered by Thug and Birdman. In the video, Thugger says that he would shoot Lil Wayne "in the noggin," with a shot of PeeWee Roscoe pointing an assault rifle at the camera. The video however, wasn't enough to charge Thug with a crime.

PeeWee Roscoe faces multiple charges, including racketeering, street gang terrorism, aggravated assault, and firearms possession. Though the indictment implies that Birdman and Young Thug were behind the shooting, neither were charged with a crime.

Fast forward to yesterday (July 17), and authorities arrested Young Thug at his Atlanta-area home. He was initially being investigated for allegedly threatening to shoot a mall cop in the head. After raiding his home, Young Thug is now being charged with felony cocaine possession, felony marijuana possession and three counts of felony gun possession.

We'll keep you updated on this crazy saga as new information comes in.