The beef between Lil Wayne and Birdman has been well publicized, and at times, very ugly. It all started in late 2014, when Wayne tweeted out his frustrations regarding the delay of his Carter V album, stating that Birdman and Cash Money Records refused to release it, despite it having been finished. A little over a month after Wayne's now infamous tweet, Weezy filed a $51 million lawsuit against the label, claiming that Birdman violated the terms of his contract by withholding the album.

Since then, various incidents, including Wayne signing on with Tidal, Birdman filing his own $50 million lawsuit against Jay Z and Tidal for releasing Wayne's Free Weezy mixtape, Wayne filing a $40 million lawsuit against Universal Music Group, and even a bus shooting, have made the rift between Birdman and Weezy one of the most compelling hip hop beefs in recent memory. And now, we have yet another chapter to add to the Birdman/Lil Wayne saga.

Earlier this month, Lil Wayne tweeted the following statement, "I AM NOW DEFENSELESS AND mentally DEFEATED & I leave gracefully and thankful I luh [sic] my fanz [sic] but I'm dun [sic]." The tweet had the hip hop world in a frenzy, leading many to think that Wayne had threatened to retirement as a result of the mental toll of the Birdman situation. Birdman reportedly isn't happy with the threat, because it makes him look like the bad guy. According to sources, Wayne is the one who has the physical copy of Tha Carter V, and he refuses to hand it over to Birdman because of their ongoing battle over Weezy's money. 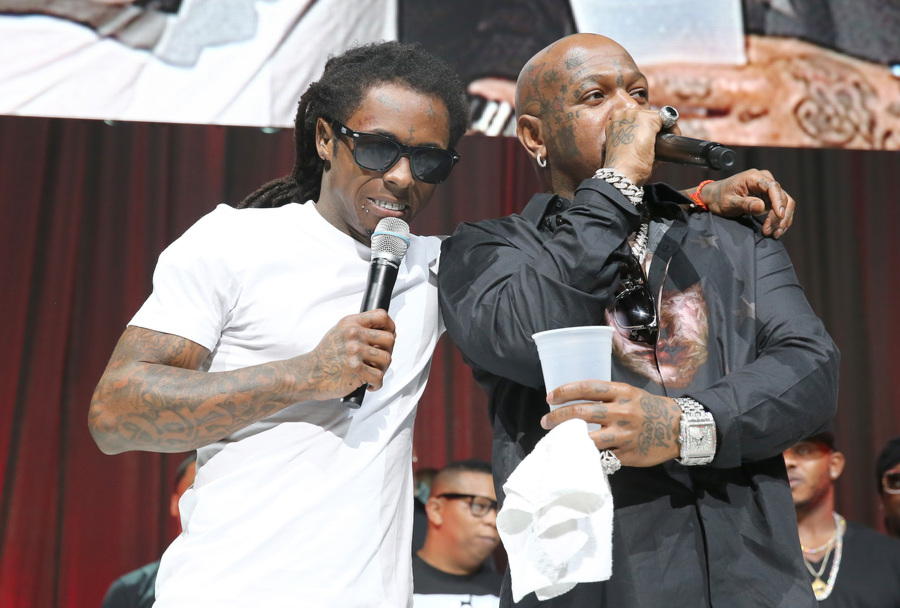 According to the original lawsuit, Wayne stated he was owed an $8 million advance for the album, in addition to another $2 million after its release. Until he receives that money, the album will never be released. But Wayne has a plan in place to get his money. James Prince, who is the head of Rap-A-Lot Records, recently got involved in the financial war between Weezy and Baby. Says Prince, whose son Jas Prince discovered Drake and introduced him to Wayne, "Where [Wayne] is weak, I am strong. He has gained an ally, and together we will get back all money owed to him and my son off the Drake albums."

This beef between Lil Wayne and Birdman doesn't look like it's going to end anytime soon. We'll keep you updated with any new information as it becomes available.