The Five Most Awkward Rap Music Collaborations Ever

Hip-hop music was once more conscious, with lyrics about political issues involving the black community. Rap groups like N.W.A expressed their frustrations in an uncensored way, with songs like "F** The Police," which is a protest song about police brutality against African-Americans. The beginning of the 90s marked a new direction for rap music, in which it became more mainstream – Puff Daddy's Bad Boy crew changed the game completely with their shiny suits in hip-hop music videos and radio hit records like "Mo Money Mo Problems" featuring the late Notorious B.I.G. and Mase.

They even crossed over to other genres with a rock remix to "All About The Benjamin's" featuring Rob Zombie and other drummers. Since then, hip-hop musicians are no longer sticking to just hip-hop, they are collaborating with artists from other genres. Some songs have ended up smash hits, while others didn't make the cut. Katy Perry's "Dark Horse" single, featuring Juicy J was a major success. But when LL Cool J combined creative forces with country singer Brad Paisley, it was a total train wreck. Our list, compiled below, consists of more rap collabs with artists you wouldn't expect.

In 1998, the "Ruff Ryder" rapper DMX gained much success with number one albums and singles on the Billboard charts. He was selling out major venues worldwide, and fans enjoyed his energetic performances with his Ruff Ryder posse. As he gained more confidence, obviously, he expanded his sound – leading him to a studio session with shock rocker Marilyn Manson to record a song called "The Omen." Manson was in the chorus. Though both artists had big names at the time, the song shockingly flopped!

Like Bad Boy Records, other rappers from different labels began to experiment with rock music, since the genre was popular in American culture. Beloved rock bands such as Linkin Park and Limp Bizkit had garnered much fame. In the late 90s, Limp Bizkit's frontman Fred Durst collaborated with Wu-Tang member Method Man. The two superstars released "N 2 Gether Now," produced by DJ Premier of Gangstarr. It wasn't that bad a record, in fact, the song got airplay on MTV.

Surprisingly, Kanye West didn't drop an album in 2014. However, he must have been working hard in the studio, as he has linked up with the former Beatle member, Paul McCartney. They have dropped two songs already this year – "Only One," which is a dedication to his daughter, and recently Rihanna released the new single "FourFiveSeconds," featuring both McCartney and Kanye. 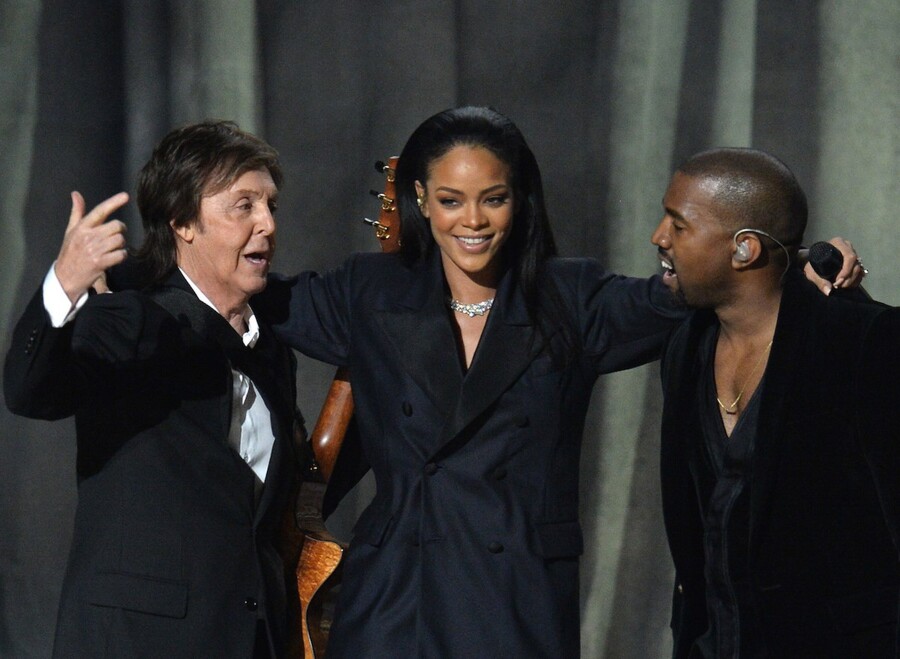 Who says country singers can't fit in with hip-hop culture? Well, apparently, rapper Nelly tested the waters to see if his song with country singer Tim McGraw would make any noise. Featured on Nelly's fourth studio album entitled Suit, "Over and Over" was a smash hit that reached number three on the Billboard charts and also topped the charts in Australia, Ireland, New Zealand and the United Kingdom. Even though Nelly's music career has slumped, he will always be known for his platinum album Country Grammar and for his game-changing record featuring country singer Tim McGraw.

In 2002, the group Bone Thugs and Harmony were becoming less popular and were preparing for their next album. During a brainstorming session, one of the members most likely came up with an awkward idea to record a song with the legendary rock musician Phil Collins, which he may have thought could help lift their careers. Out came a track called "Home," that featured a sample of Phil Collins 1985 hit "Take Me Home," and the Ohio rap group went all the way to Geneva to film their music video, because Collins and his family were there for the holidays.