You Just Won The $1.6 Billion Jackpot – Should You Take A $900 Million Lump Sum Or Annual Payments Of $50 Million?

One extremely lucky person in South Carolina is feeling pretty amazing today. Mega Millions just confirmed that a single ticket won last night's $1.537 billion jackpot. It's the second largest lottery jackpot of all time. So let's pretend for a moment that you are this extremely lucky South Carolinian. The big question you must answer today is this: Do you take the lump sum OR do you take annual payments? Historically, this question has had one extremely clear obvious answer… Take the lump sum. Yesterday in the comments area of a CelebrityNetWorth Facebook post, I repeated this advice to a number of lottery hopefuls. Turns out, the answer isn't as cut and dry as it used to be…

If you happen to be the lucky South Carolinian who won last night's $1.5 billion jackpot, your options to consider are:

Why would someone agree to a nearly 50% cut? Because of something called the time value of money.

The time value of money is a fancy way of saying that, according to history, having money today is worth significantly more than having money in the future. In other words, you should be able to turn $878 million into significantly more than $1.5 billion over the next 30 years through some very basic low-risk investments. You could also lose every penny by putting the lump sum into complex high-risk investments.

So let me clarify: Based on the historical average return of the stock market in general, the lump sum option is ALWAYS the better option if you're disciplined enough to put the money in safe, passive, low-risk investments. A "passive" investment is something you don't need to think about ever, for example an ETF that tracks the entire stock market. If your plan is to convert all the money into Bitcoin or blow the cash in some other embarrassing way, go ahead and opt for the annual payments.

Here are some simple numbers to help illustrate why a lump sum passively invested can be an amazing option:

Option 1: After paying your taxes, you invest what's left in U.S. government treasuries. Just to keep it simple, let's say after taxes you'll have $450 million (if you live in a state that doesn't have a state income tax, your number will be a bit higher). Right now the government will pay you 3.85% annually for a 30-year treasury. Barring a nuclear war, this is an absolute sure bet.

With a treasury bond, you'll get a dividend payment twice a year. Simple. Risk-free. Direct deposit. Treasury bonds are not taxed at the state level, but they are taxed federally. With $450 million invested, the government will send you $8.66 million twice a year. That's $17.3 million per year.

If you reinvest all of your dividends, after 30 years the government will give you $1.4 billion. In other words, $450 million invested with compound interest over 30 years will eventually become $1.4 billion. If you do not reinvest your dividends, the government will simply pay you back $450 million in 30 years. It's really up to you. Ask yourself how much money you want to receive in 30 years vs. how much money do you need to live each year? Either way, your life will be pretty sweet. The government is essentially PAYING YOU $17 million per year to watch over your money.

Option 2: Take $450 million and put it in a passive Exchange Traded Fund ("ETF") that mirrors the S&P 500. With this option you buy one ETF that owns a little bit of every company in the S&P 500. Your investment will go up and down over the years with the fortunes of 500 of America's strongest businesses.

Why consider this option? Because historically the S&P 500's average annual return is 10%. When you account for inflation, it's 7%. 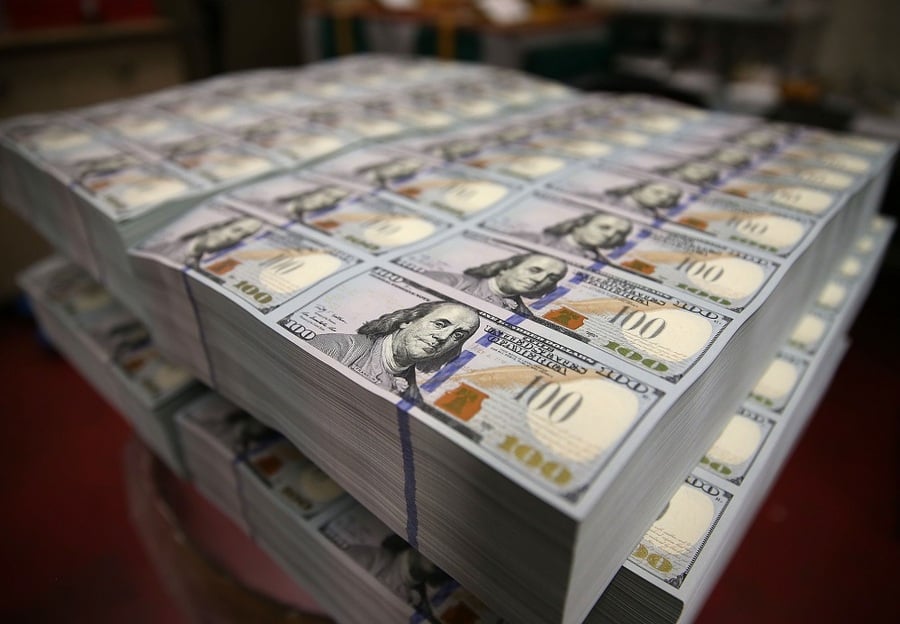 Just like with the treasuries example, $3.4 billion assumes you are reinvesting all of your dividends. This is unlikely because you'll need something to live off. But if you work with a financial planner it should be very easy to carve out whatever large annual income you want while continuing to reinvest.

Here's the catch with option 2: You have down years. Even worse, right now might be an especially bad time to go with the S&P. We're currently in the 10th year of a bull market and the S&P is near its all-time high. Historically, on average we have a huge market crash every seven years. So we're at our highest levels ever while also being three years overdue for a major crash.

If you buy today, there's a decent chance you'll actually see your principal go down significantly in the near term. In fact, there have been big chunks of time where it would have sucked to be a passive S&P 500 investor. For instance, the 15 year period between 1965 and 1980 was brutal. You would have lost HALF of your money. If you stayed in the market for the following 15 years, by 1995 you'd be back to where you were in 1965. Not exactly 7% per year.

To get a more educated opinion, today I called a friend who is a financial planner and, without even giving her my above options, I asked what she would do with a sudden $500 million windfall. Without hesitating, she replied:

"I'd invest it all in treasuries. Make $15 million a year risk free for doing nothing."

When I explained the two options I outlined above, she laughed at the idea of putting all of the money in the S&P for the exact reasons we mention above. Why risk the ups and downs of the stock market when the government is dying to pay you millions of dollars a year to babysit your fortune? Then, after thinking about it for another minute she changed her answer to:

"I'd still invest it all in treasuries, but I'd also go out and borrow $100 million from a bank and invest this chunk into the S&P. I'd let this $100m ride for the rest of my life which is hopefully 40-50 more years."

And one final point of clarification – There's a commonly held misunderstanding that if you take the annuity option and you die at some point before the 30 years are up, the payments stop. And for that reason, you should always take the lump sum. This is false. If a lotto winner getting annual payments dies, their payments continue for the duration. The money simply goes to that person's estate.