You Won't Believe The Salaries Of The Top 20 WWE Superstars!

The sport of wrestling has many fans. It is a tough sport that provides a campy entertainment factor and draws in legions of fans, both young and old, male and female. The WWE is the largest and most popular wrestling league in the world. It is also home to the highest paid and most famous wrestlers. There are more than 300 WWE events each year. The televised matches draw more than 36 million viewers in 150 countries. Unlike other professional sports where athletes receive a team trophy and individual rings, wrestlers who are at the top of their game win a belt when they win the championship. Then, the next time they wrestle, they are defending their belts in a fight to keep it or lose it situation.

There's no resting on your laurels in wrestling, or waiting until next season to defend your title. The most sought over belts in the WWE include the WWE World Heavyweight Championship, the WWE Intercontinental Championship, the WWE United States Championship, and the WWE Tag Team Championship. The best wrestlers become insanely popular and in this sport, the more popular a wrestler is, the better their chances are to not just win a belt, but hold onto it for a long time. WWE wrestlers are paid for both fighting and appearances, according to a pay structure set up by the WWE. Let's take a look at the Top 20 Highest Paid WWE Superstars… 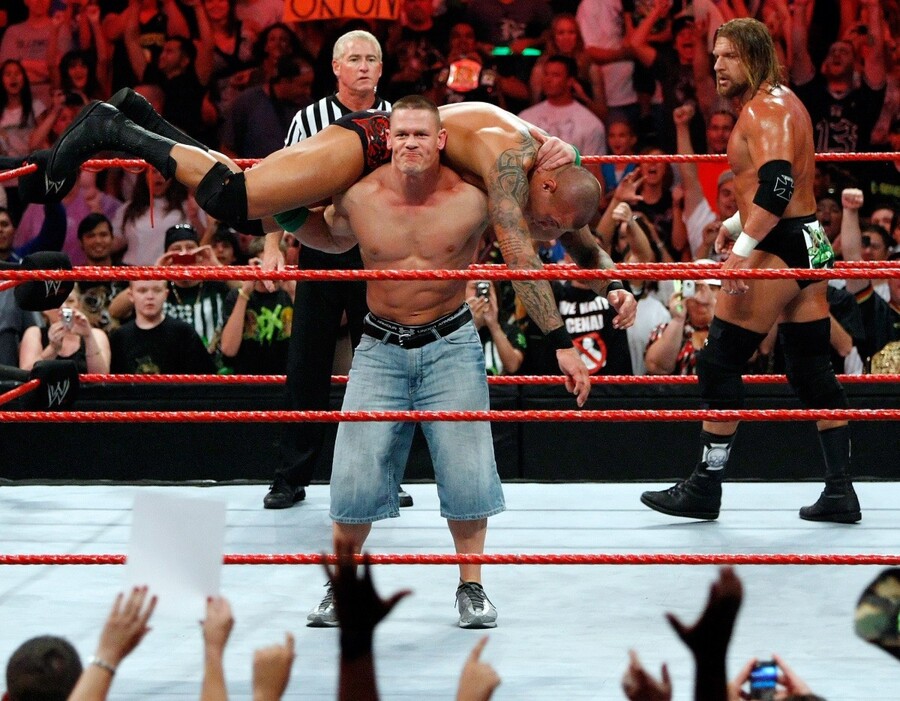 Sin Cara is not one person. Sin Cara is a personality that has been played by a number of wrestlers. The original was Luis Urive. Today, Sin Cara is played by Jorge Arias. The man wrestling under this name wears a mask that covers his entire face.

Ryback, known outside the wrestling world as Ryan Allen Reeves, is a WWE wrestler who signed up for Tough Enough 4 and made an impression. He won every fight, which led to the WWE asking him to join them. He headlined five WWE pay per view events in the early 2010s.

Rob Van Dam is an actor and wrestler whose real name is Robert Alex Szatkowski. Van Dam has been around for decades. In fact, in the late 1990s, he was a part of Extreme Championship Wrestling. He joined the WWE in the mid-2000s. He is the only wrestler in history to hold the WWE Championship, the TNA World Heavyweight Championship, and the ECW Championship.

Daniel Bryan's real name is Bryan Lloyd Danielson. He sometimes uses the nickname American Dragon. He has won the WWE World Heavyweight Championship three times, the WWE Tag Team Champion as a part of Team Hell No once, and the Intercontinental Champion once.

Goldust is the stage name of Dustin Patrick Runnels. He has been a professional wrestler for decades and has won at least 19 championships across the WWF, Total Nonstop Action Wrestling, World Championship Wrestling, and the WWE.

Dean Ambrose is the stage name of actor and wrestler Jonathan Good. He is the longest reigning WWE United States Champion. His reign was 351 days, just 14 days short of a year. Ambrose used to wrestle as Jon Moxley in Combat Zone Wrestling, Full Impact Pro, and Dragon Gate USA.

Michael Gregory Mizanin, better known as The Miz to wrestling fans, is one of the best in the sport. In his first year with the WWE he did not lose a single match for three months. When he partnered with John Morrison he won both the World Tag Team Championship and the WWE Tag Team Championship. He's won 13 WWE championships including six Tag Tam titles.

Nicholas Theodore Nemeth, better known to wrestling fans as Dolph Ziggler is one of the WWE's most exciting wrestlers. He is a four-time WWE Intercontinental Champion, a two-time WWE World Heavyweight Champion, and a one-time U.S. Champion. In 2014, Rolling Stone magazine named him the WWE Wrestler of the Year.

Mark Henry is not just a wrestler. The 44-year-old American is also a professional power lifter. He joined the WWE in 1996 when it was still call the WWF. He has been the World Champion twice and the WWF European Champion, ECW Champion, and World Heavyweight Champion each once.

Glenn Thomas Jacobs, otherwise known as Kane, is both an actor and a professional wrestler. He made his debut with the WWE in 1995. Before that he was wrestling for the United States Wrestling Association. Kane has 18 championships over his long career.

Leati Joseph Anoa'i, better known as Roman Reigns is a Samoan-American wrestler from Pensacola, Florida. As a young man, he played defensive tackle on his high school football team. He joined the WWE in 2010.

Stephen Farrelly goes by the stage name Sheamus in the WWE. He began his wrestling career in his native Ireland before moving to the U.S. In Ireland he was the International Heavyweight Champion twice. In the U.S., Sheamus has been the WWE Champ twice, the WWE U.S. Champ twice, and the World Heavyweight Champ once.

Brock Lesnar's background in MMA gives his wrestling an edge. He's been the WWE World Heavyweight Champ four times, he was a UFC Heavyweight Champion, and he was the NCAA Division 1 Heavyweight Wrestling Champ in college whine he wrestled for the University of Minnesota.

The Undertaker is the longest wrestling wrestler in the WWE. He joined the league in 1990. His real name is Mark Calaway, and in his 50s, he is one of the oldest athletes in the ring. His great career got its start when he beat Hulk Hogan in 1991 for the WWF Championship.

Triple H, whose real name is Paul Michael Levesque, is an actor, wrestler and businessman who is one of the highest paid in the WWE. He got his start as a bodybuilder and transitioned into wrestling in 1992.

Dwayne Johnson, aka The Rock is an actor, producer, and yes—professional wrestler. He rose to fame in the WWE between 1996 and 2004, becoming one of the best in the ring. After a hiatus to work on his acting career, The Rock returned to wrestling from 2011-2013.

John Cena is not only a wrestler, he's also an actor and rapper. Cena is the reigning WWE United States Champion. He is largely considered to be one of the best wrestlers of all time. He's been a big part of the WWE since 2005 and after a decade with the league, is the highest paid wrestler.