What Would It Cost To Attend Both The Mayweather Fight AND The Kentucky Derby On Saturday? Is That Even Doable?

Say you're sitting in your billiard room, contemplating what on earth to do over the weekend. You could play golf, attend a ballet, or maybe take a road trip to the beach house for some rest and relaxation. But why would you do any of that when you could also pack your bags and fly to Vegas for the Floyd Mayweather – Manny Pacquiao fight, or jet to Louisville for the Kentucky Derby, two of the year's biggest events in sports?

The Kentucky Derby at Churchill Downs is referred to as "the most exciting two minutes in sports," by the many who venture out each year to don gigantic hats, sip mint juleps, and bet on their favorite horse. It's a refined (well, depending on how many mint juleps you have), the old Southern tradition that draws sports stars, celebrities, and socialites from all over the country.

If boxing is more your speed, this Saturday night one of the biggest events in boxing history goes down at the MGM Grand in Las Vegas – the long-awaited, much hyped Mayweather/Pacquiao fight. But what would it cost to head out to the Derby or the fight in Vegas this weekend, if you were doing it in style? Here's a look at the expenses.

Which would you choose to go to on Saturday? Actually, here's an even better idea: How much would it cost to attend both the Kentucky Derby and the Mayweather/Pacquiao all in the same day?

Tickets: Get ready to throw down some serious cash on tickets to the Derby. Jockey Club Suites (5th Floor 522 Row), which means a Private Luxury Suite, can go for $4,365.00 each and up. If you're OK being a little (translation: a lot) further back, you might drop about $970. There's also the Derby Experiences package, which include Millionaire's Row ($6,999 per person, plus a gift bag) and the Turf Club, where celebs hang out for about $5,299 a pop. No word on what's in those gift bags.

Hotel: One of the best options in Louisville is the Hotel at the Seelbach Hilton, which will run you about $1,500 a night and up during the race weekend. It's a historic hotel and architectural landmark, and gangster Al Capone used to stay there "for blackjack, poker and bootlegging." You can check out Al Capone's Secret Passageways if you have some downtime after the race.

Private Jet: According to boutique aircraft broker Blue Sky Management, a flight from Los Angeles to Kentucky for the race will cost between $18,000 to $20,000, depending on factors like how many people you're bringing on board and how large the plane is. So don't forget to factor that into your budget.

Mint Juleps: This is a Derby tradition, whether you're watching from Millionaire's Row or from your beanbag at home. At Churchill Downs, one mint julep will cost about $11 a pop. For the past several years, though, Woodford Reserve (official bourbon of the Derby) has been selling mint juleps at higher prices. Much higher. They offer a limited amount at $1,000 each and another ten at $2,000 each. The cups are engraved and Woodford says proceeds benefit a charity. So what's a $2,000 cocktail if it's for a good cause?

Hats: If you're a woman, and you're going to the Derby, you better wear a gigantic hat. It's tradition. Some local milliners charge $300 or $400 for styles from their collections, and custom hats can go for between $500 and $1,000. Go big or go home, right? Get that giant hat for a thousand bucks. You can wear it again… never. 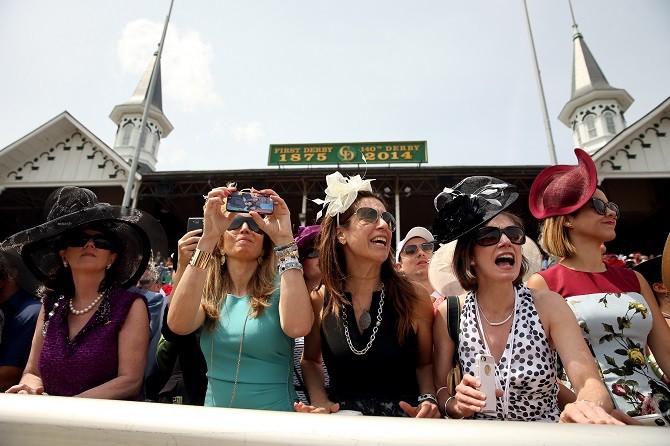 Tickets: There are precious few tickets left for the fight at the MGM Grand Garden Arena this Saturday night. Floor Side E right next to the ring are going for about $351,005.25 (yes, you read that right) and Floor Side A runs about $81,171. If you're fine with nosebleed seats, you can get those for the bargain basement price of $6,500. If the seats are that bad, you may as well watch from home. You can also buy a ticket for the weigh-in of Mayweather and Pacquiao on the Friday before the main event, which average about $150.

Drinks: Expect to pay about $10 a beer (more for beer that's not watery and weak), and the cocktails only go up from there.

Gambling: The fight is in a casino, and we all know how hard it is to walk through a casino and ignore the blackjack tables. So factor in a few thousand (or more) if you're really going in style.

Hotel: MGM Grand suites start at $5,000 and up (for Skyline Terrace) and $7,000 and up (for a two-bedroom suite) during the fight. But if you stay at the MGM you don't have to pay for a limo or an Uber to get you anywhere, so, you're saving a little money.

Dinner: MGM is home to the winner of Michelin's Three Star, Forbes Five-Star, AAA Five Diamond, and Wine Spectator's Grand Award, Joël Robuchon, named after the famed chef. Dinner will run you about $500 per person (not including wine and drinks). You'll be dining on caviar, foie gras carpaccio with truffles, lobster, and mango mousse. Perfect pre-fight food. 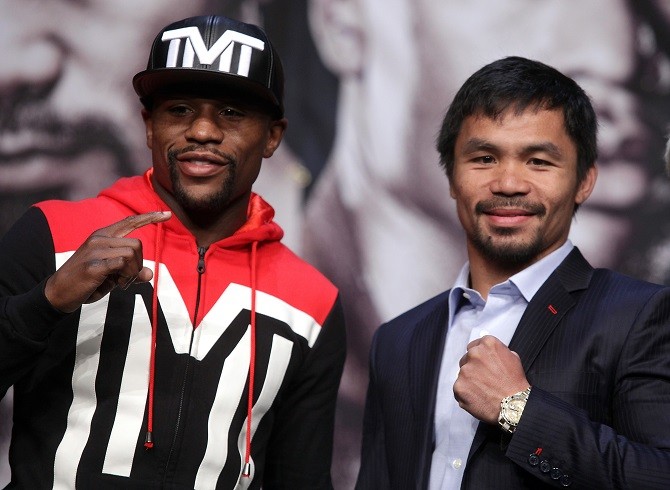 Is It Even Possible To Attend Both Events?

If you actually are interested in attempting to pull this stunt off, your first enemy is time. The Kentucky Derby is expected to go off at around 6:30 pm EST. The good news is that the main event at the derby only takes around two minutes from start to finish. The Mayweather/Pacquiao fight main event is expected to go off at approximately 8:00 pm PST. The flight time between Louisville to Las Vegas is 3 hours and 43 minutes. Assuming you leave the derby immediately after the race is complete and head straight to the private airport where your private jet is gassed up and waiting, you could conceivably be wheels up and in the air by around 7:15 at the latest. If that happened, you would touch down at McCarran airport in Vegas at 8:00 PM local time. Mayweather and Pacquiao will be entering the ring as you exit the jet and get into a waiting limo.

Using this strict timetable, you should be able to be walking into the Mayweather fight JUST before the first round starts. If you lose even 15 minutes along the way, you might not be allowed in the arena.

So How Much Would It All Cost?

Based on everything we've laid out above, what would it cost to attend both events on Saturday? Assuming someone takes a private jet from LA to Kentucky and then from Kentucky to Las Vegas and back to LA, you're looking at around $50,000 in flight costs. Sounds reasonable(ish). For tickets, you'll be forking over about $12,000 to $400,000, depending on where you want to sit. Get ready to pay about $6,000 (and up) for a comfy/luxurious bed if you stay in Vegas for the night. Ouch. If you're drinking and splurging on fancy meals, it'll be about $2,000 per person, give or take a few $2,000 mint juleps. And then, of course there's the gambling. What you spend on that is entirely up to you. Hopefully you'll win enough to cover the cost of that private jet.

When you total it all up, if you want to see both the Kentucky Derby and Mayweather/Pacquiao fight live on Saturday, you'll need to spend somewhere in the range of $80,000 on the low end and as much as $500,000 on the high end. Totally worth it! Think of the memories you'll have!