Should Wealthy Ex-Presidents Be Supported By Tax Payers After Leaving Office? NO!!! Says A Group Of GOP Senators…

You know that Aziz Ansari skit, where he's chilling in a nightclub with Jay-Z? In the skit, Jay-Z orders a bottle of vodka…and he actually owns the company that makes it! "Jay-Z signed the tab, money went back in his own pocket!" Ansari yelps. Well, what if instead of the rap mogul double-dipping, it was the four living ex-Presidents of the United States? And instead of the money coming from some classy vodka venture, it came from the taxpayers' pocket?

This conundrum has really irked a trio of GOP senators – Mark Kirk of Illinois, Joni Ernst of Iowa and Marco Rubio of Florida – and last week the three Republicans cosigned a bill to cap each president's allowance (yep, like the $5 per week your parents gave you to take out the trash) at $200,000 a year. To the legions of recent college graduates fearful of spending four dollars on coffee, that may still sound like a lot of money, but compared to how much Carter, Clinton and the Bushes have been pocketing in recent years, $200k is a drop in the bucket. 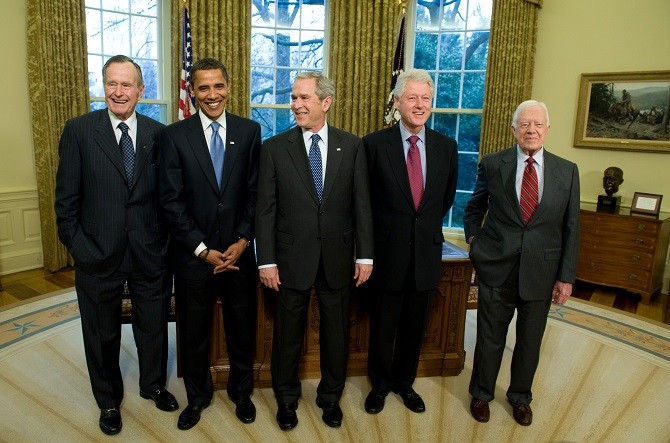 During the 2015 fiscal year alone, the Flashy Four ex-presidents spent $2.5 million dollars on travel, office space and communication bills alone. According to a report filed by the Congressional Research Service, George Bush Jr. spent over $400,000 of taxpayer money on office space last year. Although what the POTUS turned painter would do in an office, besides ride a horse between the cubicles and shoot defective printers with Saddam Hussein's pistol is beyond me. With a net worth of $35 million, you might have thought he wouldn't have needed our money for rent and phone bills.

Of the four living ex-Presidents, Jimmy Carter has the smallest net worth, at $5 million. Bill Clinton, whose charity conglomerate, the Clinton Foundation has come under fire in the past few months for allegations of scandal, is the wealthiest, with a net worth of $80 million. Between 2001 and 2013, Bill Clinton earned $106 million in speaking fees. Does he really need the US government to pay for his travel and office expenses every year? Is that a good use of taxpayer money?

"This is an issue of restoring taxpayer trust by looking at reforms in the allowances and perks given to these former presidents who generate significant incomes after leaving office," said Senator Ernst. "It is critical that we stop talking and start cutting wasteful spending."

"Taxpayers no longer need to foot the entire bill for all the endeavors presidents undertake after leaving office," Rubio added.

But rest assured, dear readers. The $200,000 allowance does not include funds allocated for security and protection; any suspicious-looking dude who tries to give Bill Clinton a hug will still be thrown to the ground by a Secret Service agent the size of a walk-in refrigerator, who is still probably not making half as much money to take a bullet as that ex-President gets paid for having a pulse.