Wayne LaPierre Net Worth And Salary: How Much Does The NRA Leader Make?

Earlier today, New York Attorney General Letitia James filed a lawsuit seeking to dissolve the NRA amid allegations that the organization violated non-profit laws by allegedly diverting tens of millions of dollars to executives, relatives of executives and other close associates. The lawsuit alleges that the NRA's longtime leader, Wayne LaPierre, and three top executives "instituted a culture of self-dealing, mismanagement and negligent oversight", while failing to properly manage the organization's finances. LaPierre reportedly used $3.6 million in NRA money over two years on unneeded travel expenses. He also allegedly used NRA funds to pay for private jet flights for himself and family members. Some of the flights he was on, some he was not. For example, he reportedly used NRA funds to pay for 8 round trip flights to the Bahamas, costing the organization $500,000. According to the Wall Street Journal, LaPierre used NRA funds to ferry his family members around the country on private jets. For example, in 2017 he allegedly used NRA funds to pay for a jet to fly 500 miles off course to pick up his niece's daughter in Nebraska on the way to an event in Dallas. He also allegedly gave himself a $17 million post-employment contract without getting approval from the NRA's board of directors. Annnndd to top it all off, he reportedly spent hundreds of thousands of dollars of the NRA's money on his own wardrobe expenses, including spending $39,000 in ONE DAY alone shopping in Beverly Hills.

[This is not going to be a political article. FYI – This will be a simple breakdown of Mr. LaPierre's current net worth, salary and other forms of compensation since those questions have been searched a lot in the last few weeks.]

For those of you who do not know, Wayne LaPierre is the executive vice president of the National Rifle Association, better known as the NRA.

Wayne LaPierre was born on November 8, 1949 in Schenectady, New York. His father worked as an accountant for General Electric. His family moved to Virginia when Wayne was 5 years old.

During Vietnam, Wayne came within inches of being drafted but ultimately was not sent to war.

He attended Siena College for undergrad before getting a master's degree in government and politics from Boston College.

He began working for the NRA in 1977. He was named executive vice president of the NRA in 1991, a position he still holds today. Through his leadership, he has transformed the NRA from a relatively small organization, to one of the most powerful lobbying groups in America. In 2018, the NRA's annual revenue topped $412 million, while expenses were $423 million.

That annual loss has been common for the NRA in recent years. In 2017 the organization spent $17 million more than it earned. In 2016 it lost a whopping $46 million, largely in an effort to bolster the Presidential campaign of Donald Trump. 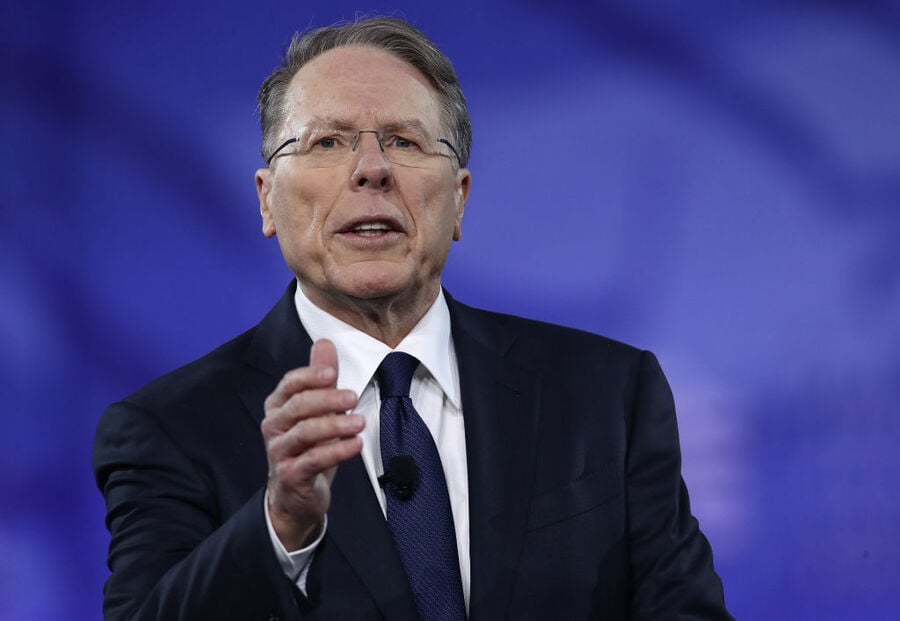 Salary: Wayne LaPierre's NRA salary starts at $985,000 per year. In most years he also typically earns a bonus of roughly $150,000. Outside of base salary and bonuses, Wayne participates in the NRA's employee retirement plan. In 2015 he became old enough to receive a $3.7 million distribution from his retirement account. So in that one year, he earned a bit over $5 million, but in most years his salary is closer to $1 million.

Interestingly, Wayne is NOT the highest paid person at the NRA. That honor goes to executive director of general operations, Kayne B. Robinson who earns a little more than $1 million in base salary every year.

Outside of his NRA compensation, LaPierre earns more than $100,000 per year in speaking engagement fees and book royalties. He has authored the books Guns, Crime, and Freedom, Shooting Straight: Telling the Truth About Guns in America, Guns, Freedom, and Terrorism, The Global War on Your Guns, The Essential Second Amendment Guide, and America Disarmed: Inside the U.N. and Obama's Scheme to Destroy the Second Amendment.

Net worth: As of this writing, Wayne LaPierre's net worth is $20 million.