What may be the most expensive automobile ever was recently sold by Rolls-Royce, as announced by a press release from the company. At the recent Concorso d'Eleganza in Villa d'Este, Italy, a custom, one-of-a-kind Rolls-Royce Sweptail was unveiled to the public, a product of one extremely upscale customer's specifications and reportedly priced at an estimated $13 million.

If early estimates of the Sweptail's $13 million price tag are accurate, then the car would easily be the most expensive car ever, surpassing the next in line by around $10 million. The car was crafted by hand in response to a particularly devoted fan of the Rolls-Royce brand:

"The mere idea of a modern coachbuilt Rolls-Royce was not enough for one Rolls-Royce connoisseur however. This individual approached the marque with his own idea of a two-seat Rolls-Royce that he wanted to be created in the here and now. That motor car is here, now and is christened 'Sweptail'. In a nod to the swept-tail of certain Rolls-Royces from the 1920s, admired by the client so much, he asked Rolls-Royce to reimagine this feature on his one-off motor car." 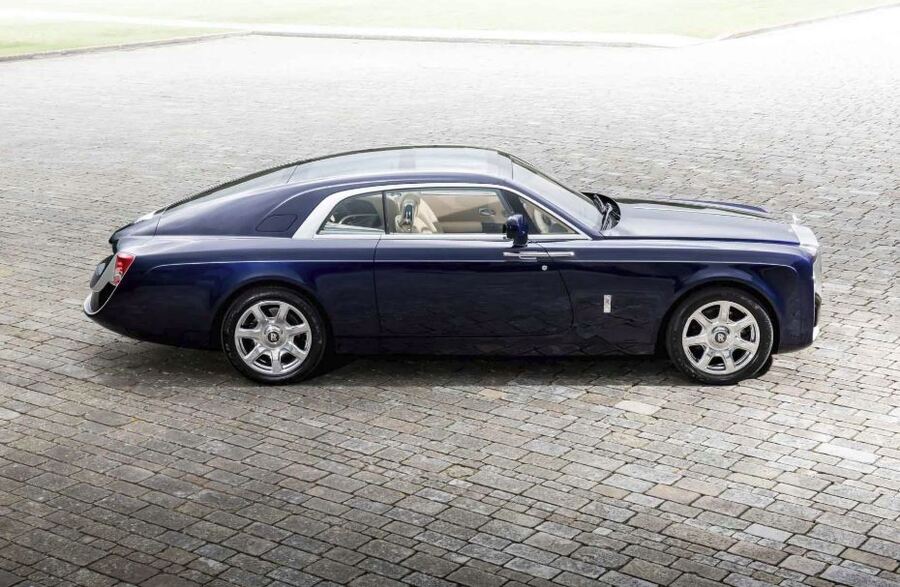 This unnamed individual is also said to be a racing yacht buff (go figure), a love which is reflected in certain aspects of the Sweptail's visual design, like the rear's rounded edges sloping up into the roof. And according to Rolls-Royce, this affluent mystery man deserves a portion of the credit for the impressive final product:

"This customer came to the House of Rolls-Royce with an idea, shared in the creative process where we advised him on his cloth, and then we tailored that cloth to him. You might say we cut the cloth for the suit of clothes that he will be judged by."

The Rolls-Royce Sweptail's killer app is its glass roof, an uninterrupted transparent curve that's purportedly "one of the largest and most complex ever seen on a motor car of any marque." This allows for a flood of natural light inside of the car, all the better for seeing its luxurious yet minimalist interior.

This car is and will remain a one of a kind piece, and appropriately enough, it also has two surprises specifically tailored for the man who commissioned it. There are two special compartments for an attaché case that's been custom-designed for the owner's own laptop, but they're a trifle compared to what's hiding behind the center console. Touch a button, and the console deploys a chilled bottle "of the client's favourite vintage champagne – the year of his birth," as well as two crystal champagne flutes. Even if at some point in the future a company develops a more expensive car, it will be a real challenge to make it as impressive as this one.