The Two Largest Drug Busts Of All Time

Law enforcement agents love nothing more than to stack a big pile of drugs onto a table while they hold a congratulatory press conference. You've seen it before. The drugs are typically stacked in a neat little pyramid with a bunch of guns and maybe even some confiscated cash sprinkled around like decorations. Sometimes the drug bust is the result of a months-long investigation with undercover officers, wire taps, maybe even an informant on the inside. Other times, the drug bust is the result of pure dumb luck. Maybe cops pullover the right car, or knock down the right door, and boom, jackpot! Maybe they get an anonymous tip.

However they happened, what are the largest drug busts of all time? What was the dollar value of the drugs that were found and what happened to the people who got busted? The answers are pretty insane.

The Hayward California Heroine Bust of 1991

Back in May 1991, U.S. Customs agents began following four suspected members of a heroin smuggling cartel. Seven months earlier, the suspected smugglers rented a warehouse supposedly to import porcelain from China. The warehouse, which was rented under the business name "Join Sun Corp", was located in the bay area city of Hayward, just a few minutes south of the city (and port) of Oakland.

Agents painstakingly observed every person and a delivery that came and went to that warehouse 24 hours a day for over a month. Finally, on Thursday, June 20, 1991, agents waited for three men to enter the warehouse before making their move, once and for all. Heavily armed cops stormed the warehouse from the front, back and roof, but the three suspects did not put up a fight and were quickly put under arrest.

Customs and DEA agents had long-suspected that this crew was importing China White heroin from Thailand instead of innocent porcelain from China. After Thailand, agents believed that the heroin was sent to Taiwan, then Oakland by barge. At the port of Oakland the drugs were offloaded onto trucks and transferred to Join Sun Corp's warehouse. Upon searching the warehouse, the agents were not surprised to find quantities of heroin. But no one was prepared for the actual amount of heroin they ended up collecting. When it was all totaled up, Join Sun Corp's warehouse was storing 59 boxes filled with 1,059 pounds of China White Heroin. 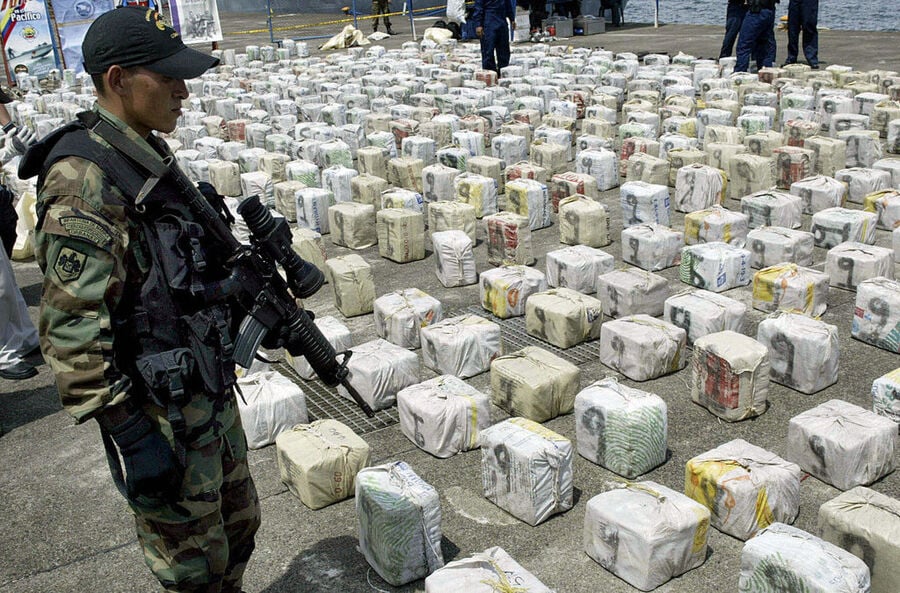 FYI, the DEA's entire budget for 1991 was $875 million. DEA agents would later estimate that this bust amounted to 5% of the world's annual production of heroin at the time. In the end, four men connected to the ring were tried, convicted and sentenced to federal prison. They each received long enough sentences that they are all still locked up today, 26 years later.

The Sylmar California Cocaine Bust of 1989

Sylmar is a quiet suburban community located in Los Angeles' San Fernando Valley. On September 28, 1989, local police received an anonymous tip from a "concerned citizen" about suspicious behavior that was occurring at a nondescript storage facility in the middle of a residential neighborhood. The tipster reported that several very large tractor-trailers had been making frequent deliveries to the storage unit. The tipster described the trucks as being "as big as two school buses".

Keep in mind that this was at the height of both the American crack epidemic and the Colombian drug cartel empire. As such, DEA agents at the time were on the lookout for exactly this kind suspicious activity. After all, who needs to have frequent "school bus" size deliveries at their storage unit?

After receiving the tip, agents followed a car that left the storage unit the next day. That car drove 30 miles southeast to a city called Baldwin Park at which point the driver noticed the tail and took evasive action. Police eventually pulled the car over and found 20 kilograms of cocaine in the trunk. That was enough probable cause to get a search warrant for the storage unit.

Armed with a search warrant and a battalion of police, DEA agents made their move two days after receiving the original tip. However, it turned out that they did not need an army of police to crack this case. The day of the raid, DEA agents used a simple bolt cutter to break a $6 padlock on the unguarded storage unit.

Once inside, the agents ended up seizing over 20 tons of cocaine and $10 million in cash.

Even years later, this incident still holds the record for being the largest drug bust of all time. The drugs had been compiled into bricks which were then wrapped in plastic and placed into dozens of cardboard boxes. If the cardboard boxes had been stacked together, ironically they would have been the size of roughly two school buses.

The amount of cocaine found in this single bust was more than all of the cocaine that was seized in the entire previous year in Los Angeles. It was so much cocaine that the DEA had to re-evaluate its method of destroying the drug. The DEA typically incinerated seized drugs in a local lab. Twenty tons was just too much for the incinerators to handle. The LA district attorney at the time claimed that the amount of cocaine that was discovered could have gone on to produce an estimated 1.4 billion crystals of crack. Of which, a large percentage would have been bound for Rick James' music studio. Notebooks discovered during the raids showed that the drugs were originally produced in Columbia by the Medellin (Pablo Escobar) and Cali Cartels. The cocaine was transported to Juarez, Mexico then El Paso, Texas then Los Angeles all by truck.

Six Mexican citizens, who had been renting the storage unit for over two years, were arrested later that day at a hotel in Beverly Hills.

A seventh man, James Romero McTague, the manager of the storage warehouse, was arrested shortly thereafter. McTague's father-in-law, a Mexican national, was the mastermind of the entire operation and the direct connection to the drug lords in Colombia.

All eight men involved were sentenced to life in prison without parole. The US District Court Judge in charge of sentencing told Mr. McTague that he was guilty of "one of the most horrendous crimes that has ever been committed against the American people."

Keep in mind that when DEA agents busted the storage unit on that fateful September day, they discovered 20 tons of cocaine. Evidence produced at trial showed that prior to the bust, this group had smuggled 77 tons of cocaine in the previous four months alone! Street value?

So there you have it! Don't do the crime if you can't do the time!