The Largest Bank Robbery Of All Time: The Time $1 Billion IN CASH Was Stolen From The Central Bank of Iraq

The largest cash robbery in United States history occurred on September 12, 1997 in Los Angeles, California. Known as the Dunbar Armored Robbery, six armed thieves swooped in just after midnight and held up LA's main armored car depot, where all armored cars pick up and drop off their cargo. It was a highly-coordinated, seemingly-flawless operation. When the job was done, six childhood friends from nearby Long Beach, California (one of whom was the regional safety inspector for Dunbar), drove off with $18.9 million in cash. Unfortunately (for the robbers), a taillight from their getaway vehicle cracked off at the scene. FBI investigators were able to determine that the taillight came off a 14 foot U-Haul truck that was rented the day before in Long Beach, under one of the robber's real names. The case unraveled very quickly after that and all six robbers were arrested, convicted and sentenced to decades behind Federal bars.

To recap, the largest cash robbery in US history required six well-armed men who flawlessly executed a plan And in the end, they walked away (temporarily) with $18.9 million in cash. So, one can only imagine what must have been required to pull off THE LARGEST cash robbery of all time – one where over $1 billion in cash was extracted from a bank.

Based on what I've seen in movies, the largest robbery of all time must have required a literal army of men, armed with hundreds of guns, helicopters… maybe even a tank. In reality? All that was required to steal over $1 billion in cash was a handwritten note, a hundred metal boxes and three trucks. Oh, it helped that one of the two men robbing the bank, had the last name "Hussein," and that the institution they were robbing was the Central Bank of Iraq… 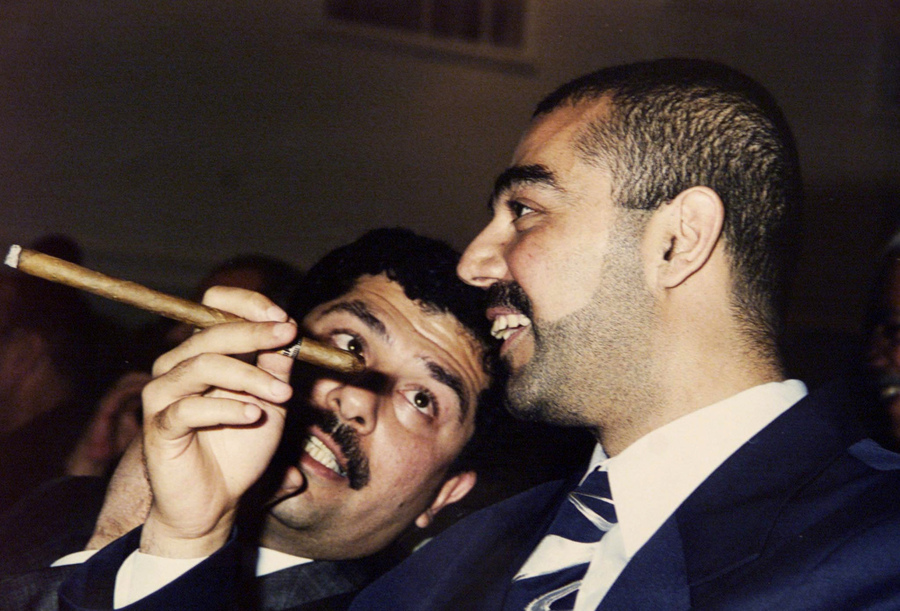 Qusay Hussein was the second son of, you guessed it, former Iraqi President Saddam Hussein. Born on May 16, 1966, Qusay lived a much lower-profile life than his famously violent older brother, Uday Hussein. Uday was an evil sociopath who raped and pillaged Iraq for nearly three decades. Uday had a penchant for kidnapping young women off the streets of Baghdad. He would bring them back to his palace and rape them. His palace contained over 1200 luxury vehicles, jewelry, priceless artwork and more.

That's not to say that Qusay was an angel. Quite the opposite, in fact. During his time as the head of the Iraqi Republican Guard, it is believed that Qusay personally ordered the murders of tens of thousands of political activists and Shiite Iraqi citizens. Possibly more. He also masterminded the irrigation of Iraq's southern marshes. That may sound innocent, but by doing so he displaced over 100,000 Shiites who had lived off the marshland for centuries.

As you may recall, the Hussein family's good times came to a very abrupt end in March 2003, thanks primarily to George W. Bush and the US-led coalition forces. Here's a timeline of those early events:

March 17: Bush announces to the whole world that "Saddam Hussein and his sons must leave Iraq within 48 hours. Their refusal to do so will result in military conflict commenced at a time of our choosing." At this point, the entire Hussein family could have packed up their things and moved to any nation that would have taken them in. Once accepted, the Husseins easily would have gone on to live as fabulously wealthy expats with enormous bank accounts, mansions, yachts, servants, cars, jewelry, harems and all the rest. Switzerland would have likely allowed them to make the move. Bahrain is the only country that publicly made an open invitation. Instead of choosing the blue pill, after Bush's press-conference Saddam made his first appearance on Iraqi national TV since the 1991 Gulf War. In the appearance, he told his generals to prepare for war.

March 20: Coalition ground troops set off from Kuwait to begin the invasion of Iraq starting from the Basra Province in the South.

The Largest Bank Heist In History

The above timeline is missing one very crucial event. Bush delivered his "48-hour ultimatum" speech at 9pm PST on March 17. That was 8am on March 18th in Baghdad. A little over one hour after Bush finished, local witnesses saw "three or four large trucks" pull up to the front of the main branch of the Central Bank of Iraq. Witnesses saw Qusay Hussein and Saddam's personal assistant Abid al-Hamid Mahmood, get out of one of those trucks and disappear into the bank.

Once they were inside, Qusay presented the bank manager with a hand written note that was marked with the words "Top Secret" (in Arabic obviously). The note, which was written and signed by Saddam himself, instructed the manager to give his son Qusay $920 million in US dollars and €90 million in Euros (equal to $120 million US at the time) from the bank's vaults. The note explained that these actions were necessary "to protect this money from American aggression."

Bank employees, assisted by Qusay's armed guards, spent the next five hours loading an endless supply of metal boxes stuffed to the brim with stacks of $100 dollar bills, into the trucks. When all the money had been meticulously counted, organized, placed into a box, and rolled out to the truck, the thieves drove off. No shots were fired. No guns were drawn. It was probably one of the least violent bank robberies ever.

In total, Qusay and his accomplice removed $1.04 billion in cash from the bank that day. This event is considered the largest bank robbery of all time.

Unfortunately for the Husseins, the massive haul of cash didn't end up doing them very much good. On July 22, 2003, both Qusay and Uday were killed in a firefight against US forces at a villa in the northern city of Mosul. The owner of the home where they were hiding was eventually granted US citizenship and received a $30 million reward for giving up their whereabouts.

Saddam would remain on the run until his capture on December 13, 2003. Saddam was found hiding at a farmhouse near his birth city of Tikrit. Saddam was immediately transported to an American base in Baghdad. He was put on trial for war crimes in June 2004 and convicted on November 5. He was hanged on December 30, 2006.

So what happened to the $1 billion in cash???

It turns out, the money didn't make it very far. On April 20, 2003, troops from the US Army's Third Infantry Division raided one of Saddam's palaces outside of Baghdad. During a sweep of the palace, one of the troops noticed a hole in what turned out to be a false wall. On the other side of that false wall, he saw dozens of those metal containers staring right back at him.

Six containers were opened at random. You can imagine their shock when the troops discovered that each container was stuffed with $4 million worth of neatly stacked $100 USD bills. After a thorough search of the entire palace, a total of 164 metal containers were found on the premises. Surely they couldn't all contain cash. Could they?

They money was transported to the Baghdad airport, where it was kept under very heavy guard. The currency was eventually flown to a secret location where it was counted. The total after every single hundred dollar bill was tallied?

The Army's senior finance officer, Major Rod King, oversaw the accounting and securing of the funds. He remarked:

"Most people don't think of finance on the battlefield. But there is a role in this conflict, and it appears we will continue to receive captured currency. We have not secured funds like this since World War II."

But wait, what about the rest of the stolen money???

If you'll recall, Qusay withdrew $1.04 billion. Third Infantry found $661 million. Where's the other $379 million? It's been 18 years since the money was first stolen from the Central Bank of Iraq and, as of this writing, not a single dollar of the missing $379 million has been recovered.

And if that's not crazy enough, in January 2012, the Pentagon admitted that it somehow managed to lose $100 million worth of the $661 million that was found back in 2003. According to the Department of Defense's Special Inspector General's office, the $100 million disappeared into thin air thanks to a "records management error". Whoops.

So there you have it. That's the story of the largest bank robbery of all time. Obviously, in retrospect, Saddam should have accepted asylum. Had he fled, he would probably still be alive today, living in a very good life in Switzerland or Bahrain.

Meanwhile, somewhere in America there are probably a few retired soldiers out there with a nice little secret cash fortune buried under the porch…