The Three Most Expensive Weddings Of All Time

Weddings are expensive. In fact, the average American wedding costs over $25,000. Couple that with the divorce rate, and you have to wonder why anyone gets married in the first place! All cynicism aside however, $25,000 looks like pocket change compared to what some rich and/or famous people spend on their wedding day. Celebrities practically line the church's aisle with cash, when it comes to how much they spend on their weddings. Kim Kardashian spent $10 million for a marriage that lasted a mere 72 days. However, Kim, and the rest of the celebrities with lavishly expensive weddings, don't even come close to cracking the list of the top three most expensive weddings of all time.

Thirty years after his mother married his father in a lavish worldwide event dubbed the wedding of the century, Prince William awaited his bride at Westminster Abbey. He met Kate Middleton in college and their on/off love affair was finally ending in marriage. The wedding was broadcast live around the world for two billion viewers. Most of the $34 million budget went to security. Some estimates put the cost of security at $32 million. The bride wore a custom-made Alexander McQueen gown. Kate, who was 29 at the time of the wedding, was a commoner who was instantly catapulted into worldwide celebrity by her marriage to Prince William in 2011. They have a son, Prince George of Cambridge, and are expecting a second child any day now. 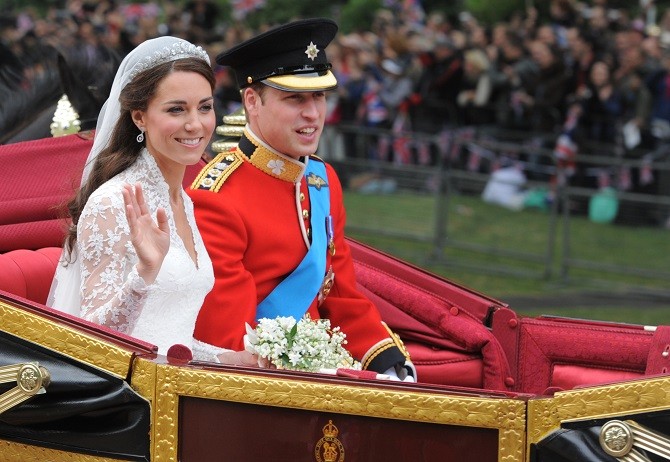 If you're looking for some creative wedding ideas, keep in mind that King Louis XIV himself would have approved of this lavish wedding. Why? A number of the six days of events took place at Louis' old pad–the Palace of Versailles. Vanisha Mittal is the daughter of billionaire Indian steel magnate Lakshmi Mittal, and no expense was spared. The 1,000 guests from all over the world received 20 page invitations mailed in silver boxes, were put up in 5-star hotels, listened to a private Kylie Minogue concert, and watched fireworks shoot over the Eiffel Tower. Top chefs catered the event. The wine was said to cost more than $1.5 million. Guests were given designer gift bags filled with jewels.

The world was captivated by Lady Diana Spencer. After all, she'd captured the heart of the long time bachelor Prince and was going to be a real live Princess. It was a real life fairy tale and no expense was spared. Diana, a pre-school teacher, walked down the aisle in an ivory taffeta and antique lace wedding gown with a 25-foot train. There were 27 wedding cakes. The main cake was five-feet-tall and took 14 weeks to prepare. Lady Diana arrived at the church in a glass coach befitting of Cinderella. The 3,500 guests awaiting the wedding of the century included most of the European royal families and hundreds of world leaders. The wedding was broadcast globally to 750 million people. Sadly, Prince Charles and Princess Diana's fairy take didn't last. They divorced in August, 1996. A year later she was killed in a car accident in Paris.