After beating the Wisconsin Badgers 68-63, the Duke Blue Devils cut down the nets in Indianapolis, and are national champions for the fifth time under coach Mike Krzyzewski. But even if the Blue Devils had lost by 50 points, they still would have helped the ACC score a huge amount of money. Thanks to a 17-5 record in the NCAA tournament, the ACC will make a minimum of $32.8 million over the next six years.

Every team who plays in the NCAA tournament earns a "unit" for its conference. And each game played counts as a unit, except for the championship game. So unsurprisingly, tournament success leads to more money.  The ACC rode an incredible 11-1 start to the tournament, meaning all of its six teams played at least two games. 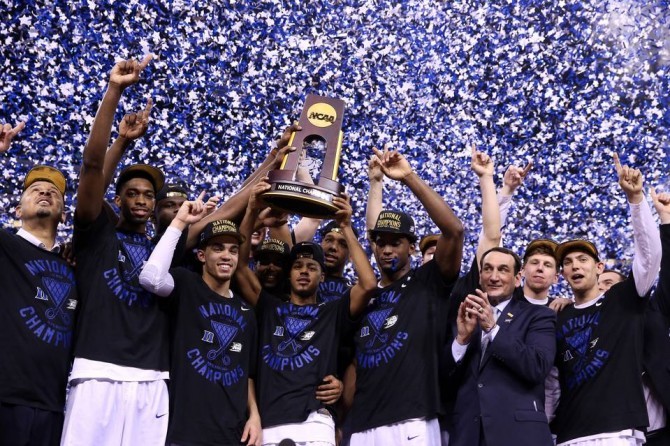 The units are paid out over the next six years following a tournament. Money earned from games played this year will start going to conferences in 2016, and will be paid out through 2021, with the money increasing each year. Next year's units are worth $260,525 apiece, which means each game was worth a minimum of $1.56 million. Through the Sweet 16, the ACC had earned $28 million for itself over the next six years, and with Duke reaching the title game, it became the first conference to earn more than $30 million in a tournament.

The conference splits its units evenly among its members, so everyone will benefit. Just a capper on a great tournament run by the conference's best team.

The NCAA's basketball fund was founded in 1991 as a way to split the tournament television money–at the time, that was worth $143 million a year. This year, thanks to a 14-season, $10.8 billion deal signed with CBS and Turner in 2011, television revenue is worth $771 million.

Here's a look at how much money some of the other conferences earned this year, along with their tournament record.