Over the weekend, the biggest high school science competition in the world reached its conclusion. It's the Intel International Science and Engineering Fair in Pittsburgh, and its top prize was snagged by one Raymond Wang, a 17-year-old Canadian science student who came up with a way to halt the spread of germs on airplanes – a hot button issue for anyone who's ever had to fly with a sore throat, a cough, or a stuffy nose. They know that being on a plane with a virus is akin to having a scarlet letter in puritan times, especially in the age of Ebola.

Basically, Wang's invention is a system of fins that can be installed on a plane's existing airflow valves, and which, when in action create pockets of air around each and every passenger on board. This results in "personalized ventilation zones" that would make airplanes less of a hotbed for airborne viruses (Ebola is not transmitted that way, incidentally, but good luck convincing your average plane traveler of that fact). Instead of those germs that fly all over the cabin whenever anyone sneezes, the germs would be sucked out of the vents through the fins and shot out into the atmosphere where they can't get anyone else sick. And if in reading that your brain automatically kicked into "too good to be true" mode, wait until you get a load of how much it costs – according to Wang's estimates, the systems would cost just $1,000 to install per airplane, and could be completed overnight. If that's so, it's more than worth the $75,000 prize Wang received for his invention, not to mention the millions more he could get from the resulting patent on the system. 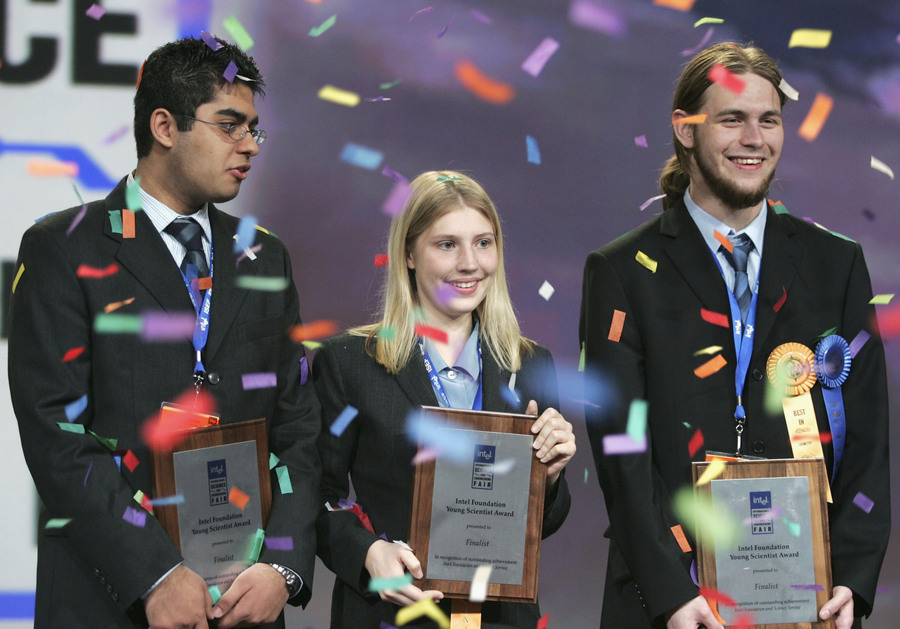 Raymond Wang's accomplishment gets even more impressive once you realize he worked on it all on his own time, boning up on computational fluid dynamics and other such subjects that aren't a part of your usual high school science curriculum, even in Canada. And it wasn't Wang's first invention by a long shot, although it is his first to win a prize at Intel's science fair. He's also developed a system for harnessing energy from rain striking the surface of a rooftop, and a garbage can that cleans itself. Clearly, this kid's brain is running just a level or two ahead of the rest of us.

The Intel International Science and Engineering Fair also awarded $50,000 to two runners-up in the contest – Nicole Ticea, a 16-year-old who invented an inexpensive alternative to conventional HIV tests, and Karan Jerath, 18, who worked on a system for recovering oil after a spill. If these kids keep it up, we're going to have a serious problem shortage by 2025 or so.