Selling This $5 Million Basket-Shaped Building Is No Picnic

The Longaberger Company has long been known as a major player in the basket-focused décor industry. Offering up a wide variety of woven baskets – from picnic to ice and practical to "for looks" designs – it may have initially come as a no-brainer to reshape their Ohio headquarters into a massive woven picnic basket. Makes perfect sense for a company that is built on people's love for baskets, right? The only problem came when they decided to sell it.

Unfortunately, as the company began major consolidations in regard to operations, the resulting shifts caused workers in the basket building to be moved to a different location entirely. Now, company stakeholders might just be regretting the decision to allow the late founder, Dave Longaberger, to remodel the office to his liking because nobody wants to buy it. Can you see why?

The uniquely-designed building, known as "The Big Basket Building" to locals and located approximately 40 miles outside of the city of Columbus, Ohio, hasn't had much luck on the market. In fact, even a steep discount on the asking price has yet to prove successful in nabbing any bites. 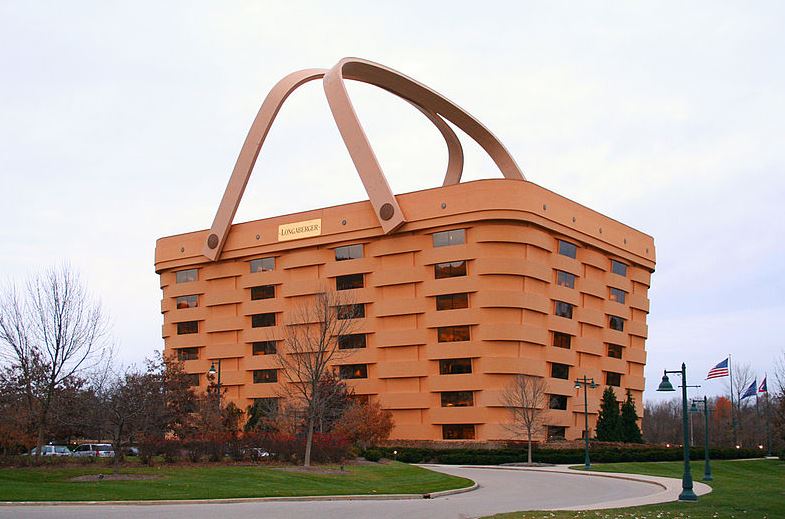 Built in 1997, the Big Basket initially hit the market in 2015. The asking price for the Longaberger-shaped offices initially stood at $7.5 million, but it seems it wasn't the price tag that was deterring potential buyers. As its  prolonged spot on the market has proven, it appears that not many companies are interested in a seven-story, 180,000-square-foot building that looks like it holds the world's best Sunday afternoon picnic. Unfortunately, however, that's exactly what then-CEO Longaberger wanted.

According to news reports from 1997, Longaberger – for whom the basket brand is named  – brought the idea up while he was in talks with designers he had hired for the project. NBBJ, the architectural design firm chosen, has designed and continues to innovate many large, attractive office buildings elsewhere, but the company obliged when Longaberger picked up one of the company's baskets and demanded, "This is what I want. Build it."

Unfortunately, consolidation efforts pushed current Longaberger CEO John Rochon, Jr., to move the company's Big Basket operations to another building. entirely. Part of the reasoning behind the move, Rochon admitted, was that the energy and spirit of Longaberger wasn't found in an office setting, but on the floor with the basketmakers.

When the decision was finalized, the local auditor's office announced that the company was behind on its taxes, an issue that could have initially allowed the Big Basket to be auctioned off for less than $600,000. It seems Longaberger has settled its dues, however, and while the company admitted an initial plan of donating the office building to the city of Newark, Ohio, plans to do so never fully transpired.

With no bites on the Big Basket, the Ohio office building remains on the market today for the discounted price of $5 million. Surprisingly, real estate listing comparisons show that this is about half the square-foot-price of other office buildings in the area. While it remains quite the steal, there is little hope that any potential buyers may be able to shed the Longaberger-shaped look of the building, since it is narrower at the bottom than the top (just like the basket it is shaped after).