For the sixth year in a row, businessman Kiyoshi Kimura left the annual New Year's fish auction at the Tsukiji fish market in Tokyo with the biggest fish of the bunch. Kimura shelled out 74.2 million yen for the giant 466-pound Pacific bluefin tuna, which comes to about $632,000 in American dollars.

That may strike you (not literally, I hope) as a pretty big fish. But while it was the biggest fish at this year's Tsukiji fish market auction, it's not even the biggest fish won by Kimura at that same event over the last six years. Kimura, CEO of Kimura Corp which counts Japanese chain Sushi Zanmai among its holdings, evidently places a high premium on being the winner of the auction's most expensive fish every year. Back in 2013, he broke the all-time record by paying 155.4 million yen, or about $1.75 million in 2013 dollars, for an even larger fish. 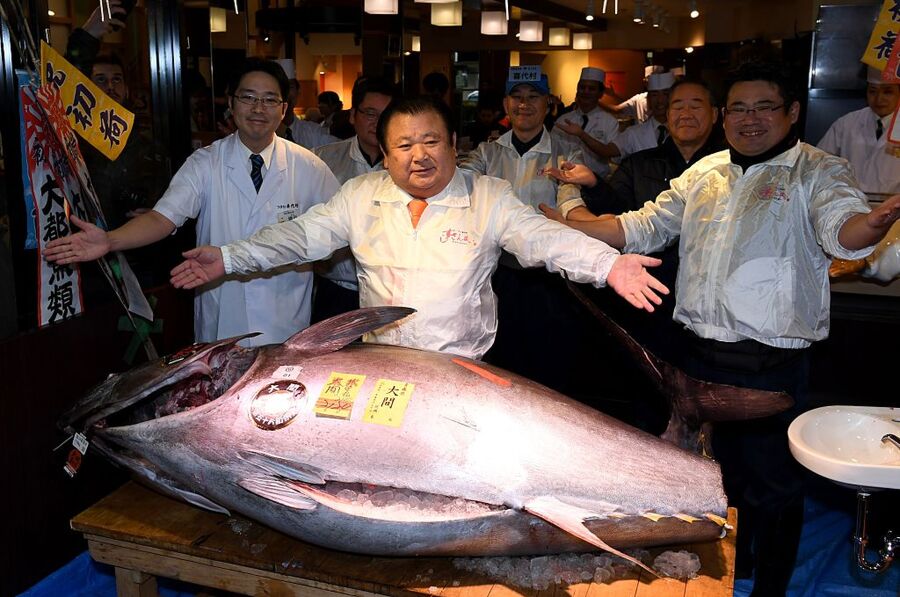 But that, as they say, is not that, because as with seemingly every story these, days Kimura's auction record-setting fish has a dark underbelly: the dwindling population of the Pacific bluefin tuna. From a conservation standpoint, Kimura's 466-pound, $632,000 fish isn't just a fun novelty, but a symbol of a growing problem surrounding the Pacific bluefin. The fish are being caught largely in juvenile stages of development owing to the preferences of the fishing industry and leading to a 97 percent drop in population according to Pew Charitable Trusts. This possible future catastrophe for the fish would be a big problem not just for the environment but for the fishing industry as well.  As the huge yearly event that the Tsukiji fish market is every year – according to Jamie Gibbon, officer for global tuna conservation at the Pew Charitable Trusts reported in The Guardian, that's what "people should be thinking about that when they see news about the auction."

And even if a businessman Kiyoshi Kimura isn't likely to support environmental regulations, even he may find himself regretting the decline of Pacific bluefin if their increasing scarcity means he has to keep coughing up more and more money to take home the biggest one every year. He's already paying a lot: At this most recent auction, his $632,000 bid came to more than $1,300 a pound.