How Severe Wealth Inequality Is Fueling The Hong Kong Protests

The Hong Kong protests, also known as the Umbrella Revolution or Occupy Central, have now gone on for over a month. For those of you who have no idea what the protests are all about, let me briefly explain: First and foremost, people are furious over a recent announcement that mainland China wants to basically hand pick all future Chief Executives of Hong Kong (their version of President/Prime Minister). Secondly, and this is an issue that has been brewing for many years, protesters are fed up by the country's horrendous wealth inequality and lack of opportunity for young people. Here's everything you need to know and why it matters…

A Tiny Bit Of History:

On July 1st, 1898, the Emperor of China agreed to lease Hong Kong to England for 99 years. The lease expired on July 1st, 1997 and from that point on Hong Kong became a "Special Administrative Region" of China. For the next 50 years, until 2047, Hong Kong would theoretically stay a democratic capitalist country.

On August 31 2014, mainland China's political ruling party made a drastic announcement. Whereas previous HK Chief Executives were chosen democratically, starting in 2016, mainland China would hand pick just 2 or 3 potential candidates for citizens to vote on. The announcement was not received warmly.

On September 22, the Hong Kong Federation of Students staged a protest outside of the Central Government Complex (basically their capital building). On September 26, few hundred of these demonstrators stormed a restricted courtyard of the Central Government Complex that just two months earlier had been open to the public. The protesters were forcibly removed by police the next day.

On September 28, large scale protests broke out all over Hong Kong. As we mentioned previously, these protests have gone on for over a month, much to the embarrassment of mainland China. 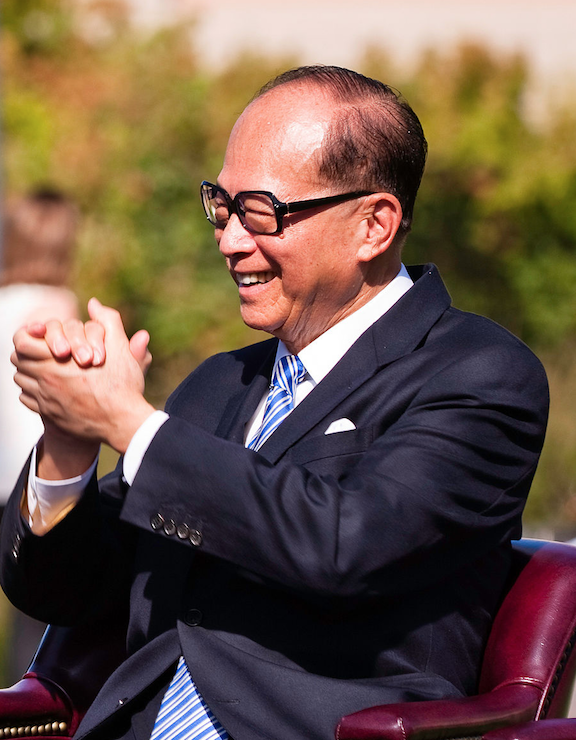 What Do Hong Kong's Billionaires Have To Do With The Protests:

There are 41 billionaires who call Hong Kong home. These 41 people control over $200 billion. That's equal to 75% of the country's annual GDP. That would be roughly equivalent to America's top 50 billionaires controlling $12.6 trillion (as opposed to a little less than $1 trillion). And of that $200 billion, 70% ($136 billion) is controlled by just 10 people. Here is a list of the 10 richest people in Hong Kong:

So what do these billionaires have to do with the protests? Alibaba CEO Jack Ma (who is from mainland China) summed up the problem pretty nicely at a recent conference:

"Part of me thinks it's not about [the] China and Hong Kong relationship. It's about the young people who don't have hope. All the big guys take the good things and the young people feel hopeless."

What Jack Ma is referring to is the fact that a tiny handful of tycoons and powerful old-money families control essentially all of Hong Kong's real estate, businesses, shopping centers, utilities… even the "public" bus system. According to the Wall Street Journal, five companies control 70% of all available apartments and houses to rent or buy.

These tycoons have seen their wealth explode over the last several decades thanks, in many cases, to some very close ties to mainland Chinese politicians. Meanwhile, over those same several decades, salaries for regular people in Hong Kong have not budged at all. Starting salary for a college grad in Hong Kong is $25,000. An average 2 bedroom apartment in the central business district can easily rent for over $4000 per month. If you're looking to buy a home in Hong Kong, good luck! Hong Kong has the most expensive real estate in the world in terms of price per square foot. A 5000 square foot home sold in August for $105 million dollars. That is not a typo.

What Do Hong Kong's Billionaires Say About The Protests?

So far, not much. Li Ka-shing, the richest person in Hong Kong (and all of Asia actually), recently released the following statement:

"I urge everyone not to be emotional. I plead with everyone not to let today's passions become tomorrow's regrets. The disappearance of the rule of law would be Hong Kong's greatest tragedy."

Meanwhile, the daughter of Hong Kong's current Chief Executive sparked fury with a series of social media posts lambasting the protesters and bragging about her own personal wealth. Chai Yan Leung made a post to Facebook in which she thanked the protesters for "all the beautiful shoes, dresses and clutches." Her instagram account featured dozens of photos showing the public servant's daughter on private jets, holding designer purses, driving sports cars and wearing all kinds of expensive clothes. All of her social media accounts have since been removed.

Thousands of people are still camping in Hong Kong's streets today. Around 100 people have been arrested, 50 people have been injured to date. Nobody really knows what's gonna happen next. Local tycoons are probably not feeling so great, because they are caught between a rock and a hard place. They can't be seen as being too supportive of either side. But their businesses are clearly taking a major hit from all the disruptions and instability. And if mainland China steps in and really drives a hard line to end the protests, it could actually end up adding even more fuel to the fire. So now you see why it's such a fascinating story. What do you think will happen? We'll keep an eye on any new developments and let you know what happens!