Recently on view in Hong Kong, and soon to be sold in New York, is a self-portrait by the legendary artist Pablo Picasso, painted in 1943 during the Nazi occupation of France when Picasso himself was reportedly under threat of deportation to a German concentration camp. It's called Le Marin, not seen publicly in over 20 years, and slated to hit the Christie's auction block next month, when it's expected to go for around $70 million. That's despite (or maybe because of?) the fact that as Christie's deputy chairperson of impressionist and modern art Conor Jordan points out, it's understandably a bit of a downer:

"You have… a slightly dark sense around the picture. It's nervous, it's on edge and slightly gloomy." 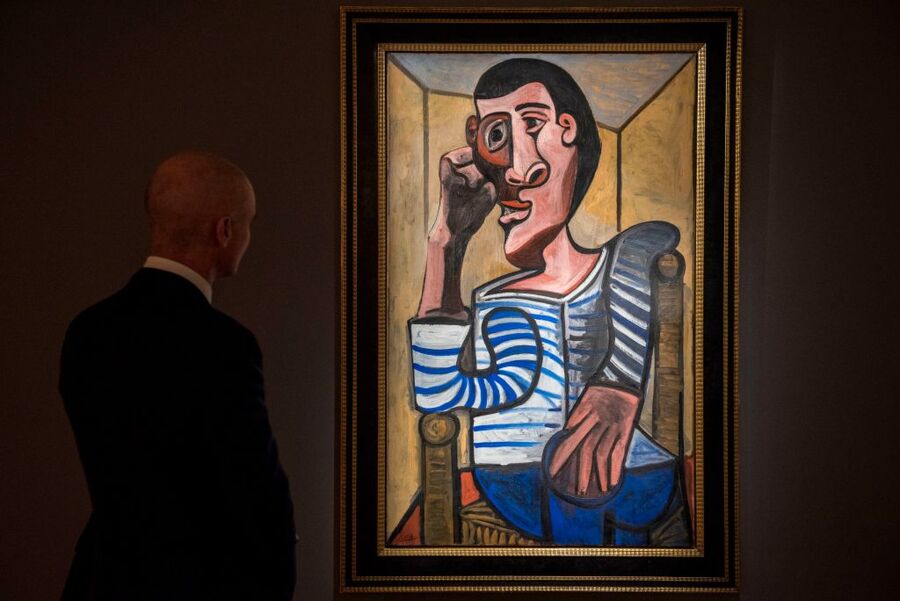 Fine art collectors aren't just interested in feel-good paintings though, and Le Marin is highly valued both for its rarity and for the fascinating history behind it. For these reasons, Christie's expects to get the aforementioned $70 million selling price, which would make the painting one of the five priciest ever sold at auction, according to the auction house's own analysis.

That includes two recent sales of Picasso's work, like The Women of Algiers (Version 0), which went for $179.4 million at a Christie's New York auction in 2015, as well as a series of 100 of Picasso's etchings from the 1930s which an American collector purchased for $2.2 million in Paris in November of last year.

The painting is assumed to be a self-portrait of Picasso himself, dressed in a blue-and-white sailor shirt and in a somewhat melancholy pose, with his head resting on one hand.

Whether or not Le Marin performs as well at auction as Christie's official prediction will become clear on May 15th, when it will go to the highest bidder as part of a sale of various Impressionist and Modern pieces.