The Pink Star, World's Most Expensive Cut Diamond, Going Up For Auction

A diamond that has already shattered price records in the past is returning to probably do it again. It's the almost 60-carat chunk of rock known as the Pink Star which, according to Sotheby's auction house and various media outlets, is hitting the auction block on April 4th in Hong Kong where it's expected to fetch as much as $60 million or more.

Even if the Pink Star surpasses the estimated $60 million figure, it will take a significant escalation of bidding for it to get more than it did back in November 2013 when the diamond was sold for $83 million. Why is it back on the block so soon? Sotheby's says it's because the 2013 buyer – a diamond cutter based in New York named Isaac Wolf – couldn't afford the price and defaulted. Don't feel too sorry for Sotheby's though, since their worldwide chairman of the jewelry division, David Bennett, is optimistic that the time is right to let go of a diamond with the Pink Star's unique qualities: "The last few years we've had colored diamonds perform extremely well." 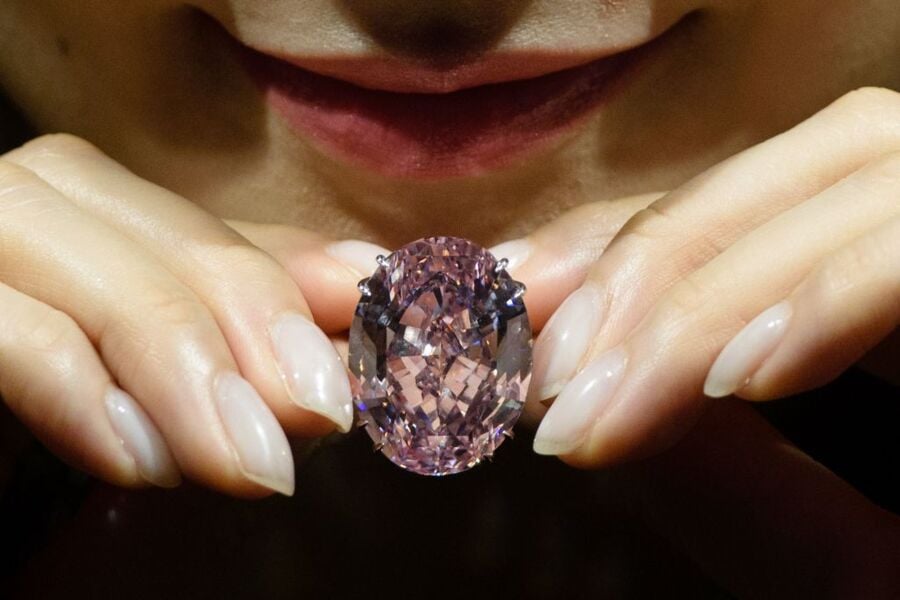 If it's a good time to sell a colored diamond, then it's by definition a fantastic time to sell the Pink Star, since it's considered to be the most valuable polished diamond ever to be put up for auction. It was first dug up in 1999 by De Beers, in Botswana, and before it was cut and polished it weighed an even more incredible 132.5 carats. For the next eight years, it was known as the Steinmetz Pink before getting its current designation. Whatever you call it, it's the largest diamond ever to earn the Vivid Pink rating – even the Shah of Lugash would be hard-pressed to name a more impressive diamond.

UPDATE: The Associated Press reports that the Pink Star has been auctioned, and this time around it managed to reestablish its status as the world's most expensive cut diamond. It surpassed the high end of Sotheby's estimate by more than $3 million, going to a buyer for $63 million – with the buyer's premium, the total cost ended up being $71.2 million.