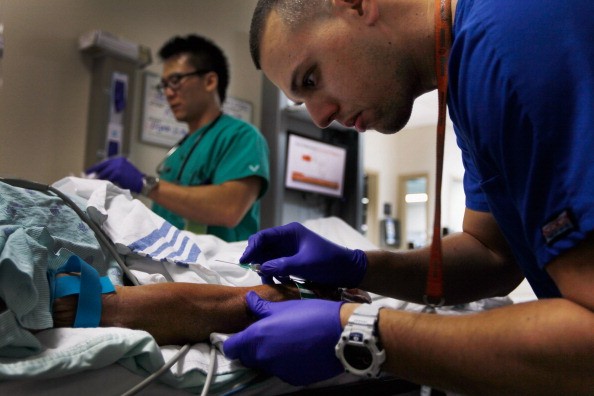 There are many different industries that employ paramedics and EMTs. The most obvious and well-known is the ambulatory services industry, which is comprised of those unsung heroes that arrive at your doorstep at 2 a.m. when emergency strikes. But there are also less obvious industries that employ paramedics and EMTs, such as local government agencies, medical and surgical hospitals, outpatient care centers, and doctor's offices. Some of the highest paid work for industries known for putting its employees at risk, such as mining, waste disposal, iron and steel mills, and medical diagnostic laboratories. Often, a paramedic certification is required to enter into the higher paying industries. EMT certification is considered to be less advanced than a paramedic certification and typically pays less and involves some of the less lucrative industries within the field.

To better answer the question how much does a paramedic make, the U.S. Department of Labor has provided a pay scale of the mean hourly wage earned by paramedics and emergency medical technicians, by industry:

Certification level must also be considered when answering the question how much does a paramedic make. Every state in the U.S. requires that a paramedic or EMT be certified. Certification levels and requirements vary, but in general, certification is progressive in nature and involves three levels: EMT-1, EMT-2, and Paramedic. Training builds and becomes more complex and thorough with every level. As such, pay increases as education level increases. Paramedics command more pay than an EMT-2, who will command more pay than an EMT-1. Experience also plays a role in salary. Those who have more time in the field will generally command more pay.