This NBA Player Turned Down $40 Million… And It's The Smartest Gamble He's Ever Made.

$40 million is a lot of money. If someone paid you $40 million, you could erase all your debts, buy homes, cars, gifts for friends, and still have plenty left over to start a dozen college funds. Even if you only took home around $20 million after taxes and agent's fees, you would still never have to work another day of your life.

But for Chicago's Jimmy Butler, $40 million is not nearly enough.

This past offseason, the Bulls offered Butler a four-year contract extension that would have paid him a guaranteed $10 million a year. That's obviously a lot of money for anyone, but it was an especially enormous amount of money for Jimmy. During his three seasons in the NBA up to that point, Jimmy had earned a cumulative $3.2 million. His annual salary had never topped more than $1.1 million. So $10 million a year, for four years guaranteed was a HUGE raise.

So what did Jimmy do? He turned it down. Jimmy instead opted to play out the remainder of his contract to become a free agent at the end of the 2014-2015 season. It's a major gamble that is still playing out as we speak. By turning down their offer, Jimmy was essentially rolling the dice that he would continue to play well and not get seriously injured at some point.

What would you have done if you were in Jimmy's shoes? I gotta say, for me $40 million in the hand is worth way more than a larger contract in the bush.

So how is the gamble working out so far? Well, based on Jimmy's playing this season, it's turning out to be an incredibly shrewd business move. Butler is averaging career-highs in a number of categories, including points per game, field goal percentage, free throw attempts per game, rebounds, and assists. He's a humble, gritty player that perfectly fits into the Bulls way of playing, and he may very well find himself on his first all-star team this year. 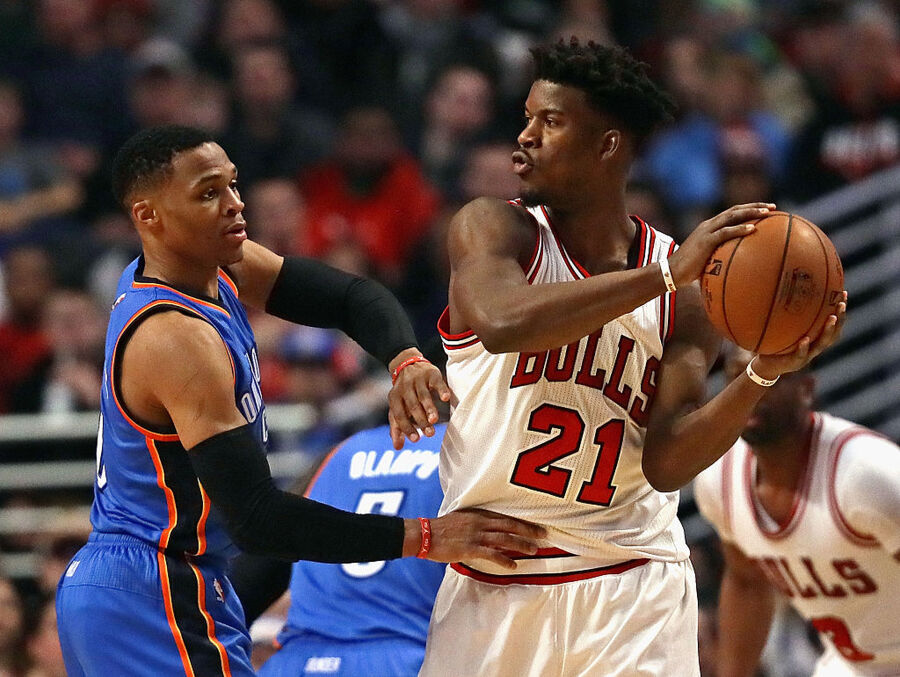 Soon, the Bulls have to decide if they want to keep him.

At the end of the season, Butler will become a restricted free agent. The Bulls can match any offer he receives from another team. The fourth-year guard will probably command somewhere between $13 and $15 million a season. Assuming he'd sign for at least four years, that's already between $12 and $20 million more than he'd be making if he re-signed with the Bulls last summer.

That extra money will put the Bulls dangerously close to the luxury tax. Teams that go over the tax receive a penalty from the league. For each dollar over the tax, a team has to pay another dollar to the league. Going $1 million over the tax to sign Butler, for instance, would actually cost the Bulls $2 million.

In the past, the Bulls have tried to avoid paying the luxury tax. They've let players who are coming off big seasons and are probably owed huge contracts, walk away. Especially if that player receives an offer from another team that is too great to match.

This offseason might be different, though. In October, the league signed a nine-year television deal with ESPN and Turner Sports that is worth $24 billion. That's an enormous amount of new money coming into the league, and as such, the salary cap is about to go way up. Currently at about $63 million, estimates are that the cap will be close to $88 million by the 2016-17 season. To make that transition a bit smoother, the NBA plans to gradually phase in the higher salary cap number.

If those plans hold up, the salary cap will be higher than it is now in this upcoming offseason. That means teams have more to spend, and players can earn more. By putting off negotiations for a year, Butler not only will earn more from his play–he should earn more simply because there's more to dish out.

Regardless of where he ends up, Butler is going to be richer than if he signed this past summer. And the leap he's made this year is incredible. He credits it to giving up TV and internet for the summer, so that he'd be forced to go to the gym more often. Imagine how many times he missed hearing "Timber" by Pitbull and Kesha!!