How Much Would You Pay To Own A Potential Triple Crown Winner?

After tearing through the first two legs of the Triple Crown, American Pharaoh is the most popular horse in town. Turns out being popular can also lead to a lot of money.

The 3-year-old colt, already victorious at the Kentucky Derby and the Preakness, has received offers of more than $30 million from breeding farms. And with interest from nearly every single farm in the world, according to one of his stable's manager, everyone wants a piece of the potentially legendary horse. But his owners aren't doing anything until after the Belmont.

In fact, the Zayats, who run the stables that house American Pharaoh, bred the colt from a stallion they owned a 75 percent stake in, Pioneerof the Nile, with Littleprincessemma, a mare they also owned. They actually sold the horse in 2013, but Ahmed Zayat felt bad about doing so and bought the horse back for $300,000.

Once American Pharaoh became the 2-year-old male champion last year, the Zayats sold a stake in Pioneerof the Nile, who earns $60,000 per live foal. In November, American Pharaoh's dame (i.e. mother) was also sold. Littleprincessemma was purchased in 2007 for $250,000; the Zayats made $2.1 million by selling her. 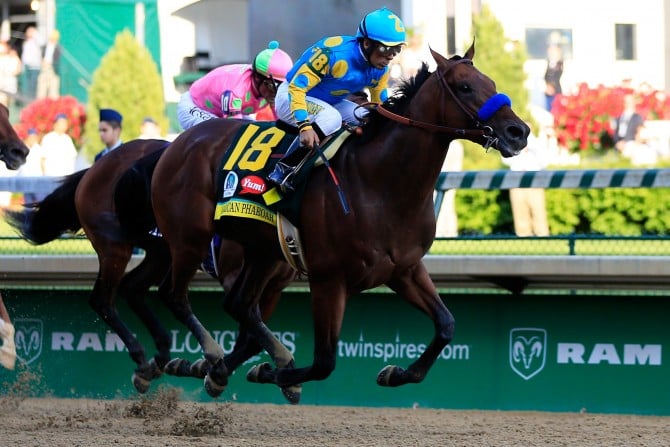 The last time a horse was sold for an absurd amount, it was Big Brown, whose breeding rights were sold for a reported $55 million just before the Preakness. Big Brown had won the Kentucky Derby. As you may remember, later that year the economy crashed, so it was a very well-timed sale.

Big Brown has actually had a disappointing crop, though. His stud fee has fallen from $65,000 back in 2009 to $8,500 this year. His only solid offspring is Dortmund, who was undefeated heading into the Kentucky Derby, and finished third in the race.

Largest Stallion Rights Of All Time (Adjusting For Inflation)

If American Pharaoh does in fact complete the Triple Crown, Zayat Stables could cash out with a huge number. $30 million is already high–with another win, that number could potentially double. The last Triple Crown Winner, Affirmed, sold for $14.4 million in 1979. Today, that would be about $46 million, factoring in inflation.

American Pharaoh also has a full sister, who could be worth more than $4 million. And as part owners, the Zayats will earn a portion of Pioneerof the Nile's increased stud fees for next season. Offers have already come in at $150,000 for that–150% higher than this season. Only one other horse in the stallion world stands for more than that: Tapit makes his owners $300,000 per live foal.

Even if American Pharaoh doesn't pull off the Triple Crown victory, he's going to make his owners a lot of money.