How Much Money Would It Take To Get You To Play QB For The Browns This Weekend?

Pretend for a minute that you are an NFL quarterback. Now also imagine that you and your entire family are on vacation in Palm Beach. You're enjoying the warm weather, spending most of the day kite surfing with your kids, and generally forgetting about all the cares in the world.

Next, imagine that you receive a phone call. The voice on the other end needs you to come to Cleveland, immediately.

You'd probably respond "No way!" and attempt to end the call. But then the voice on the line offers you $53,000 to come to Cleveland for just one week. Would that make you pack your bags?

Such was the life of Rex Grossman this week, who turned down an offer from the Cleveland Browns after the team came calling in search of a quarterback. Original starter Brian Hoyer was pulled for being ineffective and is battling a shoulder injury, backup hot topic Johnny Manziel has a hamstring injury that's ended his season, and the only other quarterback on the roster is an undrafted free agent named Connor Shaw, who was cut earlier in training camp, but then re-signed to the practice squad. It's fair to say the Browns are desperate.

Grossman was also a member of the Browns during training camp before he, too, was released. And with no other team offering him a roster spot throughout the season, it looks like Grossman took an early vacation with his family. His whole family. 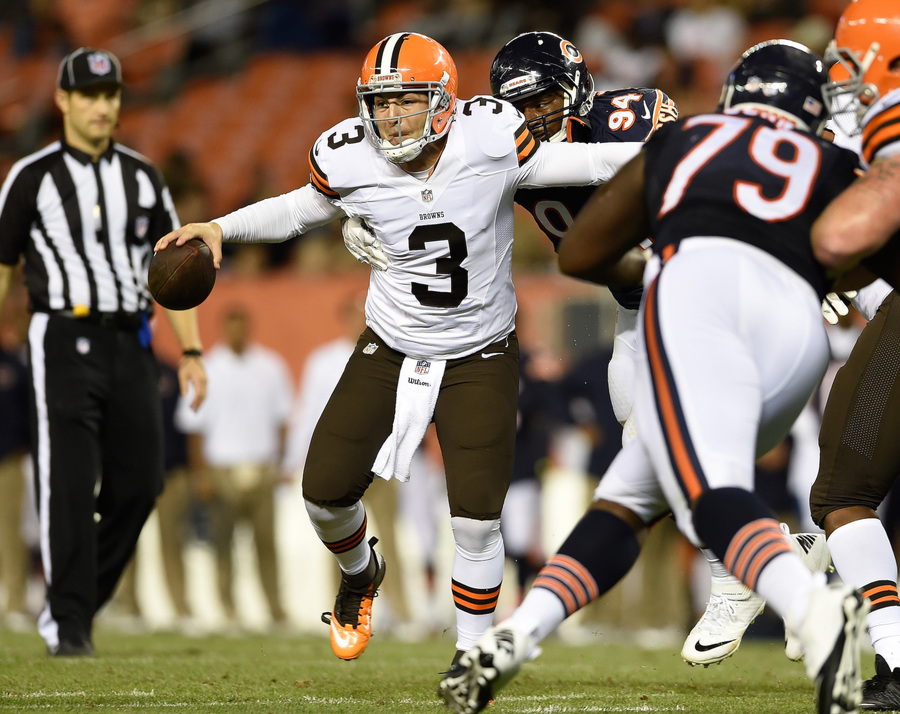 Despite not throwing a pass in an NFL game since 2011 (as a member of the Washington Redskins), Grossman has amassed twelve years of service in the league. He earned a little more than $13 million in salary during his career and as a veteran with 10+ years of experience, he would be entitled to at least 1/17th of $910,000 to play for the Browns this weekend. Some quick math calculates that out to $53,529.41. That's $53k for just one week of hanging out in Cleveland, holding a clipboard and maybe looking over some notes and game film.

But, in what might be the ultimate example of putting family first, Grossman said no!!! Good for him.

In case you're wondering, here are a list of some things Rex could have bought with his one-game paycheck:

– Four years of college for one of his kids at his alma mater, the University of Florida (assuming they lived at home) or two years if living on campus ($47,720 and $41,100 value, respectively)

– The Absolutely Ridiculous Burger from Mallie's Sports Bar & Grill in Detroit, which weighs in at over 330 pounds; paired with two bottles of Inglenook Cabernet Sauvignon Napa Valley ($2,000 for the burger; $24,675 for each bottle of wine, grand total of $51,350)

The point is, there are lots of things Grossman could buy (and probably should buy, if he really likes alpacas and large burgers), all for spending a week in Cleveland, and MAYBE having to appear in an NFL game.

Or, he could go the charitable route, which is something Oakland Raiders offensive lineman Menelik Watson did. Through Jay Glazer's Touchdown Dreams program, Watson befriended a four-year old girl named Ava, who was born with half a heart and has had 14 surgeries. Ava visited the team, was made captain for the day, and received a signed helmet to go along with all sorts of stuffed animals.

That's a terrific gesture already, but Watson went one step further–or in this case, 18,000 steps further. Menelik decided to donate his entire paycheck from last week's game to Ava's family. He makes $36,944 per week; after taxes, around $18,000 went to Ava. Watson said he wanted her to have the greatest holiday. A truly wonderful act!

If you were in Grossman's shoes, would you ditch the family vacation for a week to collect some money? Or would you stay in a much warmer climate with those you love, doing activities you planned (and paid for) months in advance?