This Miracle Service Blocks Unwanted Robocalls – I Had To Share This

Ok so this isn't a standard Celebrity Net Worth article. It's also gonna sound like I'm getting paid to advertise this robocall-blocking service. But let me just make it clear now: I am not getting paid to endorse this service Nomorobo. Nomorobo is completely free and completely life changing for anyone who gets bombarded with unwanted spam phone calls on their land line. I know, I know… who has a land line still? Well, my parents do. Apparently a lot of people still have not switched completely over to cell phones. Maybe even your parents. So if you or someone you know has ever complained about getting robocalls trying to push fake credit card companies, life insurance, free vacations (that aren't free), political surveys, virus protection software, etc… please send them this article so we can put these losers out of business!

So, for a variety of unimportant reasons, I've been living with my parents for the last month. Yes that's right, I am a 32 year old internet blogger who lives in his childhood bedroom. It's temporary, but I am enjoying my mothers amazing dinners pretty much every night. I'll give you a few moments to laugh at that image… 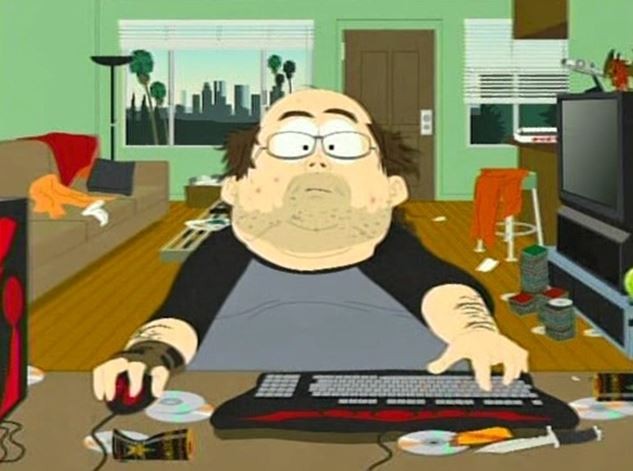 Artist Rendering – Not A Real Photo of Brian

One thing that has driven me insane the entire time I've been working from their house is the absolutely absurd number of robo-spam phone calls they get on their land line. No exaggeration, I'm talking about AT LEAST 20 calls a day from people peddling a dozen different bullshit products and services, most of which are just phishing for credit cards. To make matters worse, many of the calls sound fairly serious and legit. For example, at least 2-3 times a day someone "from the credit card company" calls "with some very important information about your account balance". SCAM. Another call that comes in at least once a day features someone "from the Microsoft company" who "needs to warn them about a virus that is on their computer right now". SCAM. And don't even get me started on the never-ending political calls during the recent election. SCUM. It's pretty disgusting and I hope the people who operate these businesses find themselves in a special little section of hell some day where a phone rings every 10 minutes with a spam offer to get them up to heaven in 24 hours if they give over a credit card number and a pint of blood.

Anyways, the craziest part of this whole robocall situation is that my parents had gotten to the point where they stopped answering their phone entirely. Whenever the phone rang, I would naturally go to pick it up, and they would quickly yell "Don't answer it! It's a spammer!" My parents had gotten into the routine of letting every single call that came in, go to voice-mail.

And if you're thinking I should have just signed them up for the do-not-call registry, I did do that a long time ago. In my experience that registry is about as useful as Heidi Montag on an episode of The Weakest Link. Oh and btw, according to Federal Trade Commission rules, the do-no-call registry does not block unwanted political phone calls. So even if that registry worked (it doesn't), you'd still get tons of political calls.

Thankfully I just found out about a service that I would describe as nothing short of a miracle. Everyone with a land line who is reading this article needs to stop what their doing and immediately sign up for a service called "Nomorobo". Get it? No more robo? I learned about this service while staying with a friend last week. And now I have to share the results.

It's been 24 hours since I signed up my parents with Nomorobo, and we have not gotten a single robocall. Like I said, that's down from roughly 20 per day before. It's been so quiet all day that it feels like the phones might be broken or something.

Nomorobo is the brainchild of a brilliant hero named Aaron Foss. Aaron's service won him a $25,000 prize as part of the 2013 "FTC Robocall Challenge". Here's how it works: Nomorobo uses crowd-sourcing and simple algorithms to compile a huge, real-time database of phone numbers associated with spammers to block them from getting through to consumers. It accomplishes this feat in three ways: #1) Right off the bat, when you sign up for the service your phone blocks out all phone numbers that are well-known to be scammers. #2) Next, as the scammers change numbers to try and get around the blocks, Nomorobo users can report a bad phone number and once enough people have reported a number, the Nomorobo team verifies it's a scammer and the number gets blocked forever. #3) Nomorobo can see when one number is simultaneously calling lots of people at the same time, and when that happens Nomorobo answers the call, your phone stops ringing and the scammer gets blocked.

Here's a video that explains how Nomorobo works:

Setting up Nomorobo took less than five minutes. From what I saw, it's available to pretty much every land line phone company out there. Unfortunately it's not available on cell phones yet. When it is, I will be the first person to sign up.

So there you have it. I hope you don't mind me using CNW to promote this service. I just had to share how much of a difference it made! I hope it makes the same difference for you or your parents and puts all these scammers out of business forever!