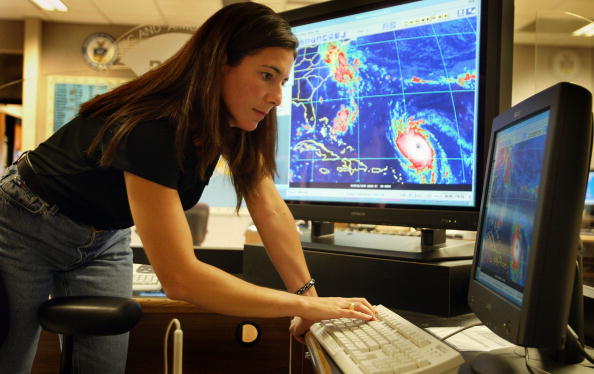 Meteorologists forecast the weather. Many television and radio weather forecasters are professional meteorologists, while some weather forcasters are reporters with no meteorological training. Meteorologists may work in radio and television stations, research services, industrial enterprises, government agencies, private consulting and utilities, and in education. Meteorologists use weather information and atmospheric research which may be applied to air and sea transportation, defense, air-pollution control, agriculture, forestry, and studying trends in the Earth's climate, such as droughts, ozone depletion, and global warming.

Approximately 34 percent of atmospheric scientists are employed by the Federal Government, the majority of them work in the National Weather Service. Meteorologists must have a bachelor's degree in meteorology as minimum educational requirement, or a degree in a related field with courses in meteorology. A master's degree may be necessary for some positions. A Ph.D. degree is necessary for basic research positions. Competition is expected to be high for meterology jobs, with the number of graduates from college and university atmospheric sciences programs to exceed job openings in the industry. Prospective job hunters who have graduate degrees will have an advantage over those with only a bachelor's degree. Atmospheric scientist jobs are expected to grow 15 percent over 2008-2018.

How much does a meteorologist make per hour?

A May 2009 Bureau of Labor Statistics report shows the median hourly wages for meteorologists was $40.94.

Other Professional, Scientific, and

How much does a meteorologist make per year?

The median yearly salary for meteorologists according to a May 2009 Bureau of Labor Statistics report was $85,160.

Other Professional, Scientific, and