Entrepreneur Wang Jianlin just became China's richest man and he certainly knows how to live the good life. He loved his private jet so much that he went out and bought a second one. No big deal. They were a bargain at just $49 million each. That's chump change to Wang who currently has a net worth of $46 billion. When he founded his company, Wanda, in 1988, it was to redevelop houses in the slums of northeast Dalian. Now, Wang owns five-star hotels, shopping malls, movie theatres, a chain of karaoke bars and more. Twenty-eight years after founding his company, it has assets of $82 billion and profits of $38 billion. And the best part? That $46 billion fortune started out with a $122,000 loan.

Wang Jianlin was born into a life that was very far away from the glamorous and jet set life he leads today. He was born in Cangxi County in October 1954, soon after the Communist revolution in China. He is the oldest of five brothers. His father was a war veteran of the Red Army. In 1970, Mr. Wang followed in his father's footsteps and joined the People's Liberation Army. He was 15 years old. Wang became Platoon Leader soon after joining the Army, and eight years later was selected to attend Dalian Army School, where he eventually rose through the ranks to become deputy director. 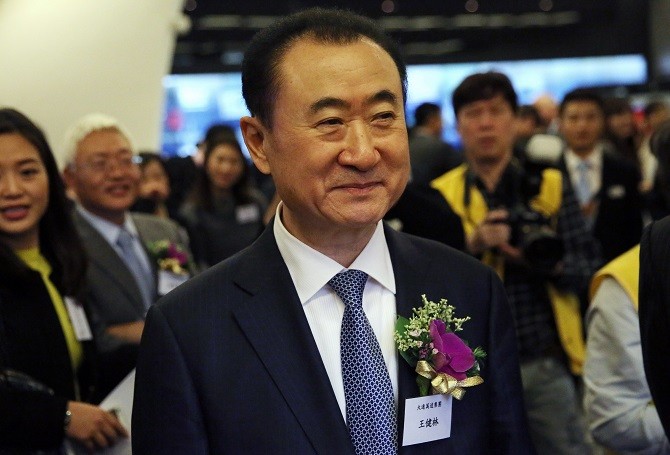 In 1988, he left the army with an honorable discharge after 16 years of service. His first job after the army was as a government clerk. Through this job, Wang become familiar with a government contractor that was mired in debt. He began volunteering at the company in his free time and eventually took over completely.

Using $122,000 loan, Wang appointed himself General Manager in 1992. He simultaneously changed the name of the company to Dalian Wanda. Over the next two decades, Mr. Wang grew the company into a highly diversified conglomerate that owned assets in shopping malls, commercial real estate, tourism and more. Today Dalian Wanda owns 104 Wanda Plaza shopping malls and 72 luxury hotels in 111 Chinese cities.

Along the way, Wang has become incredibly wealthy. Two years ago, he bought the luxury British boat builder, Sunseeker International, for $490 million and a Picasso painting at a Christie's auction for $27 million. Mr. Wang is a big futbol fan, so he he plunked down $52 million for a 20% stake in the Athletico Madrid soccer team. Today he attributes much of his success to his military past.

In May 2015, Mr. Wang became China's richest man. He displaced his business rival, Li Hejun, for the title, and is also now the 10th wealthiest person on the planet.

Mr. Wang has conquered China and now he's set his sights on the rest of the world. His plans are to make Wanda as well known as Google, Walmart, or IBM.

Mr. Wang also likes to throw a good party. The magnate celebrated his $1.2 billion acquisition of Infront Sports and Media – the company that controls the marketing rights to the FIFA World Cup, with a lavish party at the Sofitel Hotel in Beijing, where the champagne flowed and the flamboyant tycoon was surrounded by a bevy of beautiful women.

Over the past 25 years, Mr. Wang has shown himself to be a prodigious collector of art. He's bought up some of history's greatest painters' masterpieces as well as ancient Chinese ceramics and calligraphy. In November 2013, he spent $27 million to acquire Picasso's "Claude and Paloma" from Christie's in New York. The painting had been estimated to sell for a "mere" $12 million. Just last month (May 2015), he paid $20 million for Monet's "Bassin aux Nympheas, Les Rosiers" at Sotheby's. Reportedly, he also paid just over $550,000 for "Gu Qin Tu," a 100cm by 60cm painting of a bird. That price tag makes it the most expensive painting ever based on price per size.

Mr. Wang has grand plans for China to become the world's best movie market and has invested $7.7 billion in a 20-studio movie complex. He aims to be bigger and better than Hollywood, while courting Hollywood celebrities at the same time. The star-studded launch party in Qingdao was attended by Nicole Kidman, Leonardo DiCaprio, Ewan McGregor, and Harvey Weinstein. Mr. Wang hopes his Qingdao Oriental Movie Metropolis Complex, which is set to open in 2017, will help China become the largest movie industry player in the world in just five years.

Wang Jianlin is married with a grown son, Wang Sicong – but that's a whole other story.