This Incredibly Rare Diamond Is Too Big To Accurately Price

By Joseph Gibson on December 3, 2015 in Articles › How Much Does

Look out, Josephine, there's a new diamond on the block that makes you look like a cheap tie tack. OK, that might be an exaggeration, but when you look at the recently unearthed Lucara Diamond, it's hard not to exaggerate. It's a huge 1,111-carat diamond, which makes it the second-biggest diamond in history, and the biggest ever found since 1905.

There is no standard per-carat price for diamonds, as each one is valued by market forces and more vague qualities, like the beauty and "illusion" of the diamond itself. Consequently, the CEO of mining company Lucara, William Lamb, was unable to attach a specific price to the huge rock. Some reports have come in placing the diamond's value in the neighborhood of $60 million, and Lamb himself said in an interview with CNN Money that he'd already gotten an offer via email to buy the gem for $40 million. But naturally, the actual value of the stone won't be determined until a buyer is able to examine it up close, for a complete evaluation. 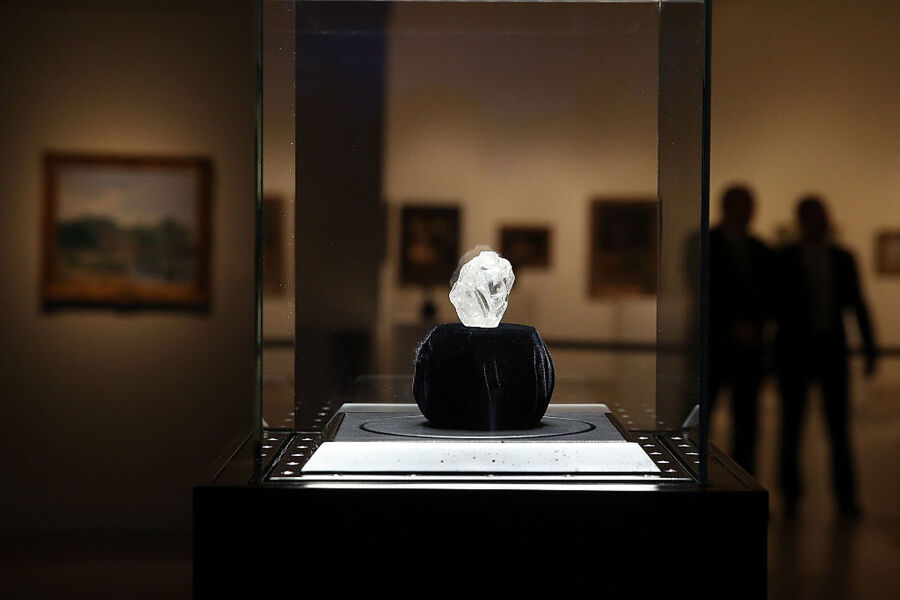 It is true that most diamonds can be given more or less standard price or range, thanks to high-tech machines that can precisely measure the clarity, color, and internal flaws of the diamond in question. But this gem is so big, it can't fit into any of these finely-calibrated machines, which means that any potential buyer will have to resort to methods that were in favor years ago before such machines existed. It adds yet another element of mystique to the already-legendary diamond, which will surely cause its value to go up even higher.

It won't be some rich guy's eyeball alone that determines what the eventual selling price of the Lucara Diamond will be, however. The government of Botswana, where the gem was found, will get a ten percent cut of the proceeds, plus a ten percent export tax once it leaves the country. And Christopher Gemerchak, diamond expert and editor of The Diamond Loupe, told CNN Money that it will, in all likelihood, require a whole panel of experts in Antwerp, Belgium to determine just how much this diamond is worth. That's because Antwerp is where "the people with the greatest expertise are located, as well as financiers who work with the evaluators and ultimately determine if, and how much, they would bid."

It's been quite a couple of weeks for Lucara, which also announced their recent acquisition of two other "exceptional" white diamonds from the very same mine this massive rock came from, at 813 carats and 374 carats. Lamb acknowledges that putting all three up for sale at the same time would be bad for business, so it may be a while before we find out how much the second-biggest diamond in the world is really worth – on the other hand, that means you have time to start saving up.