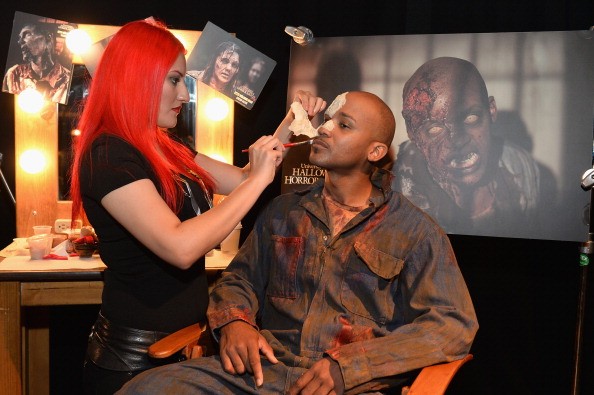 How much does a makeup artist make? Alberto E. Rodriguez/Getty Images)

Stage makeup is used in conjunction with stage lighting to highlight the actors' faces, defining the eyes, lips, and highlight the facial structure of the actors face. The stage makeup allows the actors' expressions to be visible to the audience from stage to seating distances in a theatre.

The use of special effects techniques enhance physical features, exhibiting metaphysical characteristics as well as fantasy makeup. Prosthetics and plaster casting are used for projects requiring non-human appearances. Accents to this kind of makeup include theatrical blood and ooze.

Airbrushing uses a small air-operated device that sprays alcohol and water-based makeup by a process of nebulization. This technique was used in the film version of Ben-Hur, and has recently been re-popularized by the advent of Digital Photography and HDTV. Liquid Foundations with thin texture are applied with the airbrush product.

High Definition is an art which involves the use of ingredients such as minerals and light reflectors, giving the skin a flawless finish. This technique was developed due to High Definition mediums and the higher cost of airbrush makeup.

Analyze a script, noting events that affect each character's appearance, so that plans can be made for each scene.

Evaluate environmental characteristics such as venue size and lighting plans in order to determine makeup requirements.

Write makeup sheets and take photos in order to document specific looks and the products that were used to achieve the looks.

Demonstrate products to clients, and provide instruction in makeup application.

Apply makeup to enhance, and/or alter the appearance of people appearing in productions such as movies.

Assess performers' skin-type in order to ensure that make-up will not cause break-outs or skin irritations.

Cleanse and tone the skin in order to prepare it for makeup application.

Provide performers with makeup removal assistance after performances have been completed.

Alter or maintain makeup during productions as necessary to compensate for lighting changes or to achieve continuity of effect.

Duplicate work precisely in order to replicate characters' appearances on a daily basis.

Design rubber or plastic prostheses that can be used to change performers' appearances.

Attach prostheses to performers and apply makeup in order to create special features or effects such as scars, aging, or illness.

Confer with stage or motion picture officials and performers in order to determine desired effects.

Create character drawings or models, based upon independent research, in order to augment period production files.

Advise hairdressers on the hairstyles required for character parts.

Theatrical and performance makeup artists generally study postsecondary training at a school of cosmetology or other specialized makeup school. These types of programs may require a high school diploma for admission. Courses in art and design may be helpful for makeup artists. Some states require makeup artists who also style hair to have a state license.

How much does a makeup artist make per hour?

A May 2009 Bureau of Labor Statistics report shows the median hourly wages for makeup artist was $21.64.

How much does a makeup artist make per year?

The median yearly salary for makeup artist according to a May 2009 Bureau of Labor Statistics report was $45,010.